Read more
You are at:Home»Film»The Edge Talks To: Jonathan Holmes
By Scott Williams on July 19, 2016 Film

Ahead of the release of his latest film, The BFG, The Edge caught up with actor Jonathan Holmes (who plays the giant, Childchewer) to discuss working with Steven Spielberg, motion-capture and the mystical ways of giant language.

The Edge: So, obviously you have two big names attached to the project [Steven Spielberg and Mark Rylance], what was it like working opposite Mark, and how was the experience under Steven’s direction?

Jonathan Holmes: “Well, you know what, they were both absolutely lovely. Mark is just one of those actors… you know, I kind of feel that most of us are just sort of craftsmen, really; we’re just kind of plying away and, you know, doing what we can, but Mark’s one of those guys that kind of elevates what we do to a real art form, and also is an incredibly nice guy and just a sweetheart to spend a few months with. So it was really brilliant because, you know, he’s like four or five years older than me, so when I was a young actor, you know, he was the sort of one that we all, or one of the ones that we would all look up to, so to actually get a chance to work with him was fantastic. And Steven was, again, you know, very very lovely; I think he’s aware of the fact that he is who he is, so he goes out of his way to make you feel comfortable because I think he’s aware that, you know, if we’re all starstruck by him, we’re not gonna be able to do our jobs. So he was, you know, very collaborative, more than happy to chat to you about whatever you needed to, about the work, and very encouraging and he was, you know, the most energetic guy on set, really. So it was great.”

And just about the set and that whole environment; can you talk a bit about the technology and how Steven blended live-action and motion capture? I know he worked really closely with you all.

“Yeah. So it was really the first time that live-action and motion capture and performances captures were blended really, to this extent and this seamlessly. So we were having to shoot everything on three scales, because the bad giants are all about 40 feet high, the BFG’s about 25 foot high and Sophie, the little girl, is the size of a little girl! So any of these scenes that we were all in together, we would have to shoot three times at three different scales. And so that was I think the first time that anything sort of that complex had been taken on, and so we were all aware that it was kind of a learning experience for everybody. So it took a little while; we had three or four weeks training before we actually started shooting, to get used to the suits and the environments and the way we were gonna work, and then it was just a matter of kind of feeling our way through it. But after a while, you know, you forgot that were wearing this ridiculous suit with a headcam looking back at you, and carrying battery packs and what have you, and, you know, it just became part of the work.”

You’re a really prolific voice actor. Do you work a lot with concept art, and with The BFG did you work with early renders of the giants to get into character?

“Yeah, exactly. So the three or four weeks at the beginning of the shoot gave the animators a chance to chat to us and, you know, share some ideas about thoughts they had, and then they came up with the rough renderings of what they were thinking about for the individual giants. And then because of, you know, this amazing technology, we could actually work in real-time with an image of our giant on a big screen as we were all trying to figure out the physicalities of these things. So, yeah, it was really about sort of blending of us bringing our skills and the animators bringing their ideas, Spielberg having an idea about what he wanted these guys to look at and then we sort of came to an understanding about how everything was going to work before we actually started shooting.”

Childchewer is obviously such an interesting character- more like a monster- to play, and the sort of language that the giants use-

Right! Did it really give you the opportunity to sort of ‘Child-chew’ the scenery?

“Uh, it did really, and I think those of us who ended up being cast realised that during the audition process we were the ones who kind of decided that, well, just go big or go home. So I think we created these larger than life characters in the audition, and I think that was what they were kind of attracted to as far as casting. So yeah, we really just got a chance to explore; we were given free rein to sort of explore vocally and physically as much as we wanted to, really. What ended up happening was a lot of the dialogue for the giants ended up being lost because I think it got a little bit too confusing with the BFG’s dialogue and, you know, this weird language. So most of what the giants end up with is fairly guttural and grunty and what have you. But a lot of the actual scripted scenes sort of phases back out a little bit. But yeah, that’s how it goes.”

I heard Robin Williams was up for the role of the BFG initially and that he really struggled with the language.

“Yeah. I think they’ve had the rights for a while, and I think, though, originally he was slated to. But, I mean, I don’t know. I do think that was quite a while ago; I don’t know how far down the road they got with that.”

So onto Ruby [Barnhill, who plays young orphan Sophie]. I think it’s really interesting that you have this new fresh face supported by such an experienced and seasoned team-  you have Mark, yourself, Steven, all these people – what was it like working with her? 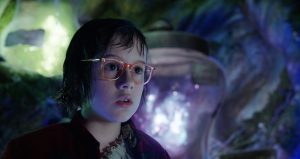 “Yeah, she was brilliant! And the amazing thing about her- and I mean it kind of comes with the innocence of youth in a way- is she was completely un-phased. And I mean if you’re that age you don’t necessarily, you know, you don’t bring all the baggage that somebody my age brings with you, you know, that kind of terror of working with Steven Spielberg and Mark Rylance and all that kind of stuff. You know, if you just go into it as a sort of genuine, enthusiastic, really talented young girl, you just go and have fun.

So it was really refreshing to have her energy on set because she was so great. I mean, she really took everything in her stride, and she’s got a fantastic family, and her dad, who’s an actor, actually ended up with a little role in the film as well – so he plays one of the footmen at Buckingham Palace- so it was a real family affair, so it was actually a real pleasure. Spielberg’s a really family-oriented guy, so he was very keen to get their whole family involved and make it a comfortable environment for her and then, you know, the knock on effect was that it became a comfortable environment for everybody.”

So were you at all conscious about how culturally important the source material was; did you feel like you had to do Roald Dahl justice?

“Absolutely. There was a sort of collective responsibility that we didn’t want to mess it up. But, you know, having said that, you couldn’t wish to be in a better team- you know, Steven Spielberg, Melissa Mathison who worked on E.T., was the screenwriter, who sadly passed away after we’d finished shooting, Janusz Kaminski who was the photographer; you know, you really felt like it was in very safe hands. But, absolutely, there was a sense of wanting to do that material justice. Absolutely.”

Was it interesting seeing Janusz and Steven adapt to the technology? I feel like it’s sort of his Avatar moment.

“I mean, it was interesting seeing all the head of departments, from the cinematography to the wardrobe; these are people who… he keeps a team around him that he’s worked with for a long time. A lot of these guys go back to even Raiders of the Lost Ark days. So there is a real comfort level and understanding between all these heads of department that was very evident. So there was never any sense of people, you know, feeling they have to showboat or show off, and there were people who were at the top of their profession who were, you know, they had enough money to do what they needed to do, and there was a real sense of everybody just getting their head down, just trying to make the best film they possibly could. I mean, some of the stuff we shot was done with regular live-action; we, all the giants, had little cameos within the film. But to see him move from sort of regular live-action to the motion-capture set-up was fairly seamless actually, he didn’t seem remotely phased by any of it. And also he’s a real character. he’s kind of a fun energy to have around. But yeah, he didn’t seem remotely… I mean he doesn’t seem phased by anything.”

There’s this sort of background burden with… obviously you have the animated film and the book that are so beloved. Were you thinking about the Cosgrove film at all when you were shooting? 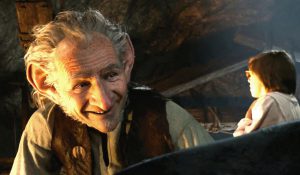 “Not a huge amount. I’d watched it. I have a ten year old daughter so I’d watched it with her before I even knew that I was going to do this. But I read the book again, obviously, before I did it. But you know I tried not to really… and because, you know, the giant’s pretty loosely… You know, you’ve got the Quentin Blake sketches for the book, but they’re fairly loosely drawn, so we were really given pretty free rein to kind of create what we wanted to create, so I tried not to clutter my mind too much with the other stuff, and just kind of approach the material as freshly as I could.”

You mentioned Melissa [Mathison, the screenwriter]. What was that like; coming out of the film after she passed away and you’d read these last words, these last scenes that she put together for you?

“Yeah, I mean, she didn’t know she was ill and we didn’t know she was ill during the shoot so we had no idea. So it was really terribly, terribly sad when I heard she’d passed away. Because she, perhaps more than anybody, spent more time with us because she was sort of… you know, we were trying to figure out how these giants were going to play in the context of the movie and she would, you know, write scenes, and we’d come back and suggest other stuff or improvising stuff. So she probably ended up spending more time with us than just about anyone else. We all became pretty tight so it was desperately sad that she died, I mean, only sort of five or six months after we finished shooting. But hopefully it’s a lovely tribute to her work.”

The BFG, directed by Steven Spielberg, is set to be released in UK cinemas on Friday 22nd July.