Read more
You are at:Home»Film»Review: Ghostbusters
By Sophie Trenear on July 12, 2016 Film
80%
80
Impressive

An outstanding reboot of the 1984 original, Paul Feig's Ghostbusters proves the trolls wrong with a new sharp and witty reimagining of New York City plagued with the threat of the world of ghosts. Although slightly disjointed in parts, the four leading ladies shine through and provide a fantastic two hours of unmistakable fun and energy which shapes it up to be just as good as the original.

Following the new trailer for the Ghostbusters reboot, released four months prior to the film’s release, many thoughtful intellectuals, most often fans of the original released back in 1984, flocked to the internet to share their pensive, well-articulated opinions with the world. “Bill Murray must be rolling in his grave”, says one user, still grieving the terrible loss of poor old Murray who makes a surprise cameo in the film.

Too many a time has confusion arisen when someone exclaims their dislike of something solely because of its predominating gender. But let’s brush off the casual misogyny for a second and look at the film for what it is. And coming out the other side, I can tell you with full, unashamed confidence that what it is is a real Ghostbusters film. It isn’t a radical reinvention of its source material, yet it refuses to lie as a simple remake either. It is an intriguing, different play on the same idea which then goes off in its own directions. Granted it relies heavily on a large portion of fan service for a route to easy laughs, but it feels as if it’s a treat for fans of the original. Spoiler alert, the appearance of Bill Murray and Dan Aykroyd as ‘disbelievers’ or ‘ghost debunkers’ proves to be an amusing, clever way of making the transition between old and new, and there’s no debunking the notion that nostalgia sells in Hollywood.

But Ghostbusters’s real strength derives from its cast, made up of the brilliant Saturday Night Live alumni Kristen Wiig, Melissa McCarthy, Kate McKinnon and Leslie Jones who form the four ‘busters. With an onscreen chemistry to rival that of The Avengers’ Tony Stark and Bruce Banner, Lethal Weapon’s Martin Riggs and Roger Murtaugh, Milo and Otis’ Milo and Otis, the four leading ladies are on top form the entire way through. Preferring to stay closer to the original’s character archetypes, however, they sometimes bleed into a disappointing state of tediousness. Only sometimes, though, and only very occasionally. Much of the time all four revel in their characters, with McKinnon being the absolute standout, stealing the show with every on screen appearance she has. And fortunately, she has a lot. 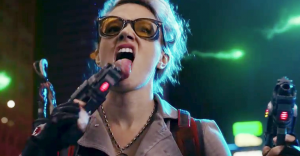 Her bonkers, off beat Jillian Holtzmann is the most refreshing character I’ve seen in a long time, and boy oh boy is she played well. And with an impressive, expertly choreographed fight sequence in the third act which she steals all to herself, she is definitely the most badass of characters the year so far. Having said that, it is that third act which poses a slight problem for the whole film though.

Director Feig is known for the brilliantly crafted Bridesmaids, the fabulously witted Spy and the reliably funny The Heat, all films relying predominantly on inter-character chemistry and humour. All of these aspects he uses expertly, all of which also show in Ghostbusters. What Feig is new to, however, is CGI and heavy action sequences. As it is his first special effects-laden enterprise, perhaps he can be forgiven for overshadowing the character chemistry. Everything was built up tremendously,  but with an overuse of CGI and visual effects in the finale of the film. There is a lot. Script and wit fall short in the final twenty minutes to make way for fight sequences and swirling green vortexes and massive, city gobbling, sky-scraper-sized plush toys- all of which I love, by the way. But I also loved the quick wit, the strength of chemistry, the tension which all seemed to get a little lost in those last twenty minutes or so. But the chaos that arises out of the mess is, unmistakably, organised commendably. 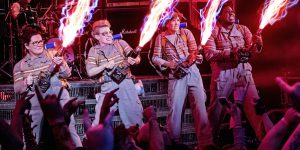 Where Ghostbusters really stands out though, is its few, quick nods to the trolls who may or may not be watching. Throughout the whole film, it becomes clear that no, this isn’t a ‘lady ghostbusters’ – it’s a film about ghostbusters which, by all means, still doesn’t ignore the fact that the ghostbusters are women. The fact that they are women never comes to define the group, but the way the world reacts to them has an effect. When the group are labelled as delusional fakers, in the ‘publicity stunt’ business by both a sceptical public and a secretive government, they aren’t just labelled as crazy people. They’re crazy women, with their gender made to be the cause of their delusions, and their delusions made worse by their gender. What strikes me about this Ghostbusters isn’t its visual effects (which was, for the most part, impressive), it’s quick wit, or even its lead actresses – though they all make a blow. It’s the way it reveals how the team, (male or female), have always had to prove themselves constantly not only to themselves and their peers, but their audience too.

Ghostbusters, directed by Paul Feig, is distributed by Sony Pictures Entertainment, certificate 12A.