In the second half of our interview with Florian Gallenberger, we discuss his cinematic influences and Colonia‘s historical themes in relation to recent political events.

Did you feel quite a lot of responsibility to make something that was worthy of their suffering in a way?

“Well, I mean, yes, yes I did, and, you know, so you said there were a couple of lukewarm reviews- I think there were people that said we didn’t… how you say…disrespecting the victims…I mean if someone says I don’t like the film; okay, so that happens, and everybody is entitled to not like the film as much as he wants to, but to say we disrespected the victims, that’s something that actually hurt me, or really, I got angry, because I think it’s just not true at all…and if you see the effect the film had now, that’s the effect the victims have been fighting for, for forty years, you know. Like, for forty years and nothing ever happened.

Now, the movie came out and all the things that they wanted, to look into the archives, for the minister to acknowledge what they went through, to arrest the people…this is happening now, and how can you say then, the film is not respecting… I think that’s very unfair, and I honestly have to say I have a strong feeling for things that are unfair now. But you can’t do anything so, as a filmmaker you’re pretty helpless against the critics, so what can you do”

“Yeah, it’s very frustrating, you feel like calling them up and saying like ‘Why are you saying this, it’s not true?!'”

You need to be in the bar in Birdman-shouting at the critics.

“I’m telling you, when the really hostile reviews that also were there came out, I had to think so much about the Birdman, because I thought this scene, it wouldn’t be there if someone else wouldn’t have had a somewhat equal experience… and you can’t do anything, only put a critic in your next movie who sits in the bar and who is like that so, you know…it kind of like calmed me down a bit thinking about the Birdman, yeah.”

Just talking about other films, I was wondering what your influences were, like directors, film-wise; I felt a lot of The Killing Fields in the beginning of the film, especially the scene in the stadium

“Well also the stadium scene, it’s a true scene… I mean not exactly happened, it’s not the same stadium because the original stadium has been renovated so- but…all the people who have been arrested during the coup were taken to the national stadium, were kept  there, and then this guy with the hood, I mean, I forgot his name now, he was a member of (Chilean President Salvador) Allende’s secret service and he changed over and he was going with the hood, and identified the supporters and many of them were shot in the stadium, others were taken to the secret torture camps.

…But I have to say- everybody’s different but- I’m actually rather trying not to see too many of the movies dealing with the same things because it’s sort of like “Oh my god they did it likes this” then you can either do it the same way or you can not do it like that. I think it just limits your liberties in how you approach things, you know, so, we tried to do it the way we could so, it’s not that we, we were trying to do it like this or just do it in another way than they did it.”

How you feel about the (EU) referendum from yesterday. How do you feel? I mean, I’m sorry we left you but I tried my best!

“Yeah, well, I think we are all sorry. I mean, it’s really strange because…people say “Well what’s the bigger message” and I think… what I would hope that people take from the movie is that you see what happens if people just follow one leader without thinking for themselves anymore, without asking critical questions, without…taking responsibility for their own decisions and just follow along…I mean, especially in Germany we have a lot of experience with the leaders and we have proven what sort of catastrophes it can bring along. Now if you look at the overall political situation, you see that in many, many countries there is again such a strong craving for leaders, you know, and…the funny thing is to me they are not so charismatic. I don’t think that anyone is a very charismatic, I mean to me. 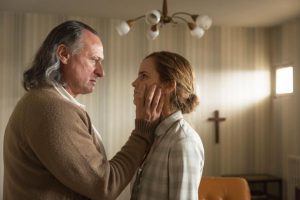 But that’s what I’m saying: Paul Schafer wouldn’t have been very charismatic to you, you know, ‘Who is this guy?’ you know, and that’s the same feeling that I have when I see Donald Trump; I think like “Who put up this joke?” but there are obviously big parts of society who…I don’t know what they see but I think that… what happens is that they have very simple answers to complex questions, and finally a simple answer is hardly going to be a real answer, but it’s simplifying the world and that’s making life easier for people and the burden of really thinking things through, of taking responsibility is taken away from them, and I think that’s an overall development…whether it’s Putin or the Hungarians or Slovakia …and the mind-set is always “We are better than the others, and that’s why we stay as a group together and we separate from everybody else”.

And… I think this is a very frightening tendency that you see now in so many countries, and if fifteen years ago you would have said that, everybody would have said “No no no, not at all, we are like coming together and we are working together and stuff” so, this feeling is gone, and now a different feeling of fear and of opposition and the other one and we are better and… I think that’s a very unfortunate development, and somehow the decision to leave the EU is- it’s not the same but it’s coming from the same source, I think. And of course, you know, others are going to be very happy about it, you know, all the separatist nationalist movements in all the countries are going to say “Well look, we can do it as well”.

And now coming back to the Colonia, to see what this small group of people did within…a bit of time, it’s forty years but, you know, they were very effective in what they did… unfortunately they were very effective. So, I think just at the bottom is a question as to whether you want to come together with other people and unite, which is always difficult but… which will bring, you know, new things, or whether you want to separate and be with the same people like, the same like you are, against the others… And of course like the colony was fenced in and the rest of the world was kept out because it could, this system could only function as a, like on an island”

I suppose you look at these issues quite consistently in your films, like John Rabe, again that’s like group mentality, psychology behind these awful things, these atrocities.

“Yeah, it’s funny because I think when you make a movie you are sometimes- it’s like you’re so inside the story that you have no- maybe not no but little awareness of the overall subjects that you are dealing with. So, like John Rabe is a real character so you’re like researching and you are like finding out everything about him and you are not looking at the subject like “Okay, this is again group mentality, one person following”… No, it’s more like, you know, you don’t have the distance-

And it’s also funny if you see one of your films from a couple of years ago, and to see how many things you couldn’t see because you were like so close within the story, and how different it looks like if you look at it from a distance, you know”

Yeah, I mean that’s another thing…within the colony, I mean you stopped being part of this world, and that was obviously also Schafer’s strategy, because they were promised to go to the sweet hereafter in a very special way, they were like God’s chosen community and stuff. And always that happiness is somewhere else, it’s never here, you know; I think that’s so you’re promised something that’s in the future or even in the afterlife…and it’s crazy how well this works, to promise something to people.

Read part one of Scott’s interview with Florian here.