We sent writer Scott to interview Academy-Award winning director Florian Gallenberger, ahead of the release of his latest film, Colonia. Here is the first part of their conversation, discussing the film and it’s critical reception.

The Edge: Was it difficult for you to have to mastermind and organise the more disturbing and upsetting scenes in the film – so the torture scenes and the beatings- and also, how did the actors respond to the material, and was it difficult to coach them through it?

Florian Gallanberger: “Well, you know, as there is so much reality to it, it’s not like you just invent it, you just start out by asking people who have been tortured there, so: how did it happen? How was the torture build-up? How would they behave? Would they shout at you? Would they be friendly?…I spoke to two survivors of the torture inside the Colonia Dignidad, and so what happened, or what’s shown in the film, is pretty much like small bits and pieces from their personal experience and what they went through.

…Because these are like normal German men who are not actors and suddenly they’re in these strange clothes and so that took quite a while and it took a lot of explaining to them how they did it and how they felt about it, and a lot of exercising and rehearsing and doing it again and again just to push them to what they finally did in the film.

…I know that Daniel for example, the moment that he is like all beaten up and tortured, I think actors like that, because… to see that, it’s a strong image, sort of like it shows how far they can go. Of course it’s partially makeup. If acting’s about to, you know, to show a different personality or to become someone else, then I think that’s something that they normally enjoy I’d say. I think it’s true that Michael Nyqvist sometimes did not enjoy what he was doing, I mean, that’s for sure, and I remember that when we shot the scene in the showers with the choir… you don’t see anything, but still, he said ‘I feel so creepy, and I feel so ugh’, so I know that for him it was not easy.”

I did notice that there was some contact, and it must’ve been difficult for him to be that close, to have to explain it to children

“Well of course… I mean that was a choir and they came with their parents, and so these kids knew each other because they have been singing in the choir for a long time and we tried to explain to them without traumatising them…as much as possible, as much as they needed to know.”

I noticed that with the toothbrush and the talking about the ‘stench’ of sin, it feels like a very physical, corporeal film, sort of like ugly and dirty and bloody; was that what you got from the tapes? Was that central to their ideology, to make people feel disgusting?

“Well, I think that his pattern was more to eliminate any kind of relation amongst people within the group, and what he did was he always split one member or a small group of members from the majority, and then the majority was humiliating the small group and…any day, it could be you who is the odd one and everybody is like pointing at you because he (Schafer) just makes up that you did something or you’re stupid or whatever.

So, he absolutely made sure that there were no friendships amongst the members. If three or more people were talking amongst each other, they had a very strange way of saying that you must not form any kind of groups, because he was like constantly afraid that some kind of a revolution would happen. So, I think his pattern was very much to isolate everybody, to not have any kind of friendships, relationships, and like this no one would ever be strong enough and no one would ever trust anybody else enough to really stand up against him and his system.”

I suppose that’s how Daniel and Lena manage to escape because they come in with that bond, and it maintains throughout what happens. 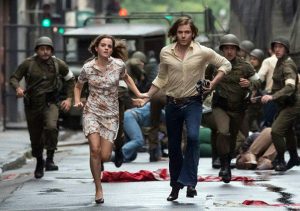 “Yes, yes, and that’s also if you listen to the tapes that I mentioned, it’s surprising because his pattern of manipulation is very obvious. So if you listen to that stuff you realise that for someone who comes from a normal society, who has kind of the normal way of criticising and of questioning another person and what he’s doing,

I think you wouldn’t have been fascinated by his performances, you just would have said “What the heck is this?” … but as he has for years been brainwashing these people, they reacted entirely different, and that’s why I think someone like Daniel and Lena in the movie, who come into this group of people, as adults who come from normal circumstances, they would have definitely not believed his crazy performances.”

‘Performance’, that was something that stuck out to me, that word in my mind. He’s a bit of a showman, in a way.

“Well, you know the one thing that I have been trying to figure out since I’m dealing with this subject is whether, or how much of, what he said he believed himself. And, of course if you ask the older members of the cult for them it’s clear that it is like this and he believed, he fully believed it… I think it’s a story of many contradictions. If you look with a healthy psyche it doesn’t make sense but, you know, psyches are not healthy and people are full of contradictions.”

Onto a more difficult question; there’s been some lukewarm response from critics-

“Lukewarm is a very mild way to put it”

I thought the meat of the film was fantastic. I think the last ten minutes,  felt like it lost its way, it went a bit Argo. Were the last ten minutes in the original script or was that something that came from studio pressure, because you talked about how you went looking for different funding?

“Well, that’s a hard question to answer because the writing process went on for such a long time because the research was so slow…there were several options for endings of the script, and we always wanted the two main characters to get out, you know, in a certain way, so that was important for them to get out.

I think we were more thinking about, is it too close with Argo, but you know, we wanted them to leave the country, because…in the second half of the seventies this subject was big in Germany because people…smuggled out pictures because…people who escaped, not the Lena and Daniel characters but real characters who escaped from there…and so we thought it was important for them to get out so you understand that this subject then made it into the public in Germany…It’s interesting, I think the last ten, fifteen minutes, well that’s the escape thriller, and the contained part within the colony is like… it has a different feel to it. I don’t know whether I’m to blame, or…”

“We wanted them to get out and I always wanted it to be a thriller, a thrilling movie, so not a lesson in history where you sit and you’re being told “Well this happened, and she learned” and so forth. I think to make a thrilling movie was always the target from the very first moment onwards and, you know, in Germany, and maybe in other places too, there’s a kind of a distinction: either a film is entertaining or a film has a serious subject and tells a serious message.

But I always think why can’t it be both, why can’t it be entertaining, and you’re there and you’re seeing a movie that really grabs you and you’re inside the movie, and in the end you understand, “Oh my god, this is a true story”, and somebody, through the means of entertainment, sold you something that otherwise, and let’s be honest, otherwise many people wouldn’t have cared about. Because if you ask someone… “do you want to see a film about Chile in the seventies and the German cult there”, and they’ll think “I’m not too interested actually”. So, I think to do it in an entertaining way was important to interest people for the story.”

It was obviously something that really means a lot to you.

“Well, you know, you get involved and you spend a lot of time with a subject and then it starts to mean something to you. Obviously, and you realise that the people, they truly have gone through this and you start to respect them for their strength that they had just to survive.”