A somewhat worn-out plot is the only real problem with this film, one that is otherwise fantastic, full to the brim with everything a summer blockbuster should be.

Funny, exciting, touching, cool as hell: The Nice Guys has got it all. It’s a film you can watch again and again, and each time be swept away for two hours of pure enjoyment – managing to hit that perfect balance of engaging plot, meaningful characters, and superbly well-done action, all while wringing genuine hilarity out of every scene. 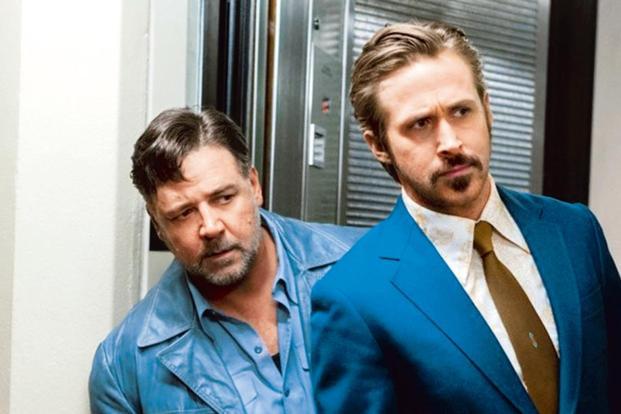 Best on screen relationship of the year. Hands down. (Image: Warner Bros.)

As the film’s three principle characters, and the only ones to receive any significant amount of screen time, March, Healy, and Holly must hold the film up for its duration – and they do, spectacularly. Special mention must be given to the young Angourie Rice, who manages to combine the bravado and fast-wit expected of her by the film’s noir-ish genre, whilst still retaining enough childish naïveté to be believable for the audience. She also holds her own with her two co-stars, even threatening to steal the scene from them in places. Speaking of the two lead actors, Gosling and Crowe are fantastic, meshing together with brilliant chemistry throughout the film. Although Crowe largely functions as the more serious of the two, advancing the plot and taking over the majority of the action sequences – leaving Gosling to essentially goof about for most of the film and hold up the comedic side – the two play-off of each other as well, setting-up jokes and making hilarious back-and-forth quips whenever they can.

Director Shane Black (Kiss Kiss Bang Bang, Iron Man 3) creates a brilliant tone for the film, combining the familiar, effortlessly cool 70s detective setting with sharp, modern comedy, dripping with ad libs (courtesy of Gosling and Crowe), absurdism (including a bizarre dream-sequence involving a talking bumblebee), and moments that undercut the audience’s expectations to brilliant effect – as well as managing to pull humour from the most surprising of places. The action is well-done – delivering boosts of excitement whenever the comedy has gone on for too long; the script is tight, managing to fit in moments of genuinely touching backstory and character development without feeling like the film is hitting you over the head with its studio required dose of emotional vulnerability. The plot however is probably the weakest part of the film – even though for the most part it moves along at a quick pace. There are moments in the middle where characters are introduced too late, and storylines branch off or finish in something of a muddle, and the whole thing is hardly the most original of stories.

The film is never really held back by these problems, though. The fact that the plot is familiar to us doesn’t matter, because, really, the plot doesn’t matter. Not here. What matters is the characters, the action, the comedy, and the overall feel of the film, and all of those things are more or less perfect. Though it’s still early days, The Nice Guys has made a bold claim to be the best summer film this year, and for such a fun, funny movie, it’s definitely one that will stick around, and be enjoyed for a long while to come.

The Nice Guys, directed by Shane Black, is distributed in the UK by Warner Bros. Pictures. Certificate 15.