Read more
You are at:Home»Film»In Defence of The Hateful Eight
By David Mitchell-Baker on February 17, 2016 Film

The eighth cinematic outing from Quentin Tarantino (depending on whether or not you deem Kill Bill to be two separate films or one 4 hour epic), The Hateful Eight is a throwback to the spaghetti westerns of old. It’s ambitious in scope, rich with social and historical context, brimming with intriguing characters and laced with classic Tarantino directorial trademarks.

So why hasn’t it been the hit that everyone was expecting it to be? 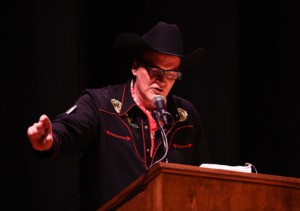 For a while it seemed that Tarantino wasn’t every going to make The Hateful Eight, after an online script leak in January 2014, he decided to scrap the project and instead make it into a novel. However after a successful live script reading featuring numerous stars who would go on to appear in the film, Tarantino then confirmed at San Diego Comic-Con in 2014 that the film was back on track and would be released in 2015, featuring an altered script to the one which had previously leaked.

The film seemed to come and go rather quickly. Having performed below expectations financially across the pond in North America, the film arrived on British shores and failed to make much of an impact; reviews were solid, but the film garnered nowhere near as big an audience as initially projected.
Following on from Inglourious Basterds and Django Unchained (QT’s most critically well received films since Reservoir Dogs and Pulp Fiction, and the two highest grossing films of his career) The Hateful Eight was never going to have any easy journey to success. Perhaps most telling is that film has managed only three Academy Award nominations; Best Cinematography for Robert Richardson, Best Original Score for Ennio Morricone and Best Supporting Actress for Jennifer Jason Leigh. This is half the number of nominations received by Basterds and Django.

Let me be clear, this is by no means whatsoever a bad film. Far from it. However it is a terribly misunderstood and under appreciated film, and here’s why. 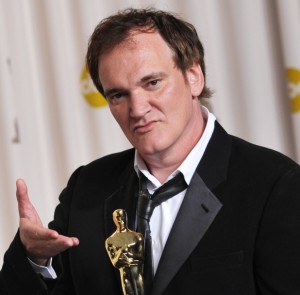 Tarantino and his Academy Award for best original screenplay in 2012 for Django Unchained.

First off, the script. This is usually Tarantino’s strong point and the area in which his talents really shine. His scripts have thus far earned him three Academy Award nominations and two wins, all in the Original Screenplay category, the man’s concepts are always unique, entertaining and fresh, the dialogue is gripping, exciting, ballsy and fun. The Hateful Eight is no different in this regard.

The film plays out as a sort of ‘whodunit’ story involving eight very different individuals, all of whom are trapped together by a fierce blizzard in the middle of Wyoming’s winter. Tarantino is incredibly ambitious with the film as around 80% of the events take place within Minnie’s Haberdashery, the stagecoach lodge in which the titular eight find themselves confined to, and this means that the dialogue is essential to the sheer entertainment and interest we invest into the film. There is never a dull moment with QT’s script, numerous topics are explored within the screenplay with the critique and observation made of the film’s context in particular being both fascinating as a piece of cinema and as a history lesson of sorts. This is also key to the character development of the film, both Samuel L. Jackson and Bruce Dern’s characters benefiting immensely from this, but more on them later.
To keep a near 3 hour film as entertaining as The Hateful Eight proves to be is an achievement not to be sniffed at and Tarantino deserves significant praise for his screenplay. 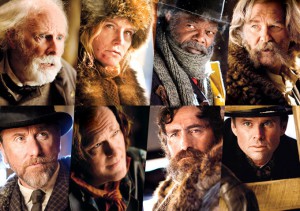 The Hateful Eight is, as established by the title, an ensemble piece. For these eight characters, Tarantino calls upon several of his regular collaborators as well as some slightly different faces.
Jennifer Jason Leigh, Kurt Russell, Michael Madsen, Tim Roth, Bruce Dern and Demian Bichir are all excellent in the film. Some are served with more to do than others (Bichir and Madsen are hard done by) but each play an essential part in the film.

Walton Goggins is one of the film’s two central figures, and he almost steals the whole damn show. Goggins showcases tremendous range in the film; he plays bumbling, outraged, humorous, courageous and honourable, all without breaking a sweat, a fantastic performance.

However if a case can be made that Goggins almost steals the whole damn show, then it’s fair to say that Samuel L. Jackson absolutely does. This is Jackson at his absolute best; he can be dark and intimidating one minute then relaxed and friendly the next, his overall delivery is spot on, he brings gravitas and charisma to a fascinating character and even his movements and looks are portrayed to perfection. Honestly this is the best we have seen Jackson since Pulp Fiction, he really is that good in this film; how the Academy failed to recognise his incredible performance with a Best Supporting Actor nomination is beyond me.

As attributed by the numerous awards recognition, Ennio Morricone’s score is fantastic and deserves all the praise possible. What else would you expect from the man who brought us the scores of films such as The Thing, Cinema Paradiso and, of course, The Good, the Bad and the Ugly? He creates an atmosphere like no other which perfectly fits to the film.

Many have criticised The Hateful Eight for being a vanity project of sorts for Tarantino (his favourite actors, a showcase for his writing abilities, a way of showing off his fanboy nature for westerns and Morricone) but also stating that the film is only there to fulfil his insatiable obsession with violence, gore and pain. And of course there’s the “I couldn’t relate to any of the characters” or “the characters weren’t likeable” complaint *sigh*. To say this is to undermine everything that Tarantino is trying to achieve and goes completely against the point of the film. 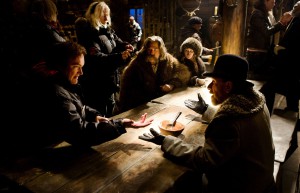 These are seasoned veterans who Tarantino has largely worked with before, why wouldn’t he want them in this film? The Hateful Eight has become a passion project of sorts for the man, the 21st century western film that could, and he wants the absolute best outcome and the right men and women for the jobs, his casting is spot on, everyone brings their A-game to the show. Plus who wouldn’t want Morricone to score their film? The man is a certifiable legend in his field and clearly still knows how to do his job, Morricone’s name belongs up there with the John Williams’ of this world.
Tarantino is the auteur supreme of modern cinema; he writes, he directs, he produces, he cameos, the man arguably hasn’t made a bad film yet and he is a marketable brand in his own right. The Hateful Eight has every right to be a showcase for his abilities as not only a screenwriter but as a real actor’s director, the man is a fan of the movies and in his tribute to the western movies of old (shot in 70mm and all), he succeeds immensely. 2015 saw a slew of western movies be released and The Hateful Eight sits above them all as the best (yes, even better than The Revenant).

The violence of the film can understandably be seen as jarring to some, it arrives thick and fast when the first bullet is fired and the first blood is drawn. But this is the old west, this is an uneasy period in history after the Civil War and these are despicable and nefarious characters stuck together, of course blood is gonna be spilled! Tarantino isn’t making movies for everyone, he is an acquired taste, no doubt about it.

If you were to make a film called The Hateful Eight then it’s gonna feature bad people. They’re hateful… hateful means bad, nasty, unpleasant. We’re not meant to sympathise with or like these characters, there’s no place for heroes in Tarantino’s old west.

The film’s not perfect (it’s a little too long, some scenes don’t quite work as well as they should) however it is clear that The Hateful Eight has become a victim of its own intentions, The film is an excellent addition to Tarantino’s stellar filmography, even if it must be criticised and put down before people eventually and inevitably appreciate it’s true greatness.

The Hateful Eight (2015), directed by Quentin Tarantino, is released in the UK by Entertainment Film Distributors. Certificate 18.