Read more
You are at:Home»Features»Interviews»‘With animation the scene can take a life of its own’: An interview with directors of the Oscar nominated Anomalisa
By Jack Gracie on March 29, 2016 Interviews

Charlie Kaufman and Duke Johnson are the directors of 2015’s Anomalisa; based on a play of the same name, it is a masterfully created stop motion picture in which a lonely help author Michael (voiced by actor David Thewlis) sees everyone the same until he meets a certain special woman, Lisa (voiced by Jennifer Jason Leigh), in a hotel. Distinctive and thought provoking it received critical acclaim, with a 92% approval rating and critics praising it among the highlights of Kaufman’s filmography. Receiving nominations and wins at the Oscars, Golden Globes and the Annie Awards, it became the first animated film to win the Grand Jury prize at the Venice International Film Festival.

Representing The Edge, Head of Design Jack Gracie got to sit down and talk about the making of such a masterpiece.

You said that your producer was specifically looking to make a stop-motion film before finding the script; was there any moment after choosing Anomalisa that you considered another medium?

DJ: It was never not stop-motion. We approached Charlie with the idea of doing a stop-motion movie as that’s what we do. Me, Dino [Executive Producer], and Rosa [Producer] we’re stop-motion people. Obviously the story could be told in any medium of animation, but it would have been something and this is what it is. The stop-motion brings a dream like quality and we like the aspect of being able to quite literally feel the impact of the animator manipulating these real three dimension objects that exist in the real world.

Yeah, you said in the Q&A about how it gives the actors the sense of being controlled.

CK: And it’s more like live action than any other form of animation, as it takes place in literal space, with literal figures and sets. Nothing is drawn – it’s there and you light it.

In another interview you said that because of this the animators became actors in a way, adding their own actions within the film. I was just wondering if this lead to a favourite quirk included by an animator?

CK: The one that comes to mind is the one where Lisa is about to sing, and she covers her face with her hands because she’s embarrassed, you know. She says, “don’t laugh at me,” before uncovering again and that was added by the animator. I think it had to do with the fact that there were no eyelids available at the time for her, but I think it’s a beautiful moment. I don’t know who the animator was actually?

Rosa, working in the background: Adam Fisher. The Red Snapper.

DJ: We call him Red Snapper, as that’s his bowling title when we went as a studio.

CK: Do you remember any…ugh…

DJ: Oh, any moments? I thought you were going to say great bowling names and I was panicking. Shit, ergh… other little moments…

Rosa: What about the eyes? At the podium?

DJ: The funny thing about that was that I hated it, and Charlie saw it and loved it.

DJ: Michael rubs his eye during the presentation at the end, and when he rubs his eye if you like pause it on one frame one eye is looking this way and the other eyes looking another before it kind of snaps back into place. For that one frame though he just looks like bleeghh, all cross eyed!

CK: If you rub your life in real life it does just that, and he animated it beautifully. 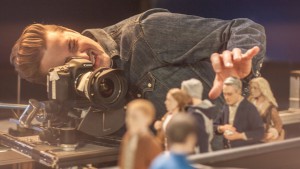 There also seemed to be a lot of long tracking shots which you really don’t see in stop-motion, and I was wondering if they were harder to make? Were you really going from set to set or stitching together in post?

DJ: It was extraordinarily difficult.

DJ: Going into the lobby, into the elevator, up the elevator, down the hallway, into the hotel was very complicated to do. But with stop-motion it’s just as hard doing a slow push in on a scene as well because its many many thousands of frames of a camera moving a fraction of a millimetre and them animating alongside it. Because although you’re animating in 3D you always have to be aware that you’re producing a 2D image so you can cheat a lot, but with perspective its always changing and adds so much more to the complexity.

DJ: Yeah, that one especially with the pan. So with animation a lot of times the scene can take a life of its own, so the action sometimes goes faster or slower, but with these shots where the camera movement has to be perfectly planned and measured, the character has to sync up perfectly with the camera and that changing perspective. Extraordinarily hard for the animators.

And so were the storyboards especially detailed due to this as well as your low budget? More than a live action film?

CK: I think we did the amount that its generally done. There was defiantly the concern about money, and at that point we had zero money as it was before the Kickstarter we got going.

Were there any aspects that you changed, in order to maybe make it sell more and make back its budget?

CK: We didn’t want to change anything. We didn’t make any concessions when it came to the ratings, we wanted an R and we got one.

DJ: We didn’t censor ourselves at all, but at the same time we weren’t trying to make anything like the sex scene more gratuitous than it is. We just wanted an accurate portrayal. We’re glad it isn’t an NC-17 though! 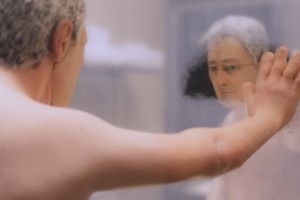 It was funny sat in the cinema when it came to the shower scene I mentioned, and when Michael first steps out the shower facing the camera and you hear the audience collectively go ‘oh’!

One thing I wanted to ask about was about the credits as there’s a sound effect where its multiple overlapping voices, almost like a second audience. Were all these lines written also?

CK: No. That was all done with Tom in post-production. So we went into the studio and I was in the booth having a conversation with him, he could hear me through the headphones and we were recording the responses. We just did a lot of that, and Tom just talked, then the editor pieced everything together into this sort of massive cacophony.

Were there any other audio tricks used in the film?

CK: We did the voice recording over black at the beginning, as a tip of the hat to the film’s theatre origins, but I don’t think…

DJ: There is one, actually! The original play had a foley artist live on stage to make all the sounds and we ended up using the same foley artist. They also did something fairly unique which is that they went to real locations to record some of the foley as opposed to a stage to get completely clean sound. So they went to actual hallways and hotel rooms.

CK: We wanted the sound to be dirty, like this place actually existed as opposed to the sanitized animation environment.

I was thinking while watching that I’ve never heard characters breathing so much in an animated film.

CK: That was something we paid a lot of attention to. We animated all the breathing, every odd mouth noise the actors made. Those are always cut out in typical animation so leaving them in is fun.

Keeping with the audio theme there are lots of little songs dotted throughout the film, were there were different choices at any point?

CK: Originally the song Lisa sings was ‘My Heart Will Go On’ in the play, but we couldn’t get the rights to that so we had to find something else, but that lead us to something better we all think. Everything else was the same in terms of music, except for the song that Tom sings which we created for the film. The Japanese folk song was also sung by Jennifer so that’s interesting. 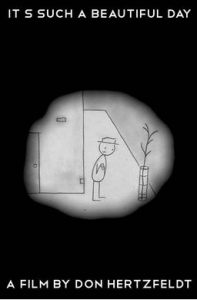 CK: Yeah its definitely a struggle for creators to try and free themselves from the industry. It’s very expensive to make movies as well as very difficult, especially if they’re eccentric. I mean he does all his work himself so I guess that makes it cheaper.

DJ: The thing about Don’s stuff is that it feels very consumable to me. I dunno. It’s very funny, its entertaining… Its not like it’s a difficult film to watch or anything. I guess what I’m trying to say is, along with our film, I think if a wide audience went to see it, like if you could force them all to watch it, I think they’d genuinely enjoy it – but theres sorta this stigma.

CK: Or if they could get over the idea of what animation is ‘supposed’ to look like. I mean its not really Disney.

And I suppose in this area of the world animation is definitely marketed as something just for children.

CK: And very polished too. Which is especially not true for Don’s work, which is what gives it it’s energy really!