Read more
You are at:Home»Features»Interviews»“If you act like an arsehole, your mum is going to be angry with you”: An interview with Will Varley
By Camilla Cassidy on February 19, 2016 Interviews

Will Varley is the kind of singer-songwriter who pens then effortlessly croons beautiful, weighty and introspective songs about the sorry state of the country or magical, otherworldly fairytales – before subsequently jumping into a foot-stomping jig about the self-checkout machines in Tesco or cat videos on Youtube. He is a true folk singer, who draws on both the big and the small to great organic, accessible music you can connect with in countless different ways.

Celebrating the release of his third album, in the middle of his biggest tour to date, and fresh from recent tours with The Proclaimers and friend Frank Turner, Features Editor Camilla got the chance to chat to him about everything from Southampton’s gig scene, to his 2013 song ‘I Got This Email”s ability to predict David Cameron’s mum’s political leanings.

How are you enjoying your tour, if you’re all busy rehearsing?

Yeah, good! I’ve got two or three days off between legs, so we just did Newcastle, Edinburgh, Glasgow and Manchester.

How are the crowds up North?

Amazing! I mean, Glasgow was pretty rowdy, pretty drunk and rowdy, but all good fun, and we sold out a couple of the shows. So, yeah, definitely amazing.

A lot of people first heard of you when you did your Rambling Tour, but that was all along the South coast; did you have a favourite spot down here?

Favourite place in the South is tough; I mean, I’m biased because I’m from Deal and I do love it here. But there’s lots of great places along that run. Southampton has, in terms of live music, a kind of culture for going crazy for gigs. I dunno why that is! But yeah, I had a great time in Falmouth, had a great time in Cornwall in general, really. All over the place, I love it all. 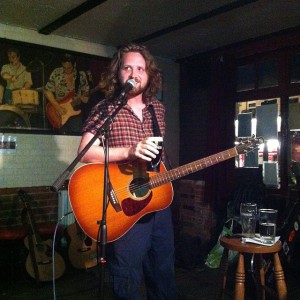 Where are you based?

Oh, we’re in Southampton! Haha, it’s nice to know you weren’t just saying that! I hope we give you a good reception when you come back! I actually saw you when you played The Bent Brief, on your Rambling Tour –

Yes! That was a great night! And that girl who threw up on the stage!

I… I think she must have been looking for the loo, but I don’t know how she managed to get it that wrong!

Yeah, that was insane!

Is there anywhere coming up you’re particularly looking forward to going?

On this next leg? Well, a few years ago I’d do a big tour and play lots of different places, some of the venues being nice and some of the venues being… not so nice. But on this run, every single show looks great on paper. So, everywhere? I know that’s a really boring answer! Obviously I’m really looking forward to London and the Skala gig, which is my biggest headline gig I’ve ever done. Really looking forward to that one, we’ve sold hundreds and hundreds of tickets.

When you toured with The Proclaimers last year, a lot of their music is, even if not political, at least opinionated in some way. Did that work well with your style?

Yeah I think it did; we got on really well, I got on with the band and the crew a lot. They’re just great guys. For them it’s about words and lyrics. And for me it’s kind of the same, so we had that similarity. Obviously there were a lot of differences in what we do, but I think in common we had just a love of words, and using words for stories. It worked quite well, I think.

Aside from the words themselves, would you say you have any particular musical influences? You’ve been associated a lot with Frank Turner, and Beans On Toast, but particularly in your last album you’ve got a really diverse sound.

It’s a hard one. You never really know what’s influencing you, you know what I mean? You can never really pin it down. Obviously there’s the great singer-songwriters of the 60s and 70s, you know, Neil Young, Dylan, that sort of thing. I think you’d be lying if you’re a singer-songwriter and some of those greats haven’t had some influence on you.

But I think there’s a lot to be said for the experiences that you have, and the conversations that you have. I think that’s the big influence for me. Like, overhearing people talking, always just keeping your eyes peeled for things. And other musicians, that you meet and actually play gigs with, I think are often underrated as influences. I don’t know if that was the answer you wanted?

No, definitely! That’s made me really happy; the one that struck me was ‘As For My Soul’, which sounded kind of Tom Waits-y .

Yeah, yeah! I love a bit of Tom Waits.

It’s wonderful that there’s a mix of classical, and sort of, everyday influences. A lot of your music is quite quintessentially British, in that way, so how do you think it’s going to work when you go to the States?

Haha, yeah, that’ll be interesting! I’ve never played in America before, this tour will be the first time. The first real tour I did outside of the UK was Germany, not that long ago and it was kind of [laughs]funny ‘cause a lot of it works. But then there’ll be, occasionally, a line that goes completely over everyone’s heads.

Like, I didn’t realise they don’t have Tesco in Germany? So the line about Tesco in ‘Weddings and Wars’ just… dies. Completely. They just look at you like, what are you talking about? And like, Little Bo Peep, they don’t have that story – little references like that, that in England you just throw away and that it goes without saying that everyone’s going to get. It got to the point where I was like, stopping to explain the joke before I told it, and you know you’re in trouble when that’s happening!

I guess I have to ask, relatedly; how did you feel about hearing that David Cameron’s mum signed the petition about Conservative cuts?

Yeah, amazing! Someone emailed me that day asking what the lottery numbers would be next week. I dunno, to me it’s kind of obvious – if you act like an arsehole, then your mum’s going to get angry with you!

It doesn’t matter if you’re the Prime Minister –

– or just a regular person, it’s a given!

Will Varley is playing The Joiners on March 4th, and other venues across the UK throughout 2016. Postcards From Ursa Minor is available now.