Crafted with madness, the immersive sim theme park that Arkane has been attempting for years has finally arrived... and it's wonderful!

When I first played Dishonored and Dishonored 2 I ensured that I played them entirely non-lethally. I often found that this was sometimes difficult and, having not had any prior experience with stealth games before, whenever I got caught I found myself accepting my fate, I would die so as not to kill them.

This was clearly not how the games were meant to be played, Corvo and Emily, the protagonists of these entries, easily have an arsenal powerful enough to handle these situations, and I was always aware of that. It felt jarring every time I had to stop and take the hits, sometimes lasting up to six or seven seconds, simply for that nonlethal run.

So, why then, did I always stick to the nonlethal code, given that it was evidently ruining my experience? The obvious choice to blame here is the morality system, as if you were to kill too many other characters then you get a morally bad ending. While it is likely that in my childish naivety I believed that killing one or two would cause this, I feel that there was more to it than that.

When we look deep at the setting of Dishonored we can see that Dunwall is a very grim place to live, with rats infesting the sewers and dark twisted magic infecting the minds of those not wealthy enough to merely live. Being in Dunwall, or Karnaca in the second game, makes you feel melancholy and sadness, and looking at the downtrodden faces of those cursed with living here makes you feel sick and sorry for them. There is a world where that is broken and both Corvo and Emily, members of royalty, are forced to see every facet of it. It makes the player feel uncomfortable but it would surely make these two feel worse. I believe this is the true reason I went for a nonlethal run as I could not force these characters to commit acts that it wouldn’t make sense for them to do. This is a huge shame as the tools that both characters have for killing really are great fun, but playing with them seems to come at the expense of a truly authentic story, for me at least. 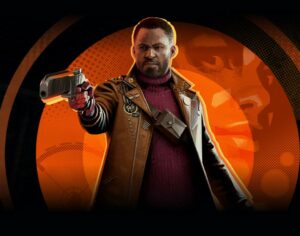 Enter Deathloop, the never-ending party. Deathloop is set in a single day that repeats endlessly, a theme that is becoming uncomfortably common in all my favourite games of late. The premise is to kill eight people in a day, and you need to work out the puzzle of how to do this. While mechanically it plays very similar to Dishonored, you still have a blink ability while also stealth is always an option, it feels far more fun to play. The biggest contributor to this is the setting and the fact that if you kill someone they will be back again tomorrow. The game is sure to communicate this to you, through writing appearing on a wall stating “kill them all”, as if Arkane Studios are shouting at you to just play, to experiment with all of your abilities in this playground they’ve made for you, to do what you’ve always wanted. This is shown most clearly when a character chooses to jump off a cliff and two others discuss it, stating that “he knows how to party”. These people are killing themselves for the kicks, in the knowledge they can do it all again tomorrow, so what does it matter if you take them out with that new skill you just learnt?

I find it interesting how such a change to the setting of a game can elicit such different emotions and playstyles. While there are other changes to make the game more elegant and fast-paced (which I will discuss later) this feels like the most important. The world of Blackreef quite literally is a never-ending party, with vibrant streets and a cast of characters that are only here to have fun. I found myself always smiling in the morning to Aleksis broadcasting the words “I would like to personally welcome you to the first day of your new forever”, and once again getting the same energy in the evening for Frank’s fireworks that “are like you: breathtaking”. Everybody in Blackreef wants to be there, even Colt, the protagonist who wants to break the loop, enjoys it.

Arkane Studios are my favourite game studio, so whenever they announce a new game I get excited, even if it’s years in advance. They are one of the few studios still making games in the immersive sim genre, inspired by games like Deus Ex and System Shock. The primary feature of these games is being able to have many routes to one objective, you may go along the rooftops, in the sewers, a side alley or simply straight through the middle with a fight. With each scenario, there is often at least two or three ways to go about achieving your objective. Eventually, more routes are clear to you the more familiar you become with the game, for example, Prey’s GLOO Cannon can get you into all sorts of areas once you work it out, so they tend to become more enjoyable on second or third playthroughs. However, this is also a huge drawback of those games as not everyone wants to do multiple playthroughs to experience everything it has to offer. This is the second area where Deathloop shines for it only has four areas to explore, which change depending on the time of day. You rapidly become familiar with the layout of the levels so soon start to experiment with other, less-conventional routes. I can only applaud Arkane for working out a way in which the players can experience the beauty of an entire level of theirs without needing to redo it all, with all of its objectives. Colt only needs to get it right once so the rest of the time you, and him, are simply learning about the loop. So the game itself oozes with possibility accompanied with questions of “what if you go this way..? What do you really have to lose that you can’t get again tomorrow?”

It is worth mentioning that there are other tweaks that cause the game to flow well, for example, the fact that power, which is used for your abilities, immediately regenerates and there is always a large abundance of ammo or health items. The player will rarely worry about if they are equipped enough for a situation, which for these games is a freeing experience. Deathloop even does a great job here at modernising the adventure game genre as piecing together the final level that you need to set up, along with other smaller puzzles in this time-loop, gave me flashbacks of Day of the Tentacle’s time-based puzzles. Also evidently it is somewhat of a roguelite, given that if you die you start the day again, but the game is very forgiving here where the key to winning is preparation in knowledge, not skills or equipment. Thus this makes the game more accessible to all players, though you can make it more of a challenge by fighting each boss enemy on their own terms.

To finish I would like to say that I feel this is the perfect game for all of our post-lockdown blues. For a very long time, all of us have been living the same day over and over again, a seemingly never-ending loop. As a huge player of games since I was very young, I will always advocate the fact that they are an incredible resource for exploring ourselves. Deathloop provides a safe way for you to go back to a loop that is seemingly never-ending, to explore how it makes you feel but also knows that you have control. Treat it as your playground, let your rage out here, experiment and have some fun. Break the rules of this world and eventually break the loop, I promise you will feel better for it.

Deathloop is out now on PlayStation 5 & PC. You can watch the launch trailer below.