After the *slightly* disappointing release of Chemtrails Over The Country Club in March, Lana Del Rey has left us gasping for some more sad girl hours!

Del Rey has made a name for herself since Born to Die as the glamorous but melancholic singer of huge hits such as ‘Video Games’ and ‘Ultraviolence’, and although she’s changed aesthetics throughout her career, this age of Lana feels far from what we’re used to. Of course we cannot expect artists to stay the same over their tenure, but it feels like we’ve swapped the excitement of fame and fortune in Hollywood for sitting in a cosy cabin in New England. Now this isn’t necessarily a bad thing, but what drew so many of us to Lana’s music was a shared feeling of being young, wild, and free! 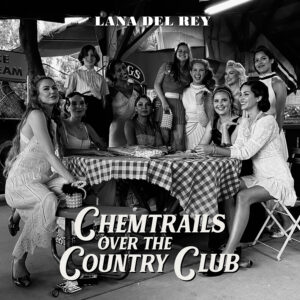 Chemtrails Over The Country Club (2021). Via Polydor / Interscope.

Despite the left turn in sound, Chemtrails received mostly positive reviews. The songwriting was strong, but personally, I felt it missed the mark. The songs weren’t catchy or memorable, even after multiple listens (Well apart from ‘White Dress’, but we don’t talk about that one), and each song just blurred into the next, and I subsequently fell into the five stages of grief for my all time favourite artist. That was until May…

Earlier this year Lana blessed us with the release of three songs set for her eighth studio album, Blue Banisters, and actually they’re not too bad (or maybe I’m just going through the denial stage). They’re definitely growers, and I think they’ll separate the true fans from the casual listeners, but they’re exactly how we like Lana; sad, pensive, and poetic.

First we have the title track, ‘Blue Banisters’, a song which I think perfectly encompasses Del Rey’s mourning over a breakup and growing older, making this one of her most vulnerable tracks yet. There are references to Lana’s old style in the lyrics, mentioning Russian poetry, her sister Chuck who’s massively influenced her music, and her “legacy” which puts a strain on relationships. In terms of sound, the song is quite repetitive and simple, but the skilful songwriting leaves this track far from boring. Another thing I love about the song is Lana’s mentioning of her “sisters”, who take focus as they support her through her heartache. In the infamous ‘Question for the Culture’ post of last May, Lana addressed the criticism she had received for “glamorising abuse”, which unfortunately translated into a bashing of feminism and black female musicians. The past few years Lana’s behaviour in the media has been disappointing, and has honestly made many fans like me question our love for her, but hopefully her newfound appreciation for female friendships is calming that erratic storm within her.

Accompanying the release of ‘Blue Banisters’ was ‘Wildflower Wildfire’ and ‘Textbook’. ‘Wildflower Wildfire’ adopts a similar sound to ‘Blue Banisters’, which relies on a soft piano melody, but this means it is overshadowed by the latter. It is still a good song, and the soothing melody feels as though you’re laying in ‘the bed of wildflowers’ Lana mentions she’s made for us. 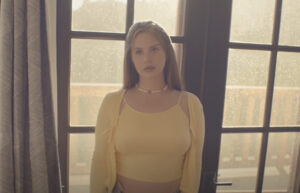 Lana performing in the ‘Arcadia’ music video. Via Youtube.

‘Textbook’ sticks to the same folk sound, but differs in it’s melody, almost feeling slightly jazzy. Lana sings about how she looks for a father figure in her relationships, sticking to the daddy issues trope that made her famous, but this time, the atmosphere feels more introspective and contemplative. Blue Banisters seems to be an album filled with self-discovery of oneself and the changing world around us, and I’m so here for this!

Blue Banisters was originally set for an early July release date, but was pushed back to October after a classically nonchalant Lana tweet telling us a single will be out “soon-ish”. She did however post the artwork for the album cover, which shows a brooding Lana sitting with her dogs, Tex and Mex, in front of a row of brown (?!?) banisters.

The aforementioned single turned out to be ‘Arcadia’, released last month. The lyrics adopt a well loved poetic feature, combining the conceit of her body being a map of LA with her own soul searching, trying to find ‘the lost little girl’ within herself. Set against the backdrop of strings and a muted horn is the foundation instrument of Blue Banisters, a simple few notes on the old piano. Arcadia left me feeling nostalgic and peaceful, and is a real stand out on the album for me!

I’m feeling positive about Blue Banisters. Although it won’t be for everyone, I think the critics will love the poetic alliance Lana draws between herself and the current political situation of the world. And although I’m always longing for some more Born to Die era songs, I’m starting to come to terms with the evolution of Lana Del Rey into a softer, more mature woman. I’m just hoping not every song is based around the piano!

Blue Banisters will be released on October 22nd via Interscope / Polydor. Check out ‘Arcadia’ now down below.