Once Hollywood’s most popular genre, the Western has influenced and trailblazed in cinema like few others. But the once monolithic behemoth of cinema is, in the eyes of many, dead. Gone are the big budget days of A-listers hunting down outlaws, springing daring rescues and protecting their land from the greedy rich man. Now, we are reduced to smaller, more intimate independent features, lacking the star power and budgeted at a small percentage of the heydays. However with the return of HBO’s Westworld for its second season, the old dog may just have some life in it yet… 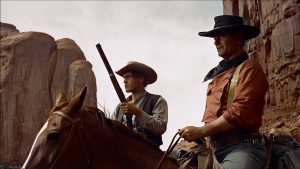 In its prime, the Western was the man in Hollywood. After legendary director John Ford’s seminal Stagecoach in 1939, which saw the iconic duo of Ford and Western star John Wayne start their famous run, the Western became a tour de force, delivering the likes of Shane, High Noon and The Wild Bunch into the 1960s. The most notable picture remains the 1956 Ford-Wayne team up The Searchers, commonly regarded as the greatest Western of all time, one of the great American films of the 20th century and one of the most influential films ever made. Directors like Martin Scorsese, Steven Spielberg and George Lucas have taken direct influence from Ford’s masterpiece and paid homage to the film both visually and story-wise.

Whilst Ford and Wayne were busy dominating the genre, another significant player came into the game as the Spaghetti Western began to rise from Italy, bringing with it Sergio Leone. Best known for his Dollars trilogy, Leone strung together a legendary streak of Westerns, like Ford, delivering arguably the other most significant entries into the genre in the epic The Good, the Bad and the Ugly and Once Upon a Time in the West; the meticulous craft and undeniable style put into these films created utterly badass movies which still stand the test of time.

But the 1990s brought perhaps the most important moment in the history of the Western in the form of 1992’s Unforgiven. With longtime Western star Clint Eastwood directing and starring, the film essentially retired the genre, providing an existential take on the conventions, whilst offering us a lead character in the vein of the typical Western heroes, but in a later stage of life, bruised and battered by the assassin lifestyle and riding out for one last job. Eastwood declared it his last Western; thus one of the genre’s icons retired in a blaze of glory, delivering a classic in the process. 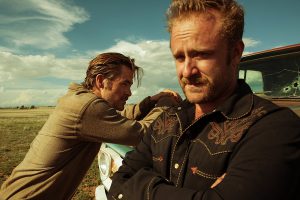 But there has been something of a resurgence of late. The Western is starting to breathe again because of one key approach – hybridisation. The Western has always had some genre mixes and, of course, a significant influence upon other genres and films (YouTube channel Cinefix cheekily picked Star Wars as their number one all time Western), but in the 21st century hybridisation has become the key. Films like No Country for Old Men and Hell or High Water, neo-Westerns, take the storytelling style and characters types of old and stick them in the American frontier, all to rousing results. Django Unchained is a Tarantino film that just happens to be set in the Old West, not strictly a genre mix, but this authorial tint from QT works wonders. And that wasn’t Tarantino’s only Western, 2015’s The Hateful Eight is a bottle style, murder mystery Western, referencing the historical context, taking the traditional characters and trapping them together for two hours and watching the sparks fly. The Star Wars space/sci-fi-Western is still going strong too – Firefly isn’t one of the biggest cult shows of all time for no reason. It’s the hybridisation that is saving the Western – a straight laced, fully fledged Western won’t fly anymore, people want the unique take that’s gonna be the difference.

But this brings us to Westworld, perhaps the most significant revitalisation of the Western this decade. Whilst the Old West of Westworld is an artificial construction and is only there as an aesthetic, a dressing for the sci-fi story and concepts of the show, it’s still a treat to see the Western nature being fully embraced once again. The sets, the costumes, the props, the music, the cinematography, it’s all in classic Western style despite this narrative-within-a-narrative-style of Westworld. Heck, even the characters are straight out of the Old West, be they a host or a human; there’s Dolores, the victimised heroine-turned badass, Maeve, the rebel, the Man in Black, the mysterious violent outlaw, and Teddy, the sincere guy who just wants to be reunited with his girl. If the Western was dead, then Westworld is bringing it back in a way you may never have anticipated.

Westworld season 2 will air on April 22nd on Sky Atlantic.