It’s that heavy beating bass drum, pounding only ever-so-slightly less powerfully than your own terrified heart. It’s seeing your torch slowly die and feeling that sense of hopeless dread as the darkness slowly envelops everything you can see. It’s the knowledge that you are being hunted, that you are prey for the faceless monster that haunts these woods. That’s the terror that 2012 indie classic Slender induces, and that’s the true power of horror in video games. 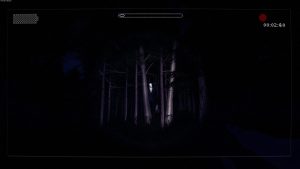 People often talk about what makes a great horror movie, and the techniques and tropes that go into really making you sweat in the cinema. And yes – horror movies can (and often do) shock, terrify and unnerve us, whether through jump scares, perfectly uncanny sound mixing, or through the sheer horror of the visuals. But I’d argue that if you really want to scare yourself silly, you should put away the Netflix remote and load up Steam, for it is video games that really push the boundaries of terror, whether through their immersion, emergent or creative narratives.

It’s no secret that games are far more immersive than films, and that’s simply down to the nature of the mediums. When your actions have an actual impact on what you are seeing, you feel more invested and connected to what is happening on-screen. That’s not to say that films aren’t immersive – there are myriad ways that a filmmaker can really make you feel what is happening in their picture – but the instant and unconscious connection between you and your game avatar naturally leads to you feeling a heightened response to whatever is happening in-game. Apply this to horror, and the effects are obvious. I’ve lost count of the number of times I’ve fallen out of my chair in panic at accidentally stumbling upon the slenderman, or felt my heartbeat raise just that little bit when the fog descends signalling the arrival of hell hounds in Call of Duty: World at War‘s zombies mode. Sure, the imagery in a film can seriously unnerve you as you watch it, and jump scares can make you choke on your popcorn, but nothing really comes close to the terrifyingly tangible feeling of being actually there in a game.

Tied to this is the fact that horror games are rarely repetitive, or at least that the narrative of a really solid horror game emerges from the environment rather than being the same story every time. The first time I watched Paranormal Activity or Scream they really got me, but now I know when the gore and jump scares come along I feel less and less scared with every rewatch. Contrast this to even a fairly linear game such as Dead Space: even though the story is the same and you explore the same areas of the USG Ishimura, the necromorphs can come at you in a thousand possible ways, keeping the tension tight on every replay. Then consider games with more emergent narratives in which your actions have a tangible effect on the mechanics of the game – use your torch too much in Slender, and you’ll be left in darkness for that much longer – and you can truly appreciate how the sometimes less structured approach that comes with games can make for a truly terrifying experience every time you load up a horror game. 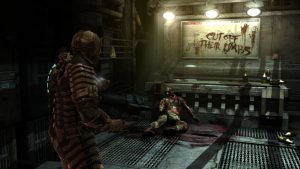 But what really fascinates me is the level of creativity that goes into terrifying you through a game. When the actions you take and the way you interact with the game-world produce a real impact in the way the game plays, it increases tension as you don’t want to do anything that will attract monsters or otherwise bring you face-to-face with the game’s most terrifying elements or the “Game Over” screen. Developers know this and can exploit it to force you into more and more horrifying situations, increasing both the number of scares and the fear that you’ll be dropped into another hair-raising situation; when done well, you find yourself constantly afraid of fear itself, a feeling only replicated in film in the build-up of the most shocking jump-scares. Consider Dead Space‘s blood-curdling warning telling you how best to take on the necromorphs by aiming for the limbs as a perfect example of engaging gameplay meeting spine-chilling storytelling. Or take a look at Amnesia: The Dark Descent and its insanity system: the longer you stay in shadows, the more insane your character becomes, causing hallucinations and eventually failure of the game. The thing is, the best way to escape the game’s monsters is to escape into the darkness. So you’re left with a choice: face up to the horrors the game throws at you, or slowly lose your mind? Such a system is typical of the way game developers can use their game’s mechanics to only ramp up the tension and fear the longer you keep playing the game.

None of this is to say that horror movies are any less enjoyable than horror games, or that horror movies can’t scare you – I’ve found myself leaving the lights on after watching a Psycho or a Conjuring more times than I dare admit! I’ve simply used films as a basis from which to compare how different mediums of entertainment can utilise their respective toolsets to scare us witless. That said, if you really want to terrify yourself this Halloween, I think it’s clear that the immersion, unique mechanics and lack of repetition present in games make them the most haunting form of entertainment. So next time you want a scare, don’t pull out the old DVDs; immerse yourself in the horrifying world of games instead.