Read more
You are at:Home»Culture»Stranger Things: An Ode to the Eighties
By Sophie Jones on October 27, 2017 Culture, Features, Features, Television

Although Stranger Things first came to Netflix only a year ago, last July, The Duffer Brothers have managed to recreate the eighties of their childhoods for another generation to fall in love with, by injecting the decade’s pop culture into every vein of the show. The twin brothers Matt and Ross grew up in North Carolina, near the series’ fictional town of Hawkins.  The series was originally Montauk, named for the inspiration of the town Amity, from the brothers’ childhood favourite Jaws. A poster for the film can now be seen in Will Byers bedroom.

They spent most of their childhoods devouring Stephen King paperbacks in one sitting, and the young characters they have created seem to be taken directly out of one.  Both brothers have claimed It as the most formative of their childhoods, and it shows – a gang of geeky boys (plus one girl) riding through the town on bikes, taking on a monster no one else in the town seems to  care about. 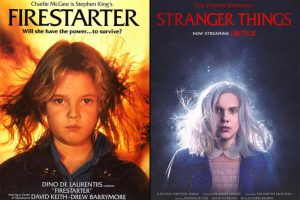 Even the now iconic title font takes its inspiration from the covers of the King paperbacks that had thrilled them as children.  They actually pitched the show with a poster of King’s 1980 novel Firestarter, replacing the title with their own and pasting a bicycle over the top. The story of the book itself also lends inspiration to the show, providing a young female protagonist with mysterious powers (portrayed by Drew Barrymore in the 1984 film adaptation) who is being hunted down by the government, and the idea that the use of these powers can cause nosebleeds.

Spielberg and King are written into every fibre of this show just as they were written into the brothers’ childhoods, and they pay playful homage to the cultural giants on whose backs they stand.  However, the most obvious inspiration for this series by far is Spielberg’s 1982 blockbuster E.T.  From the first episode, the connections are clear: a young boy takes in an alien, or in this case a young girl, who has the power of telekinesis, hiding her from his family in order to keep her safe.  Like E.T., Eleven wanders Mike’s house when everyone has left for work, and has only a limited  vocabulary. Will’s attempt to find solace in the garden shed is a direct reference to the scene in E.T when Elliot first meets his alien friend, although the monster Will meets is much less willing to be dressed up in a wig.  Instead, Eleven takes on this reference, even if the brothers have made the moment more touching than humorous.

The two creations are also linked in the number of Star Wars references used by their young characters.  Both Mike and Elliot show their strange new friends their Star Wars toys, and Dustin’s LEGO Millennium Falcon is telekinetically lifted by Eleven, harkening back to Luke’s trial set by Yoda in the 1980 Empire Strikes Back. Also, Lucas refers to Eleven as ‘Lando’ when he believes she is betraying  the boys, and they regularly refer to her ‘Jedi powers’.

Underpinning these major inspirations, a host of minor references line the fabric of the series.  The Demogorgon seems to take some of its design from the Alien franchise, including the trail of slime it leaves behind in the Upside Down.  The scene in which the boys are walking down the train tracks clearly takes from Stand By Me, a film based on The Body by Stephen King.  A poster for John Carpenter’s The Thing can be seen in the Wheelers’ basement, and the original soundtrack is based on his synth-heavy compositions.  Joyce (Winona Ryder) takes her son, Will, to see Poltergeist, (produced by Spielberg), also echoing the film with her attempts to communicate with her son through the walls.

The choice to cast Winona Ryder as Will’s mother also cannot go without notice.  The young figurehead of the late eighties, who found fame in films such as Beetlejuice and Heathers, becomes a mother figure to Eleven towards the end of the series, as well as being mother to the missing boy.  She truly embodies the series, being the eighties’ figure of youth; it was the eighties that gave birth to the exploration of childhood that is Stranger Things.

In anticipation of the new series, Netflix have released a series of posters in the style of iconic eighties horror film, including Firestarter, The Evil Dead, and Alien.  It seems that the homage will continue, but down a darker path.  However, the promotional picture released of the boys in ghostbusters getup shows that the brothers are still more than willing to have fun while paying homage to the wonder of their childhood cultural environment.

The brothers’ love of the eighties is born out of nostalgia for their own childhoods, captured in the gang of children and their teenage siblings, and surrounded by all the pop culture the brothers grew up with.  They have captured all the fear that came from King, the awe of Spielberg, and plenty besides, creating a monster of the eighties’ pop culture that formed the foundation of their creativity. It is this deeply personal connection to the decade, linked to the utter relatability of growing up, that fills the show with such irresistible nostalgia.