Read more
You are at:Home»Culture»“The script is great, everyone is great. It’s all about having fun.” – An interview with Dorian Gray’s Lead Actor Jordan Gardner
By Robert Pratley on October 23, 2017 Culture, Features, Interviews, Theatre

Continuing our coverage and support of Southampton University Theatre Group’s Halloween production of The Picture of Dorian Gray, I’m delighted to be able to sit down and talk to their lead Jordan Gardner, who plays the arguably tragic hero of Oscar Wilde’s only novel. Jordan thankfully gave me a few minutes of his time to talk about his TG experience, whether he sees a bit of Dorian Gray in himself and what exactly was the hardest part to master in the production.

When you first auditioned for the production did you always intend on playing Dorian? Or did that come later?

“It was between Basil and Dorian at first. I started reading the book before the auditions and I liked both characters a lot, but as the story progressed I just liked Dorian that little bit more.”

You obviously ended up as the main role. How is it having to play a character who should be likeable and yet at the same time the audience should want to hate him for what he does?

“That’s a bit harsh! But it’s okay, I have a lot of fun with the role. It is easy to tell I’m enjoying it, even though Dorian is doing terrible things. There is a clear downward cycle, he’s caught between a cyclone of realising he is doing bad, awful things and then not being able to stop himself.” 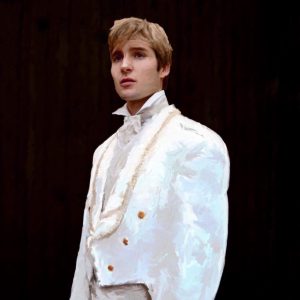 So you feel a real pity for him?

“Yes, I certainly do. Take his experiences with Adrian Singleton for example. At times Dorian shows he really cares for his, pity is certainly expressed for his friend when he realises what he has become. But at other times, he just doesn’t care at all.”

Do you see any of the Dorian Gray in yourself?

“No! No I don’t think so- I hope not! That doesn’t mean I don’t enjoy playing him, but I’m just not like him!”

“Oh definitely a tragic hero. His corruption by Lord Henry is so sad to watch. Dorian does want to be good again at times, but the terrible things he does just always come back to him in the end. The spark of nastiness doesn’t grow without Lord Henry’s influence over him. He ends up in a position to do real good and chooses not to.”

Would you say Theatre Group opportunities at Southampton University provide a good springboard for future success in acting?

“I don’t really know, but it is very fun to do. Any experience is good experience at the end of the day. Learning about things and being up on stage performing is a great experience.”

What was the hardest part of being involved in Dorian Gray for yourself?

“To be honest, trying not overthink the role of Dorian. The script is great, everyone involved is great. It’s just all about having fun for me.”

And finally, summarise the show in one single sentence?

“Our single most enjoyable play I’ve been in.”

It’s clear to see someone who has a lot of TG experience is very excited about what they are doing with The Picture of Dorian Gray and ultimately, it just makes the promise of the show all the more exciting.

The Picture of Dorian Gray will be performed by Southampton University Theatre Group on 1st-4th November 2017 at The Annex Theatre. Buy your tickets here.