It doesn’t seem all that long ago now that the famous author (and one half of the YouTube duo the Vlogbrothers) released a video in which he described the pressure he felt when it came to following up his critically acclaimed, multi-million copy selling The Fault in Our Stars. In fairness to him, it is arguably the book that propelled him into mainstream consciousness and significantly furthered his brand – it’s since been made into an extremely profitable film, starring Shailene Woodley and Ansel Elgort, and led to a rush to adapt the rest of his back catalogue onto the silver screen. Green explained that he may never write another book and that he’d had several false starts on book number seven. But then came June 22nd 2017 and the announcement that told us not only that book number seven was happening, but also when. Turtles All The Way Down hits shelves on 10th October in what is already a heavily anticipated release.

In honour of Green’s return, it’s time to review his work and settle the question once and for all (well, at least what my opinion on the matter is): which is the best John Green book? 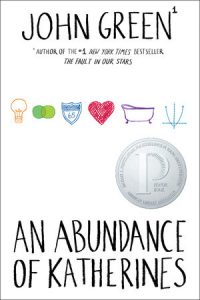 6. An Abundance of Katherines

An Abundance of Katherines is the black sheep of Green’s flock: its central protagonist fails to be as compelling as Green’s other leads, the central quirk to the story isn’t endearing, it’s far too short, and ultimately it’s a plodding story that doesn’t go anywhere and has nothing to it. Obviously as Green’s second book, the author was likely to be still finding his feet (despite the rousing success of his debut, more on that later…) but An Abundance of Katherines is more of an abundance of mundanity. A book about a genius who’s had loads of girlfriends and is obsessed with math – where’s the fun in that?

Had this been Green’s own work, it would undoubtedly rank higher, but Will Grayson, Will Grayson has a rather peculiar struggle. Co-written with David Levithan (side note: read Levithan’s fantastic Every Day when you can), the two authors pen the stories of their own Will Graysons and cross their streams accordingly. However, the problem Green faced here is that Levithan’s half of the book is far more compelling than his. Levithan’s Will Grayson is a troubled individual who is written so vividly you’ll swear you know dozens of Levithan’s Will Graysons in your life, is a likeable lead and has a fantastic arc. Green’s Will really just plays second fiddle and acts as a supporting character, heck I’d even hazard saying that it’s Tiny Cooper’s story more than anyone’s.

Despite the imbalance of these characters, Will Grayson, Will Grayson is uplifting, fun and moving. Above all, however, is its importance as a LGBT novel which transcends regular tropes and creates compelling characters with a satisfying story to fly the flag for this literary genre, being the first of its kind to reach The New York Times‘s children’s best-seller list.

3. The Fault In Our Stars 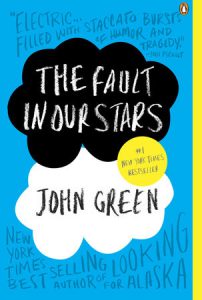 Despite its larger than life status and sales figures rapidly approaching 20 million worldwide, The Fault In Our Stars isn’t Green’s strongest work, but this is the part of the list where we separate the great from the damn near perfect – The Fault In Our Stars falls into the former category. Tackling a difficult topic such as cancer from a first person perspective is a thin line to tread on, but using Hazel as the book’s narrator is perhaps The Fault In Our Stars‘ biggest strength.

Hazel is a character with whom we can instantly sympathise for obvious reasons, but she becomes so much more than just this so quickly; Hazel is endlessly endearing throughout The Fault In Our Stars. And whilst Gus is the definition of cheese, he turns out to be likeable in the end as well. Green points out all of his generic features, but then saddles him with a huge weight to get him on our side and really cause him to hit home. Hazel and Gus have become the quintessential couple in modern-day literature – there’s not a person on Earth who can read this book and not want them to be together. Green’s writing is simply beautiful here, showcasing his inner Hollywood romantic yet connecting us to his characters in such deep ways that you don’t care about that. Again, great, but not quite the best…

This will likely either having you scratching your head or nodding in agreement; Paper Towns… above The Fault In Our Stars!?! But it’s true, Green’s third full novel shows the writer at his apex: a storyteller several novels in who knows exactly how to craft likeable and relatable characters, a clever plot and wrap it with subversive yet familiar themes.

Paper Towns’ characters keep it exciting and fun throughout. Q is the perfect everyman lead, hopelessly in love with the stranger across the street from him and stuck with his adorkable friends (the dorks being the loveable Ben and Radar). As a central trio, Green possibly hasn’t done any better – there’s a bit of all of us in the three of them. The central theme driving the story is that of friendship and the wonderful camaraderie between Q, Ben and Radar. You’ll want to stay with these guys for as long as possible and you won’t ever want it to end.

What Paper Towns does differently to stand out is with its central plot of the hunt for the mysterious Margo: it becomes not so much about finding Margo, but about the way in which Q has to pick apart what he knows in order to follow the breadcrumbs. Speaking of Margo, Green shatters every perception we have of the rebellious girl next door. A manic pixie girl? Think again. Margo is an idea throughout the book, and Green handles the culmination of her character with a healthy dose of cynicism and a crafty undercutting of our expectations. Fun, funny, gripping and heartwarming – Paper Towns, for my money, is definitive John Green. 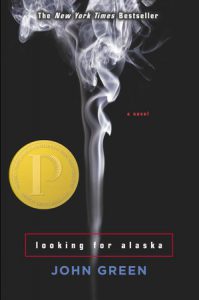 …But it’s not his best book. No, after rereading and reordering and rethinking and a lot of other re-ing, I’ve come to understand that Looking for Alaska is Green’s crowning achievement, and it was his first damn book! Similar to Paper Towns’ Q, Miles “Pudge” Halter is Green’s best leading man: charismatic, intelligent, the right balance of cocky and subdued, but above all deeply, deeply human. Green’s narrator articulates and vividly expresses both the best and worst of times in Pudge’s life over the course of a year, conveying an incredibly vast range of emotions throughout Looking for Alaska.

But Pudge is not alone. The Colonel, Takumi, Lara and, of course, Alaska become so much more than the caricatures that they are originally portrayed as; it’s not the Pudge show, it’s an eclectic cast who connect deeply. As with Q, Ben and Radar, the central friendship between Pudge and The Colonel is a powerful bromance which develops and strengthens so organically and naturally, with two usual opposites brought together by the simple fact that they are roommates who end up becoming so much more. Green knows how to do friendship and Looking for Alaska thrives because of it.

On the whole, it is arguably all-encompassing Green, with all his soaring highs and crushing lows, the spirit and vigour of his teen-centric stories, and the most detailed and complex conveyance of emotions. It has edge and heart in controversial abundance for some, but there’s a reason that this book continues to sell the number of copies it does and has the groundswell support for a big screen adaptation – Looking for Alaska is John Green’s masterpiece.

Turtles All The Way Down will be released on 10th October, distributed by Penguin Books.