Just when we thought celebrity feuds were dying down, Taylor Swift has set everything on fire again with an overly aggressive single that’s sure to have her arch-nemeses Kim and Kanye seething. The self proclaimed King and Queen of Music are just getting comfortable on their throne, but its former occupant is making an attempt to reclaim power. Sound familiar?

In some remarkable timing, ‘Look What You Made Me Do’ has been released mere days before the seventh season of Game of Thrones wraps up. The season finale offers a long-awaited episode as vengeful queen Daenerys comes face to face with her family’s usurper, Cersei. It got me thinking: what if Taylor and Kanye’s feud had happened as part of the hit fantasy show? Who would be who? And who would come out on top?

Taylor Swift would be… Daenerys Targaryen 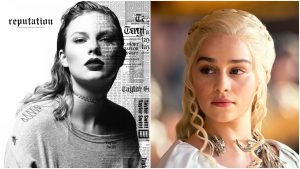 Obviously. The spurned former Queen was tossed from her kingdom and betrayed by former allies, but now she’s back with a vengeance. ‘Look What You Made Me Do’ presents the “Mad Queen” side of Taylor Swift, akin to when Daenerys gets a little over righteous with burning her enemies. Like the Mother of Dragons, everyone’s perception of Taylor differs depending on where you’re standing, but one thing’s for sure – she’s sailing straight for war just when her enemies thought she was silenced.

Similar to Taylor’s latest reinvention, Daenerys has had a number of different styles over the years, her naivety gradually peeling away as she makes her way towards her conquest. She hasn’t been short of men, either: while Taylor’s love life included Taylor Lautner (weird), Joe Jonas, John Mayer, Harry Styles, and Calvin Harris, Dany has a similar taste for men in power, turning her eye to Khal Drogo, Daario Naharis and most recently, Jon Snow. These are two blonde Queens you don’t want to mess with.

“I’ve got a list of names and yours is in red underlined / I check it once, then I check it twice, oh!”

Kim and Kanye would be… King Robert & Queen Cersei 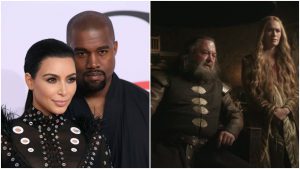 Like America’s very own Robert Baratheon, Kanye’s usurped the celebrity world’s former ringleader to declare unrivalled power over the world of music. By his side, his very own Kardashian, Queen Kim. With a public image of an attractive and diligent wife, Kim is not to be underestimated; this is a clever woman who knows how to play the media to her advantage. The release of footage showing Taylor’s apparent agreement to be featured in the lyrics of Kanye’s single ‘Famous’ had a Cersei ploy written all over it, and served as a crescendo in the disintegration of Taylor’s public image in 2016.

Of course, Robert and Cersei don’t appear to be a power couple quite like Kanye and Kim, but to a civilian of Westeros, the Baratheon and Lannister were at perfect harmony. It was in private that tensions bubbled and betrayals occurred. Not to cast too much aspersion on Kim and Kayne’s personal life, but a separation and even possible divorce were rumoured last year, yet faded into a whisper just a few weeks later. Could the cracks in the King and Queen’s castle lead to Taylor swiping back the heart of the common man?

The Kardashians would be… The Lannisters 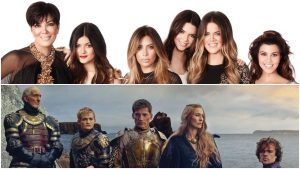 Let’s all be honest, if Game of Thrones look place in modern-day England, the Lannisters would totally be the subject of a reality television series. Impressive for their status, vast quantities of gold and bizarre relationships with one another (though no incest as of yet), the Kardashians marry for power and aren’t afraid to flash their good looks to get what they want. Instead of a patriarch like Tywin, they’ve got a fierce matriarch, but sadly there’s no sign of a sweet-hearted ugly duckling like Tyrion; the Kardashians are lions through and through.

Ed Sheeran would be… Ser Jorah 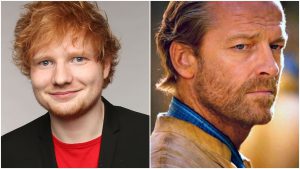 The faithful and kindly ginger, Ser Ed is a wise counsellor at Taylor’s side. Despite our desperate shipping, nothing’s ever happened between these two – perhaps Taylor friend-zoned him. But good old Ed would never betray Taylor to the lions across the Narrow Sea. He’s a steadfast ally for the Winter to come.

Alternatively, Ed Sheeran could be the tuneful Lannister soldier he cameoed as in Season 7 Episode 1, although I’m not sure he’d play much of a role in the war then. Saying that, the friendly Brit probably wants to stay as far from the conflict as possible, unlike Jorah, who’s desperate to return by Daenerys’ side no matter how many times she sends him away.

Donald Trump would be… The High Septon 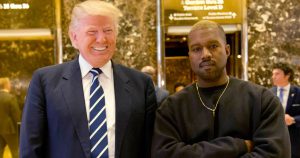 Does anyone have a clue what he’s on about? He claims to have been chosen by ‘divine intervention’ (a.k.a. complete chance) and his only mission in life is preaching nonsense. He actually makes the lives of those he claims to “help” far more difficult, and refuses to listen to anyone; other than Kanye. No, I’m not talking about Jonathan Pryce’s High Sparrow – though seeing him spar with Kanye would be brilliant, wouldn’t it – but President of the United States of America, Donald Trump. We all remember that famed selfie in Trump Tower after the election; it’s quite clear that Kanye tolerates Trump so as not to rock the boat, but we all know who really wears the trousers.

The world’s pretty sick of Taylor and Kanye’s egotistical feud, so 99% of Twitter users have been calling “shame! shame!” since Swift’s new single dropped. Watch out though: if you get too vocal, Kim might lock you in a dungeon with a zombie soldier to painfully torture you until the end of time.

While Game of Thrones winds towards a close, there’s a feeling that the war between Taylor and Kanye still has many instalments to come. It may not have dragons, or White Walkers, or Tyrion Lannister, but this feud looks sure to take some more twists in the months and years to come. Though throwing shade with lyrics isn’t exactly conquering a continent with three dragons – sorry, Taylor.