Read more
You are at:Home»Culture»The Emergence and Evolution of Grown-Up Animation
By Josh Nicholson on August 24, 2017 Culture, Features, Features, Television

Cartoons like Looney Tunes and Tom and Jerry were certainly appreciated by an adult audience when they were first released, but it’s hard to argue that their wacky antics weren’t primarily aimed at children. However, the critically acclaimed Rick and Morty is a reminder that animation is no longer exclusively for children. With Season 3 upon us, the time is just right for discussing the emergence of adult animation.

When The Flintstones premiered on ABC in 1960, it became the first animated series to air regularly during prime time. Inspired by The Honeymooners, the Hanna-Barbera series is a sitcom at heart. Fred and Wilma Flintstone might be animated, but they are written as a relatable married couple. Despite the Stone Age setting, The Flintstones deals with everyday marital issues like forgetting to buy an anniversary present or coping with the in-laws. It even has continuity, Wilma giving birth to their daughter Pebbles at the end of Season 3. The Simpsons adopted a very similar setup when it premiered in 1989. Homer, Marge, Bart and Lisa are all animated, but they’re placed in very mundane situations. The popularity of both The Flintstones and The Simpsons inspired imitators and showed that animation isn’t a genre in itself, but another tool to tell stories. 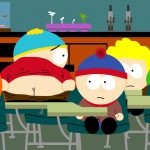 However, both The Simpsons and The Flintstones were still family-friendly. It took the popularity of South Park to fully step into the world of adult animation. Created by Matt Stone and Trey Park and debuting on Comedy Central in 1997, South Park follows the exploits of four foul-mouthed children living in Colorado. It quickly became infamous for using ridiculously crude humour to deliver political commentary and satire. Although Parker and Stone’s creation was attacked by various groups (for instance, the Christian Family Network called it “vile trash”), South Park’s popularity inspired many imitators and continues to push the boundaries wrongly established for animation.

Seth MacFarlane’s Family Guy is one such imitator, combining The Simpsons‘ family dynamic with South Park‘s off-colour humour. While MacFarlane’s work is often criticised for being far less intelligent than either of its inspirations, it is yet another example of adult animation being consumed by the mainstream. Whether you enjoy Peter Griffin’s antics, Family Guy‘s wild success can only help forward the idea of animation for adults.

That brings us to Rick and Morty. Although it isn’t nearly as crude as South Park, Rick Sanchez’s madcap science-fiction adventures are far from family-friendly. Created by Justin Roiland and Dan Hartman, Rick and Morty may have started life as a crudely animated Back to the Future parody, but it has grown into one of the most beloved animated shows of the last decade. Roiland’s unconventional brand of wacky comedy certainly isn’t for everyone, but Rick and Morty mixes it perfectly with high sci-fi concepts and the occasional deep theme or character analysis. 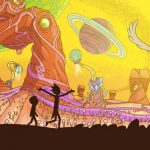 While Star Trek and Doctor Who both have to worry about limited TV budgets when constructing their science-fiction worlds, Roiland and Hartman aren’t constricted by the need for expensive sets or elaborate makeup. Like Matt Groening’s Futurama before it, Rick and Morty uses the freedom granted by animation to show elaborate alien worlds and intricately designed extra-terrestrials. It’s a great example of the benefits of using animation to tell stories: Roiland and Hartman exploit the medium to its fullest in order to achieve something that would be impossible in live-action.

Animation is in an interesting place in 2017. With the traditionally childish Cartoon Network churning out cult hits like Adventure Time and Steven Universe, and Sausage Party becoming the first American CGI-animated film to be rated R by the MPAA, Rick and Morty is only one example of animation for grown ups. Now, in the famous words of the Porky Pig, “That’s All Folks!”.

Rick and Morty Season 3 continues on Netflix every Saturday. Check out our review of Episode 3 here.