Read more
You are at:Home»Features»Wonder at the Box Office: What does Wonder Woman’s success mean for female filmmaking?
By Alice Johannessen on July 30, 2017 Features, Features, Film

Wonder Woman has achieved indisputable commercial and critical success. This week Patty Jenkins’ blockbuster overtook Guardians of the Galaxy 2 to win the title of summer’s biggest box office hit. New Justice League footage and the confirmation of a sequel at last weekend’s Comic-Con demonstrate DC’s newfound faith in the Amazonian super-hero. These achievements have led many to hail the picture as the start of a new age – an age of cinema in which female-led narratives and films directed by women are not rare jewels, but common as muck. But is this jubilation premature or an accurate reflection of the current filmic climate?

The pressure on the film to attain such success was immense. Kristen Schaffer, the executive director of ‘Women in Film’ (WIF) asserted: “We needed this movie to do well. We wanted to be able to say to the filmmaking community: A superhero movie made by a woman can break box-office records”. Despite a seemingly endless stream of superhero blockbusters, Patty Jenkins was the first female director to be entrusted to helm one. Thus, an unfair but very real weight of breaking stereotypes, expectations, and ceilings meant Jenkins had to be just as strong as Diana Prince herself.

Up to this point, the last cinematic female-led superhero endeavor would be Halle Berry’s notorious Catwoman. The film received universal panning, bombed catastrophically at the box office and, to add insult to injury, won four Golden Raspberries. If Wonder Woman followed similar suit, the stigma would remain.

But instead of a silly, empty mess, we got a layered heroine with flaws. Diana Prince is both naïve and headstrong, a mighty warrior with the biggest heart. The optimism and sincerity of Wonder Woman came as a welcome break from the gritty, dull and endlessly dark Snyder-verse. And audiences showed up to support it. 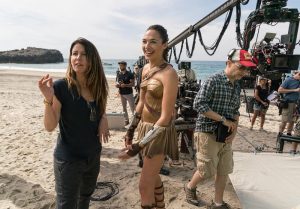 Patty Jenkins and Gal Gadot behind the scenes of ‘Wonder Woman’. Credit: Flicks and The City Clips

What does this mean for future female-led films? Wonder Woman’s success certainly gives the seal of approval for Marvel’s first attempt. After 16 films (plenty of time to fit in a Black Widow movie you’d think?), Brie Larson gets her turn as Captain Marvel in 2019. Until then, TV is three steps ahead. Supergirl season three returns this October and Jessica Jones is expected to return in 2018.

While Wonder Woman is a victory of sorts, it’s still a film by a white director with a white heroine. Much work is to be done before every inch of society is projected as a hero on the big screen. Despite walking away from directing Black Panther, Ava DuVernay’s A Wrinkle in Time suggests a move in that direction. Despite not being a classic superhero film, the film’s protagonist Meg can be seen as a different kind of hero.

As much as we’d love it to, Wonder Woman‘s success doesn’t magically undo decades of cinematic sexism. However, it certainly sends a clear message to studios: Films helmed by women can make money. We can only hope they are listening.