Read more
You are at:Home»Features»Acts to look forward to at BoomTown 2017
By Freddie Stevens on July 3, 2017 Features, Features, Festivals, Live

BoomTown returns to Winchester for Chapter 9: ‘Behind the Mask’ – another unapologetically bonkers weekend of head spinning fantasy and genre-spanning music. The combination of alternative music, fringe comedy, theatre arts, and the cornucopia of colour is the curious raver’s paradise, and it’s barely half an hour away from Southampton! BoomTown’s full line up is enormous, but there are a few acts that you simply cannot miss! 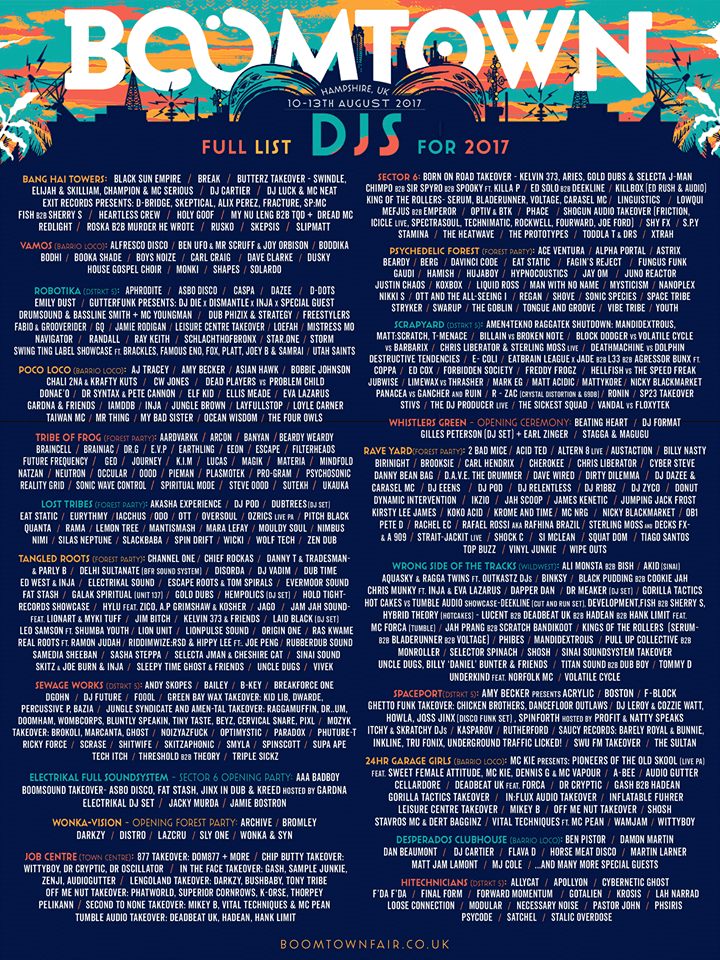 Joy Orbison hit the ground running with his debut single ‘Hyph Mngo’. From then on he has coalesced house, garage and jungle into his progressive repertoire. He bucks the industry with the leisurely pace he goes about releasing new material – but that can be forgiven when you run two record labels. He manages Hinge Finger along with Will Bankhead, and SunkLo, which he runs alongside his regular studio partner, Al Green AKA Boddika. Green’s raw combination of drum & bass, house and techno is truly electrifying. Whatever the shade of his music, it always has the clear stamp of Boddika’s fierce edge. The collaborations between Boddika and Joy O are as enchanting as they are exhilarating, with ‘Mercy’ and ‘Dun Dun‘ the exemplars for mesmeric house. Joy Orbison has come a long way from his Fruit Loops and 8-bars to headline the bassline circus of the Barrio Loco, and with his pal Al in town the carnival corner is undoubtedly unmissable.

If you find yourself in the ruling fiesta district, make sure you check out Horse Meat Disco, a tag team of the UK’s finest funk aficionados, dedicated to the industry of human happiness. Their compilation albums have received wide critical acclaim and boast the best in underground New York disco. James Hillard, Jim Stanton, Severino and Luke Howard (aka Filthy Luka) have led the way with packed residencies at The Eagle in London, Lux in Lisbon, Tape in Berlin and Cihan in Istanbul. They’ve even made the odd appearance at Junk, the fabric of the South Coast!

The Specials have been announced as headliners for this summer’s festival. The 2 Tone and ska legends will bring their rocksteady beats, Doc Martens and Wayfarers to Hampshire, hot on the coattails of Madness’ headline slot last year, thus continuing BoomTown’s streak of ska music. Even if drummer and founding member John Bradbury sadly passed away in 2015, the band continue to fill dance halls for fans young and old with hits such as ‘A Message To You Rudy’ and ‘Ghost Town’. The Specials will be found in TrenchTown in the very heart of the city.

“Who you tryin’ ta mess with ese? Don’t you know I’m loco?” Hip-Hop legends Cypress Hill will join the ska superstars on the TrenchTown stage – just toss that ham in the frying pan. B-Real thankfully found time outside his Prophets Of Rage schedule (the supergroup he formed with Chuck D, DJ Lord of Public Enemy, and three-quarters of Rage Against the Machine) to make the trip to BoomTown this summer. The West Coast quartet recently celebrated the 25th anniversary of their iconic self titled debut by re-releasing it within a black resin sculpture of their skull logo. Expect a set list stuffed with classics like ‘Insane in The Membrane’ and ‘ I Ain’t Goin’ Out Like That’.

Also, for the first time ever, the official Boomtown Costumiers are opening their treasure clad doors to the citizens of BoomTown! Simply choose your inner character from the list below and email costumes@boomtownfair.co.uk to get a handcrafted bespoke costume made especially for you with all fees going directly to the independent talented designers!

Coach/Shuttle Traveller packages are the very last tickets available so if you’d like to be a part of this year’s adventure, snap one up before they’re gone! BoomTown have teamed up with Big Green Coach to bring you to the festival gates from 55 locations around the country.