The announcement of Channel 4’s Ackley Bridge, a new drama set in Yorkshire, has proven that British audiences have not yet had enough of the run-of-the-mill school drama. It promises us a gritty narrative, dealing with both the union and (unsurprisingly), the expected fallout between the merging of two different comprehensive schools – one predominantly White British and the other with a heavy Asian background. It will deal with themes of poverty, sexuality and racism, all of which are embodied in the day-to-day angst of disobedient teenagers and reluctant teachers. Will it live up to the demands of an audience still reeling from the loss of Ackley Bridge’s predecessor?

Channel 4 has undoubtedly seized the gap in the market following the de-commissioning of BBC’s Waterloo Road in 2015. The show ran for nine years with a loyal following, and it proved to be a cash cow for both the BBC and its production company, Shed Media. Having faced pressure from the BBC to relocate its production from Manchester to Scotland to increase BBC Scotland’s drama output, Waterloo Road ultimately faced an impending doom. With its unrealistic and unconvincing move to Scotland justified with ‘we’re going to open a boarding school’, the show began clutching at repetitive straws. Its dynamic changed, and what once was a gritty young adult drama turned into a poorly executed soap. Of course, audiences slowly began to lose interest, and so did the BBC. Surely then, this was the death of the modern-day school drama? 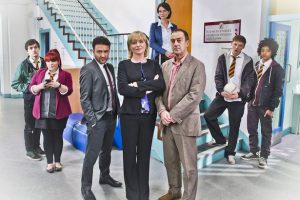 The BBC promised a replacement, although this was too slow to surface. Channel 4 saw the previous levels of engagement held between audiences and the conventional school drama, and fired ahead with Ackley Bridge before the BBC presented a feasible alternative. With the few details that have been released, it’s clear the broadcaster is attempting to directly step into those shoes left by Waterloo Road. But, if the BBC’s previous attempt at school drama has demonstrated that these shows are not infinite, why is Channel 4 bothering to wade into such waters?

Firstly, the ‘relatable’ school format means programmes like these generate a loyal following and consequently, are worth big money. At some point in our lives, we have all experienced the trials and tribulations of the secondary school education system. We’ve either loved it or hated it, but we can all understand and relate to a poorly qualified teacher struggling to control a class, or big-bully Ned causing a fracas at the back of a classroom. As such, a positive reception of this type of drama is somewhat guaranteed – the school environment is not unfamiliar, nor is it scary, and we can all identify in some way. Ackley Bridge’s predecessor proves that such school-dramas have big money potential. Starting with a mere eight episodes, similar to Ackley Bridge’s six-part run, Waterloo Road escalated into two-hundred episodes, millions of fans, backstage content, merchandise and a spin-off series. One of the show’s writers Ann McManus, co-founder of the programme’s production company Shed Media and an ex-school teacher herself, claimed in an interview with The Guardian that ‘Waterloo Road was the best thing we’ve ever done’. Although Shed Media was also responsible for two other top-grossing major productions, Footballers Wives and Bad Girls, her praise for Waterloo Road is justified by Shed Media’s sale to Time Warner in 2010 for a neat £100 million. With the school-drama gap now open, and both the financial and viewing figures for such dramas being confirmed, it’s easy to see why Channel 4 have taken the plunge to rejuvenate the school drama once again. 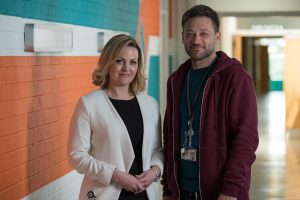 Following in the footsteps of a major predecessor poses one vital question: How will Ackley Bridge present anything new? Or rather, how will such a show manage to present something different, whilst adhering to the demands of an already-established audience demographic? Of course, its relatable format provides a brilliant platform to address new modern day issues that continue to surface. By streamlining storylines through both adults and students, different types of drama can simultaneously run, from schoolgirl fallouts to sordid teacher affairs. Consequently, the school drama appeals to audiences both young and old, but how much more ‘new’ drama can we suck out of a typical school scenario? Ackley Bridge is sure to push the boundaries of our expectations, but will these storylines be well executed or down right laughable?

Ackley Bridge has already generated its fair share of drama. After the saddening events of the Manchester terrorist attack on 22nd May, Ackley Bridge’s pilot episode, which involved a student threating to bomb the academy, was rushed back for a last minute re-edit to alter the storyline. Moreover, some fans have criticised the apparent ‘rip-off’ of Waterloo Road, having noticed Ackley Bridge’s character profiles and cast line up. The cast includes some familiar faces, including actress Lorraine Cheshire, who left her role as Waterloo Road’s Fleur Budgen in 2012 and is due to appear as Lorraine Bird in Ackley Bridge. Moreover, actor Paul Nicholls was originally cast in Waterloo Road as PE teacher Jez Diamond, before being fired three days into filming in 2011. Co-incidentally, Paul Nicholls has reprised this role as PE teacher Steve Bell in Ackley Bridge. Are these re-castings simply a mere co-incidence? Either way, it will be interesting to see how both Cheshire and Nicolls tackle their new roles.

Undoubtedly, there is some scepticism around Ackley Bridge. Will the drama be criticised as a re-incarnation of Waterloo Road, in an attempt to adopt its ever-strong fan base? Or will it successfully establish itself in its own right, highlighting us to the importance of a modern, multicultural Britain? In my opinion, the programme looks promising, and it will be good to see the school-drama re-live once again.