Read more
You are at:Home»Features»The Alien Series: Can Covenant Steer it Back on Track?
By Tom Wilmot on May 16, 2017 Features

Like many other long running franchises, the Alien series has had its fair share of highs and lows throughout the years. Beginning in 1979 with Ridley Scott’s ground-breaking sci-fi horror titled simply Alien, the franchise has gone on to produce three direct sequels, two prequels and created one of the most iconic sci-fi villains of all time, the terrifying Xenomorph.

Many will agree however that as the series has gone on, the quality has waned significantly, with everything after 1986’s Aliens being seen as a disappointment. Looking back on the series, we can look into what made the original so great and how later iterations failed to live up to expectations.

Alien was a unique film come its release in 1979. Essentially a slasher movie in space, it created a sub-genre of movies that we still see today through the release of films such as Life and Apollo 18. The movie is tense throughout and the atmosphere that director and creator Ridley Scott created, made for a truly scary film. The characters are memorable and you come to care for their safety, particularly for Sigourney Weaver’s now beloved Ellen Ripley, who only becomes the clear protagonist two thirds of the way into the movie. The idea of a small crew isolated on this giant ship being hunted by this seemingly unstoppable creature is terrifying and it works incredibly well throughout.

The practical effects for the time were fantastic with the bio-mechanical look of the Xenomorph being very unsettling. But everything else from the look of the ship to the planet backdrop of LV-426 was very ahead of its time. 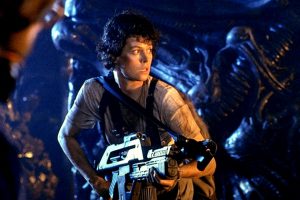 A sequel came along in the form of 1986’s Aliens directed by James Cameron. Despite taking an almost completely differing tone to its predecessor with a much larger cast and more lively characters, notably the colonial marines, the film still manages to be successful as it doesn’t re-tread the themes of the original. Cameron took what he described as the “used future” look that Scott had created and built upon it with new additions. The transformation of Ripley into a full-on action hero, the memorable characters of Newt and Hicks amongst others, as well as the introduction of the horrifying Queen Alien were all welcome additions that helped the film stand on its own from the original.

It was with the release of the very disappointing Alien 3 that things began to take a turn for the franchise. Director David Fincher has all but disowned the film throughout the years and remained highly critical of 20th Century Fox interfering far too much with the production process. The studio’s intense control over the creative direction meant that the film was at times an incoherent mess. The killing off of Newt, Hicks and Bishop from the previous film was a slap in the face to fans from the start. The fact that the film doesn’t even try to sufficiently replace them is somewhat worse. Boring characters, a tiresome story and a complete lack of tension meant that Alien 3 was a critical flop. It reuses the story of the first film with one alien stalking an isolated group. The problem with this story was that we’d seen it before. 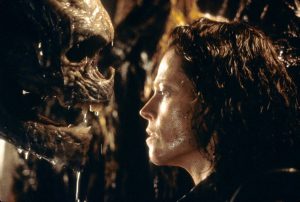 This is unfortunately the same case for 1997’s Alien: Resurrection. After what are the least Alien-like opening credits you’ve ever seen, the film introduces a new ship crew whose entrance appears to be an attempt at a new ‘Nostromo’ esc crew from the original. Resurrection however follows many of the errors of 3. Whilst it is definitely a more action oriented film and doesn’t take as long to get going, it’s still just more of the same. You know exactly how the film is going to play out and because of this, all tension is lost. The only unexpected feature was the awful xenomorph-human and the less said about that, the better.

It was only with the release of Prometheus some fifteen years later that people had hope that the series may find its feet again. Ridley Scott was returning for the first time to write and direct, the trailers were reminiscent of the original Alien trailer and it looked like a lot of backstory would be added to the origin of the Xenomorph.

Despite being a beautifully made and well-acted film though, Prometheus disappointed fans due to its nonsensical plot and unsatisfying conclusion. The marketing really crippled the film, as people went in expecting something similar to the original Alien and what they got was instead a more philosophical sci-fi. After this let down, many fans felt that the series had had its last shot.

It appears that the series has another chance though with Alien: Covenant. Ridley Scott is again involved in what is going to be the direct sequel to Prometheus, with Michael Fassbender and Noomi Rapace both returning to reprise their roles. Scott has promised a return to the series’ horror roots and if the trailers are anything to go by, he seems to be a man of his word. The film will take place in-between Prometheus and Alien, further following the events that set up the original film. Covenant is made up of an excellent cast with the formerly mentioned Fassbender and Rapace being joined by James Franco, as captain of the Covenant, Katherine Waterston and more.

For the film to be successful, it needs to avoid the mistakes of 3 and Resurrection by not being a re-tread of what we’ve already seen. If it can add enough new elements to keep things interesting whilst retaining the features that made the first films so memorable, it should set the series back on track.

Alien: Covenant is out now. Check out the latest trailer below: