Read more
You are at:Home»Features»“All you can do is bring yourself to the role”: Danny Lee Wynter talks Forty Years On, Diversity and Donald Trump
By James Barker on April 12, 2017 Features, Interviews

In just under a week’s time, Chichester Festival Theatre welcomes a new adaptation of acclaimed playwright Alan Bennett’s very first work, Forty Years On. Set in a public school on the South Downs in 1968, the Headmaster (Richard Wilson) is preparing to retire, but his final task – to appear in the specially written school play – is jeopardised by various mishaps, not to mention that he’s yet to read the script! Taking the whole thing rather too seriously is teacher Tempest, portrayed by Danny Lee Wynter, who we spoke to as Forty Years On nears the end of rehearsals and prepares to take to the stage.

You’re playing one of the school masters, Tempest, which was the role taken by Alan Bennett himself in the original production in 1968, and then by Stephen Fry in the 1984 production at Chichester. How does it feel to be following in their footsteps?

Terrifying! I’m a big fan of Alan, I’m very familiar with his work, so to be given the opportunity to play a role that he immortalised in the first ever production is an honour that comes with its own challenges. He’s so recognisable and identifiable as a character in British culture, and rightly so too. On one hand it is an overwhelming prospect, but at the same time I’m a big believer that you can only bring yourself to the role. The more of yourself you bring, the more interesting it is.

Stephen is someone I know, so I did actually get in contact with him to have a chat about it. He said he wouldn’t dream of giving me any tips, which is very sweet of him! It’s one of those things where it’s such an iconic playwright and such an iconic role, all you can do is bring yourself to the role.

Could you tell us a little bit about your character? 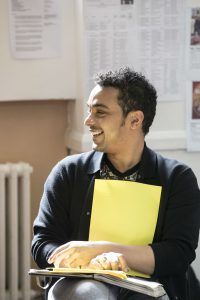 My character, Tempest, is a junior housemaster at Albion House. He is a relatively new staff member and he probably has aspirations of being a creative, but instead he’s found himself in this school teaching for whatever reason. He’s a very bright young man, very self-aware but unfulfilled in his position at the school. He sees he’s got bigger fish to fry and I can’t see him sticking around at Albion House that long! He’s putting on a play – a play within a play, called “Speak for England, Arthur” – and Franklin, played by the wonderful Alan Cox, has given Tempest a huge part in the proceedings. He’s quite chameleon-like as he flits around the stage playing all these different characters in sketches.

As proceedings go on, the play doesn’t go to plan at all – in fact, it’s a disaster by the end of the evening! Tempest’s becoming increasingly frustrated that this play he’s given to parent is under threat, and it may stop at any minute due to the Headmaster’s (Richard Wilson) constant interruption and the boys’ bad behaviour. Like all comedy, there’s real drama, real threat at the middle of it; and that real threat is that this is really important to Tempest, but the people around him aren’t taking it as seriously as he is. He does take himself incredibly seriously!

You’re working alongside a very talented cast including the legendary Richard Wilson; how is the rehearsal process going? Are you looking forward to getting on stage in just under two weeks’ time?

It’s wonderful! I’m very familiar with the work of most of the actors in it. In fact, Jenny Galloway, who plays Matron, I remember seeing on stage in Oliver! as a child! I don’t take that lightly, it’s a wonderful thing; a joy of the job is that on occasion you find yourself side by side with people who were there at the beginning of your own journey as an actor.

There’s a really chilled and friendly atmosphere in the room which I put down to Daniel (Evans, the director), who I’ve known since I was about 19! Though we’ve never worked together until now, so it’s been an absolute delight. I put it down to his temperament that the rehearsal space he creates is one of great willingness to try, and even fail – fail again, and fail better! It’s been a dream, particularly working on an Alan Bennett play, because I’ve been a fan for years and I’ve not had the opportunity to do one before. 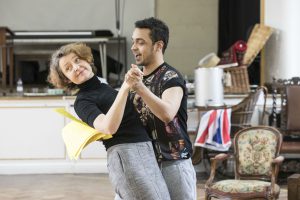 There are 52 young people from the local Chichester community in the production. Have you met them yet, and are you looking forward to working with them?

We start working with the young people this afternoon, which is a daunting but very exciting prospect! Up until now they’ve been in Chichester and we’ve in London, but this is the week where we meet them and put it all together. At the moment I’ve been playing certain scenes to a chair! We finally have all those pieces of the jigsaw coming together, and that’s a very exciting, slightly frightening moment for us.

The play was written and is set in 1968, and looks back at the history of the early 20th century including the First and Second World Wars. Do you think that in anyway limits the play for the young people of today, or do you think they can find something within that to connect with?

We’re living in a time where this country is in a huge moment of question and change over its identity. The First and Second World Wars – which are very much central themes in play – are absolutely vital in understanding questions about the threat of war today. There’s a moment in the play where Neville Chamberlain, the Prime Minister who led us into the Second World War, is put ‘on trial’, and we see how he was hailed as a hero on three occasions for seemingly preventing war with Hitler. Then, of course, war did break out, and within a few years of Churchill taking over, Chamberlain’s just written out of history. I’m sure that will resonate with images of Theresa May meeting Donald Trump. It’s absolutely terrifying to think that people we see as clowns, not posing much of a threat but just being vile, can change everything in an instant. There’s so many parallels.

I think the idea of history being something which we learn from is really interesting. One of the themes we explore by looking at the World Wars is ‘Man versus Myth’, and I think it’s fascinating right now to look at Tony Blair’s role in society. His actions, in a roundabout way, led to many civilian deaths, and until very recently he seemed to be written out of history. But now he appears to be on a tour of the country, giving his thoughts on Brexit, and many people – right-wing or left-wing – are saying they agree with him. It’s so interesting how fickle history is, and essentially that is at the heart of Bennett’s play.

Moments in the play harken back to 1938 and 1901, but it’s actually no different to what’s happening now. There’s a moment in the play where I discuss the Boer War and say: “Well, what’s that got to do with us?”. It’s people in a civilised society that don’t show any respect or values, and there’s a similar thing – well, the exact same thing – going on right now, with people saying that about immigrants and refugees. It’s frightening how many parallels they are.

You co-founded the Act For Change project, which campaigns for greater diversity and representation in the arts, both in theatre and on screen. How much progress do you think has been made, and how important are young people in keeping that momentum going?

I think, like all things, it takes a while before you can assess how much of a difference it’s made. I do know that, from the countless emails, we seem to be being noticed, and even today somebody at a meet-and-greet at Chichester came up to me and thanked me. But I think it’s going to take time to tell, as there were people in the generation before me that were fighting the same battles for diversity in the 80s. When we set Act For Change up, they came to us and said: “We thought we sorted this out, we’re so sorry.” After a decade, the sort of programs that celebrated diversity in our country – The Real McCoy, Goodness Gracious Me, to name a few – just disappeared, and that generation felt they hadn’t quite worked it out, that they weren’t able to sustain it.

Right now there is some progress being made, in theatre particularly, but still not enough. In the minds of the media and the people that run theatres, including writers, diversity seems to be just about colour, and not everything. I think one of the most important questions to ask ourselves is how access to the arts is limited by class. In my mind, class is the biggest factor in diversity that needs to be addressed because it has so many links to all of the other problems.

There seems to have been some progress in TV, but the diversity on offer tends to be from the same pool of actors. The leads are often played by Thandie Newton, Lenny Henry, Meera Syal, Idris Elba, etc., who are all brilliant, but have profile already. It’s almost like the TV bosses think they only have six or seven non-white friends, and then put them in those projects. As wonderful as those actors are, I do roll my eyes and think that countless others are gagging for that opportunity.

Saying that, I think there are people in the arts who are trying to inject opportunity into people who don’t have it. The frustrating thing about diversity is that you shouldn’t have to talk about it, you should just do it. It’s our responsibility as writers, producers and directors that the plays were create explore, or at least specify, a character as diverse – then there’s really no excuse for it not to happen!

Danny Lee Wynter performs as Tempest in Forty Years On, which is at Chichester Festival Theatre from 21st April to 20th May. Tickets are available at a discounted rate through their 16-25 year old scheme.