Read more
You are at:Home»Features»The importance of a soundtrack to a film
By David Mitchell-Baker on March 12, 2017 Features

As massive a hit as Guardians of the Galaxy was back in 2014, the fantastic Awesome Mix Vol. 1 which soundtracked the movie was just as good. The 12-song collection featured the likes of David Bowie, The Jackson 5 and Marvin Gaye and proved to be instantly endearing to legions of fans; the compilation selling over 2.5 million copies worldwide in 2014 alone. With Guardians of the Galaxy Vol. 2 just around the corner and the promise of a brand new Awesome Mix to go with it, hinted to feature the likes of Sweet’s ‘Fox on the Run’ and Fleetwood Mac’s ‘The Chain’, it felt appropriate to examine the importance of the soundtrack to film and why and how it can work so well.

It’s important to note that there is a significant difference between a film’s soundtrack and a film’s score. Pretty much every film has a score, music that is largely orchestral and instrumental which plays during and in between scenes. Scores on their own have become entities that can stand separate from their respective films; Star Wars, Indiana Jones, Jaws, Lord of the Rings, Psycho, The Godfather, Jurassic Park: all movies that have scores that are instantly recognisable and hugely iconic in their own right. Scores are used to build tension, set the film’s tone and convey emotion, to name but a few functions. A soundtrack on the other hand is a compilation of songs, some original and created for the film, others pre-existing material, and they can act in a similar way to a score or simply be released as a piece of merchandising or promotional material for a film. 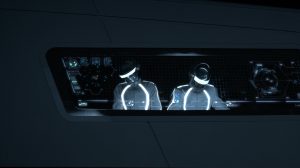 Where a score sets the tone, a good soundtrack gives a movie personality. What was so great about Guardians’ Awesome Mix was how it fit to the character of Star Lord, the creator and owner of the mixtape, and the overall tone and charm of the film. It helped Guardians to feel unique. Whilst it shared elements of previous superhero/comic book movies and sci-fi/fantasy films, the Awesome Mix helped to make it feel very distinct compared to all its predecessors. It made the movie cool and instantly that much more likeable, all thanks to a collection of rock and pop tunes. This is something that Tron: Legacy achieved as well – Daft Punk’s soundtrack aided the movie immensely and became one of the film’s most acclaimed parts, it took an old school 80s movie and helped to revitalize it with funky electro-dance music, instantly giving it a whole new personality. Suicide Squad on the other hand? Ehh… not so much… In trying to pull a Guardians it misfired and had a disjointed and edgy-wannabe cast off relative to James Gunn’s brilliant creation.

The mark of a great soundtrack is something that becomes instantly memorable, recognisable and, at times, even bigger than the film itself. Take for example Armageddon and Titanic; both big box office earners, both famous 90s movies, both had a big impact on pop culture. But it is perhaps the music that is the most fondly remembered these days; Armageddon had Aerosmith’s ‘I Don’t Wanna Miss a Thing’ and Titanic had Celine Dion’s ‘My Heart Will Go On’. The former set the melodramatic and larger than life tone and aura of the movie, the latter enhanced the love story and romance of the ill-fated lovers. Rarely does anyone think of these films and not think of these songs, they’ve become that big and that famous. 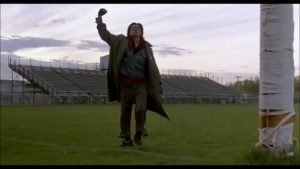 Bender in The Breakfast Club: perhaps the most iconic soundtrack moment in film? (Image courtesy of Universal Pictures)

Whilst the soundtrack may not quite be as prevalent as it once was, let us not forget the greatness of those from the 80s and 90s. You had songs that beautifully capped off movies and etched them instantly into your memory, a la The Breakfast Club and ‘Don’t You (Forget About Me)’ by Simple Minds. Songs that defined movies, like Ben E King’s ‘Stand By Me’ from, you guessed it, Stand By Me. Songs that, like Guardians, gave the movie their identity, like the plethora of great tunes on the Dazed and Confused soundtrack. And then there’s Tarantino and his personality injecting use of music in Reservoir Dogs and Pulp Fiction. The soundtrack can be the ace in the hole for a director, just look at the films listed above for a who’s who of great film makers from the last 30 years.

And, of course, there’s the musical. The elite level musicals feature songs that can stand on their own and live on past the closing credits of the film. Think ‘Singin’ in the Rain’, ‘Beauty and the Beast’, ‘If I Were a Rich Man’, ‘Circle of Life’, ‘Time Warp’ and, most recently from La La Land – ‘City of Stars’, ‘Another Day of Sun’, ‘Someone in the Crowd’, ‘Audition (The Fools Who Dream)’… it’s so hard to pick one! These songs are embedded into their films from a story, character and genre perspective, but they’ve become great songs in their own right.

So although it’s not as big as it once was, the soundtrack is still an important part of cinema. So often it can help a film to become instantly memorable and give it that much more of an edge over other similar films. With the rousing success of Awesome Mix Vol.1, I for one cannot wait to see just what James Gunn has up his sleeve with Awesome Mix Vol. 2, here’s hoping that it too can give Guardians of the Galaxy Vol. 2 its own personality in the way that its successor did for Guardians of the Galaxy.