Read more
You are at:Home»Features»Why Princess Leia is a BAMF
By Carly-May Kavanagh on March 8, 2017 Features

Being a super recent Star Wars fan (I only watched the films for the first time in December 2015), I instantly fell in love with Princess Leia. The ultimate role model for women, the only female lead between two (frankly, quite whiney) men and unwavering in her commitment to the Resistance, she’s so much more than the sex slave in a gold bikini that Jabba the Hut reduced her to in the sixth film. Even though she eventually became Han Solo’s love interest, that wasn’t what defined her character and role in the films. 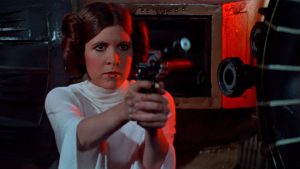 When we first meet Leia Organa, she’s a member of the Imperial Senate and a spy for the Rebel Alliance, trying to smuggle out the stolen plans of the Death Star. We see her distress signal sent to Obi-Wan Kenobi after Darth Vader kidnaps her. You would think she was a damsel in distress from this but she’s in fact from it; already having been on a mission herself to destroy the Death Star. She’s completely, unfailingly committed to the greater good and even when her home planet and everyone on it is destroyed because she refused to betray the Resistance, she still continues to defy conventional representations of women in films by staying strong. She isn’t just her looks, she isn’t someone’s girlfriend or wife, she isn’t the comic relief or sex icon, except for when she’s taken as a slave and saves herself by strangling Jabba with the chains that bound her.

Leia didn’t need protecting. She didn’t need anyone to speak for her. She wasn’t waiting to be saved by a man, for him to sweep her off of her feet. Han Solo wasn’t interested in rescuing her, and the fact that they fell for each other is a testament to her strong and feisty independence. Even in more recent films like The Hunger Games, there is still very much a romance as a prominent part of the film. Leia is, as Disney princesses go, realistic and strong, someone who wasn’t content with just being a princess but wanted the galaxy to change to the point where she got involved in politics and became the youngest Imperial senator ever at the age of 18. 18! And yet I know people in their twenties who aren’t sure if they’re registered to vote or not. When Obi-Wan et al. are captured and end up trapped and surrounded by stormtroopers, she rescues everyone with a rifle and rubbish chute because they were all unable to save themselves and “somebody has to save our skins.”

Throughout the films we see her complete loyalty. Not only is she dedicated enough to change in the galaxy that she defies her father, she is never tempted by the Dark Side (Anakin went to it just because his wife died, Luke was tempted and Ben Solo was just straight up evil). During The Force Awakens, after the news of Kylo Ren emerges, Han Solo has regressed to dodgy deals and cantinas and Luke is a hermit but Leia remains a leader. She supports herself- she was a symbol of strength within these stories that had always been aimed at males. Remember when J.J. Abrams said that Star Wars was a “boys thing”? While it absolutely did target males in the past, the current trilogy has had two, strong, badass female leads and the series is continuing to be more inclusive as the films go on. She’s also a really good shot with a blaster. 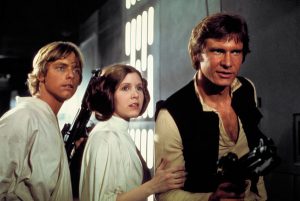 She was a breath of fresh air during the 80s and 90s in a film market oversaturated by women who are completely forgettable and only there to advance the plots of the male protagonists they’re normally in a relationship with. Sigourney Weaver was the hot one that Bill Murray kissed after he saved her in Ghostbusters. Jennifer, Marty’s girlfriend in Back to the Future is literally just there as a plot advancer for him to get home – and she’s replaced by another actress for the second and third films which shows how much the producers really cared about us caring about her. Against that, Carrie Fisher’s Leia was a soldier, unlike Luke and Han. Luke started as an idiot and became a hero, Han was a ass and grew up, and Leia was the one who kicked them into shape. They were boys. She was a woman.

While I think there needs to be more than one strong female, we need more films to pass the Bechdel test. The films really do suffer from the Smurfette Principle, and that the marketing for the films should have been something other than Leia as a sex object. Leia is a feisty, strong, brave woman and role model for everyone. She is idealised – we see a woman who is just as capable, if not more so, than the men who surround her. She’s badass, she has excellent one-liners, and all of this while being a woman in a society which expects women to be less than men. Less capable, less brave, less strong, less achieving. We need more women like Princess Leia.