Read more
You are at:Home»Features»The Appeal of the ‘Ordinary Star’
By Eleanor Joyce on March 3, 2017 Features

It is a truth universally acknowledged that Ed Sheeran is a national treasure. A homegrown talent who writes songs that we can all relate to, he’s put Suffolk on the map and ensured that ‘A Team’ will never stop playing on the radio. Ever. But what drives people to go to the next level, inspired to write articles like ’17 moments proving Ed Sheeran to be the most relatable person ever’? or get his face tattooed on themselves? I’d humbly suggest that there’s something endlessly appealing about celebrities who rocket to stardom without really having a clue how they ended up there. Stars like Rihanna and Beyonce seem so untouchably perfect that we have a hard time imagining them doing the things that us human beings do, like brushing their teeth or going to Five Guys. But what about the ‘ordinary stars’ who make the world a brighter place, if only for their Twitter posts?

In the case of everybody’s favourite boy next door Ed Sheeran, fans appreciate how hard he’s worked to get where he is, and that honesty and dedication shines through in his music. Songs like his latest release, ‘Castle on a Hill’, are the musical equivalent of wrapping you up in a blanket and giving you a big hug, as well as being basically a love song to Suffolk. As well as loving cats, tea and his home county of Suffolk, he’s frank about his success being down to hard work – the video for his first official song, ‘Addicted’, was a little pitchy and out of tune, but he’s openly shared the video to encourage young singers to improve and work on their voices. And there’s also his legendary Twitter account. There are too many highlights to go into in a relatively short space, so suffice to say that Ed makes the most of his new platform to tell everyone about food. I mean, he talks about food A LOT. Whether it’s his iconic love for ketchup or his photos with his cat Graham, Ed Sheeran is one of the few celebrities who’d be happy to go out for a pint with you, free of the pressure that many other famous faces are under to maintain their veneer of celebrity.

Another singer who engages with her fans on social media in a way that just makes everyone want to be her friend is Lorde, self-titled ‘Goth Girl’ and the talent behind hits like ‘Royals’ and ‘Team’. She’s got a Tumblr account that she regularly updates with posts that wouldn’t sound out of place from any twenty-something. She was super happy to learn that one of her fans named a cat after her, and couldn’t offer any advice to someone asking for selfie tips because ‘nobody cared about my selfies until I became famous’. On the subject of selfies, plenty of celebrities post photos of themselves, but Adele takes it up a level, sharing selfies from the gym and no make-up selfies to show that she doesn’t have time to look flawless every day. As well as hating her workouts, she admits to being able to eat a whole packet of cheese, burping all the time and not shaving her legs while on tour, retorting with her usual frankness that ‘I’ll have no man telling me to shave my fucking legs, shave yours!’ She’s actively rejected ‘the fame game’, saying in I.D. magazine that she’s frightened of fame destroying her – she makes an active effort to be Adele Adkins rather than ‘Adele’. 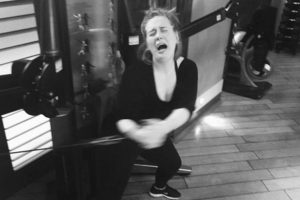 The appeal of ‘ordinary stars’, then, is basically that they remind us that they’re really not flawless aliens from Planet Fame. They got to where they are now based on a whole load of talent, but their way of dealing with it keeps them level-headed and totally honest about how much pressure fame can put you under – which is why tweets about ketchup keep us grounded and totally appreciative of how much hard work goes into creating music that everyone can relate to.