Read more
You are at:Home»Features»“It feels like 2000 again!”: A Q&A with Southampton’s Craig David
By James Barker on February 21, 2017 Features, Interviews

Southampton royalty Craig David was back in his hometown for a very special press conference yesterday (20/02/17), and The Edge were in attendance! He announced that he would be playing the Ageas Bowl (Southampton’s cricket ground) on Friday 1st September, to a potential audience of 50,000 – a true homecoming for a Southampton icon. In a room full of local media, Craig David spoke about his return to Southampton, the Brit Awards 2017, and being too old for all-nighters. 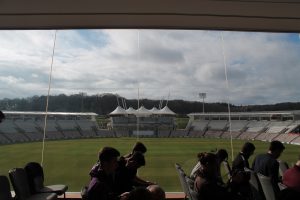 Seated in a shiny conference room above the Bowl itself, Craig announced the special performance, calling the venue “iconic”. “To be back in Southampton, that made me smile. I told my Mum a few days back, and she said ‘What!’. It just brings back amazing memories, every time I’m driving down the Avenue or I come off the M3… This is where everything started for me, a little kid with hopes and dreams living on the Holyrood estate. And sixteen years later I’m playing at the [Ageas] Bowl, to 50,000 people – it never becomes something I take for granted, or can ever be boring to me. I feel like that kid all over again, and it’s gonna be an incredible experience.”

Craig also spoke of his “incredible journey”, and how his Ageas Bowl performance comes at the perfect, matured time in his career. “It’s so cyclical in terms of how music comes around, there’s no guarantee whatsoever that you can come back and see two generations connect with your music. I’m ready to smash this out the park.” When questioned on whether his Southampton-based Mum would be attending the show, the singer wryly commented that she’d already been eyeing up one of the fancy on-site Hilton suites for the show. “I wanna make sure my family get to fully experience this,” he humbly noted; “It’s not about ‘look how cool I am, playing these huge events’. I just wanna come back and have everyone have a good time at my shows – if they have a good time, I’ll have a good time.”

“I feel every show I do is special to me. I try and bring something unique to each one. The TS5 element allows me to always freestyle it a little bit depending on how the crowd is, and I can lean it anyway as my playlist is open. We’ve always got extra songs in the bag, and I treat it like a DJ show – we’re always ready to go. This show will be epic.” When asked whether he’d be pulling an all-nighter after the show, Craig mused that he might just be a bit too old. “The way [my friends]would like it, I’m gonna be seeing the sunrise; though one thing I always told myself is that, if I was still seeing the sunrise at 35, something’s gone wrong! I’m gonna make the most of it, but burning the candle at both ends is something I’ll put to one side for the minute!” 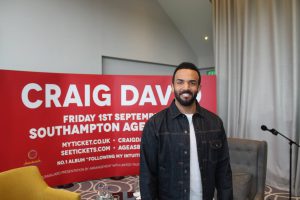 Talk turned to Craig David’s latest hit album, Following My Intuition, which was released last September to critical acclaim. “The story behind the album getting to Number 1 was what made it incredible. Growing up in Southampton, everything went so fast, and suddenly my life changed – I was able to travel the world, sell millions of records, number ones, and appear on all the TV shows you’ve grown up as watching as a kid, like Top of the Pops. Coming full circle for any aspiring singer-songwriter, even coming from a city outside of London like Southampton, says that anything’s possible. That epic story got me to where I am now. Being back here, it feels like 2000 all over again. Those ‘Number 1’s are fantastic to tell your mates or to have a couple of plaques on the wall, but what really matters is that I’m healthy and happy, my friends and family are around me, and that I have that enthusiasm still.”

The announcement comes mere days before the Brit Awards 2017, where Craig is up for Best Male, and when asked about the nomination, he took the opportunity to praise the rise of Grime in the music industry. “Being in a category with Kano and Skepta is amazing, because it shows that the Grime scene is having it’s moment in the same way Garage music had.” He also paid tribute to the late David Bowie. “If anyone deserves the award, it’s [him], because his legacy lives on through his music and continues to inspire. It’s just nice to be in the mix, but there’s a lot of other males that deserve to be in the category too. I’ll never let an award ceremony make you feel that if you win something, you actually are that, because that’s just the ego talking. We’re all talent, it’s not a competition.”

Despite acknowledging that his schedule is “filled up nicely” after the album’s success and subsequent touring, Craig even hinted that there might be another album on the way. “I like to think there’s a new record in the tail-end of [2017],” he grinned, still keeping things close to his chest. He closed the Q&A with a humorous nod to the Holyrood estate in Southampton where he grew up. “My dad guided me to music rather than aimlessly running around playing manhunt on the estate; why don’t people play manhunt anymore? You used to know when everyone was outside ’cause the bikes were in a pile somewhere; now it’s just like ‘I’ll play FIFA!'”.