Read more
You are at:Home»Features»“And I was like, what if the sun just doesn’t come up any more?”: An interview with Blair Witch writer, Simon Barrett
By Ash Millman on January 26, 2017 Features, Interviews

The Blair Witch Project‘s most recent sequel in 2016, Blair Witch, had a lot to live up to by name alone. Working under the secret title of ‘The Woods’ for a good portion of its creation, the film was revealed at Comic Con early last year – sending fans into overdrive at the thought of a franchise reboot. Helming the film’s release was director Adam Wingard and screenwriter Simon Barrett; the latter of which I managed to have a chat with about his experience both writing and making the film. 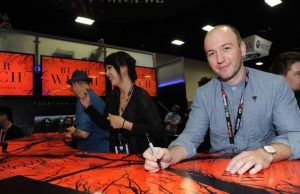 The duo have worked together numerous times, with standout horrors such as V/H/S (2012), V/H/S 2 (2013), You’re Next (2014), and The Guest (2014) already under their belts. Their collaboration on the latest venture into Burkittsville is exciting not only for their own innovative style together, but also for their experience with the found footage genre – the V/H/S series is a testament to their ability to deconstruct horror tropes. In any case, coming to the grandmother of the found footage genre is no easy feat to undertake, but its one that is carefully and intriguingly handled by the pair as the film unfolds; spinning between space, time, and some fantastic manipulation of modern media devices.

A sequel through and through, Barrett created a film that followed directly on from the original movie’s famous footsteps – with the brother of Heather Donahue, James (James McCune), heading into Black Hills forest in search of his missing sister. Discovering a tape online that comes from the very woods we watched Heather disappear into 18 years previously (found footage within found footage, if you will), Blair Witch aims to expand on the universe created by Daniel Myrick and Eduardo Sánchez created many moons ago. However, Barrett didn’t want to simply toy around with ideas that were already fleshed out: “Blair Witch was not an obvious choice, there was no clear ‘this is what you do with the new Blair Witch movie’ template. The first film was an experimental movie essentially and Book of Shadows was an experimental movie in a completely different way. So we had to decide what sort of sequel we wanted, and because the mythology of the Blair Witch Project itself is intricate but also unexplained – there’s still a lot left to be answered.”

Barrett attempts to tease these answers out through a number of scenes within the film – bringing back iconic moments from the original movie as well as adding his own ideas about what should, or could, be happening in the forest. Adding his own science-fiction twist to the source material, the updated version of the witch can manipulate time to her will – trapping campers in eternal night or making five days pass by in an instant. It’s one of the most creepy and genuinely frightening concepts of the film, and one that Barrett plays with throughout. Speaking of this step into another genre, he said: “I gave it a science-fiction subtext, which some people like and some people don’t. But I like it! I think it’s cool. Hopefully it added to the film and gave more for people to think about. The sci-fi concepts and the time shifting stuff and the more uniquely interesting aspects of the mythology that I hadn’t really seen people talk about a lot – I felt they were fun for us to explore.” Of melding this with the first film’s characteristics, he mused: “It’s very ambiguous in a lot of ways, but it has interesting sci-fi elements. Certainly to me it felt implied that it was extra-terrestrial. Even though the movie doesn’t spell it out, it’s obvious stuff is going on.” Whether supernatural or alien – it’s up to us to read into the film’s breadcrumb moments.

This inspiration for a more sci-fi witch seemingly came out of an epiphany, with Barrett having initial worries about the first conversations of what the film would look like: “The very first thing that alarmed me was that they were talking about filming a lot of scenes in daylight in the woods – and there’s no way that’s gonna be scary. The first film gets away with a lot as it feels 100% authentic and real, but we weren’t going to try to simulate that reality. We weren’t going to do an improvised film, we were doing a scripted, technical one with jump scares; and that was what we wanted to do and felt how the film should be. But that then meant being in broad daylight would at best feel kind of pretty, and at worst feel silly. It was a matter of how to avoid that – and I was like what if the sun just doesn’t come up any more?”

Whilst ideas were sparked and worked into the first draft seamlessly, attempting to film the finished screenplay proved harder than what appears on screen. Interestingly, Wingard and Barrett opted to make “a point of view horror, influenced by video games and virtual reality rather than characters holding cameras” – which meant changing up how they filmed their scenes. Taking note of other movies that practiced Barrett’s initial ideas for filming, he noted: “There’s been a few films that have done that sort of thing, like As Above So Below, and the UK’s The Borderlands – so a few films that had done the kind of thing that I’d written and I liked it and had seen that it worked.” 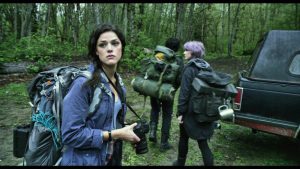 “The actors are not actually using the cameras. You never see a camera on screen that is actually working – every time you see a prop camera and then we’re getting the angle with a totally different camera. Once you get it from one angle, you have to change everything and get it from every other possible camera that would be in the scene – which was a lot. We wanted all those editing options as that was the style of the film we were going for but it just took so much longer and was so much more challenging. The sun was coming up and ruining our scenes!”

These challenges on set were accentuated by pressures outside of filming also: “When the film was finally announced, there was some kind of initial backlash against Adam and myself. Because I think up until this film we were seen as purely indie filmmakers that purely made films that were based on my original stories and ideas.” Proving themselves as a studio worthy team has definitely shone through in Blair Witch however, with Barrett tackling the preconceptions of the franchise and its fans head on.

“The hard part about writing the script was that this was my first studio film that I’ve ever written. It’s the first time I’ve ever worked with a property that has preconceived notions of what people would want from it. When Hollywood makes these superhero movies or adaptations or remakes or reboots of classic films – you see that no one makes any interesting creative decisions. That’s because they’re terrified to. It can be creatively paralysing. I can’t imagine the weird pressure people feel of ‘okay, if I don’t do this well I’m disappointing the studio and I’m disappointing the fans and I’m disappointing the original filmmakers.’ It’s just a completely different process to what I’ve been used to.”

Taking no leaves from Hollywood’s book, Barrett’s Blair Witch is riddled with his own thoughts and conceptions of what the monster in the woods can be – a refreshing look into a franchise that has long since been put to bed. Exploring facets only hinted at in the original and clearly doing his research, he has crafted a story that that is as interesting to watch on its own as it is to revisit Heather’s footsteps of the 1999 classic. Bringing back the horrors of the Blair Witch mythology to a whole new audience, Barrett and Wingard have created something truly their own, and truly terrifying in the process.

Blair Witch, directed by Adam Wingard, is released on Blu-Ray and DVD in the UK through Lionsgate Home Entertainment. Certificate 15.