Hailing from Chester, Idle Frets have been taking the country by storm following their recent UK tour. The indie quartet – Ben Davies, Erin Gibson, Dave Hennessy and Luke Lewis – are graduates of Sir Paul McCartney’s prestigious Liverpool Insitute of Performing Arts and this month saw them release their latest song, ‘Glow’, to an eagerly awaiting (and rapidly expanding) national and international fan-base that can only get bigger.

In the past Idle Frets have played support for the likes of The 1975, Catfish and The Bottlemen, and Blossoms. As well as this, they’ve appeared at Glastonbury and their success looks set to continue following their UK tour. They’re clearly following in the footsteps of their fellow LIPA alumni and, having listened to their newly released track ‘Glow’ it sounds like they’re on to a winning combination. 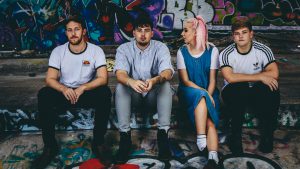 Taking inspiration from the likes of Catfish and The Bottlemen, Sundara Karma and Peace, they have an alt-rock indie sound with layered synths, a beat that won’t quit and Nile Rogers referencing guitar riffs. Idle Frets front man, Ben Davies, says: “In terms of our sound, it’s a question we really don’t like to answer and we never know what to say – we’ve always seemed to slip into saying we’re an indie rock band, but it’s more textural than that, especially with the new outfit, a really different and fresh sound.” Just listening to their range of already released tracks, you can definitely hear exactly what Davies is referring to as they oscillate between different tones and moods. Davies goes on to add, “We like to write honest songs about things the average listener can get – something people can understand and connect with.”

Their latest single, ‘Glow’, really shows off their range as they build from an almost darkly atmospheric introduction to their multi-layered and textured chorus with climactic drums and a deep guitar riff with emotional lyrics telling of love lost and unrequited – ‘I don’t even miss her.’ It’s emotional and textured and you’ll find yourself playing their songs on repeat before you know it. ‘Glow’ is definitely Idle Frets’ best track yet and it demonstrates their potential to go far following an incredibly promising start.

Idle Frets’ new single, ‘Glow’, was released December 9th, 2016 and is now out and available for purchase. You can listen to their new song now on Spotify and SoundCloud.