Read more
You are at:Home»Features»A reflection on the Films of Hayao Miyazaki
By Leo Donlan on December 27, 2016 Features

The forty-year film career of Japanese animator and Studio Ghibli founding member Hayao Miyazaki has given birth to some amazing worlds. Awe-inspiring in an amazing variety of scale: from the small and intimate spaces of Arietty (2010) and Ponyo (2008), to the massive epics Howl’s Moving Castle (2004) and Laputa: Castle in the Sky (1986); from the fantastical worlds of Spirited Away (2001) and Princess Mononoke (1995), to the historical biography The Wind Rises (2013). His films have been honoured by countless awards around the world and in 2001 Spirited Away became the first and only Japanese anime to have won the Academy Award for Best Animated Feature.

In September 2013, following the release of the Oscar-nominated The Wind Rises, Miyazaki announced (for the sixth time) that he would be entering ‘serious’ retirement from feature making. Less than a year later Studio Ghibli announced they would suspend feature filmmaking altogether. Dark days. Much to the glee of Western Ghiblites (Ghiblians?) Western releases of final Ghibli features The Tale of the Princess Kaguya (2014), and When Marnie Was There (2015), and the Ghibli co-produced The Red Turtle (2016), have tided us over since those solemn announcements. But our dormant gluttony is going to be satisfied once more as Miyazaki announced last week that he will be exiting retirement for one final feature. Boro the Caterpillar, reportedly a pet-project of his for the last twenty years is being proposed for feature-length production. 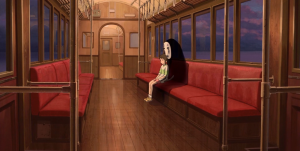 Chihiro and No-Face take the train in Spirited Away (2001)

Miyazaki was born in Tokyo in 1941 – his father Katsuji’s business, Miyazaki Airplane, manufactured parts for aircrafts including WWII fighter planes. The family relocated during the war before moving back to Tokyo where Miyazaki attended high school and university. After graduating in 1963, Miyazaki worked at Toei Animation where he met Isao Takahata, who would become his longest collaborator and co-founder of production company, Studio Ghibli in 1985.

Unlike Takahata, whose films tend to be more subdued stories about human relationships, usually based in the real word (see 1988’s Grave of the Fireflies and 1991’s Only Yesterday), Miyazaki’s most famous films are based in vivid fantasy. Some are like traditional or modernised Japanese fables, others like European-inspired fairy tales. They are set in stunningly beautiful, hand-painted worlds full of fecund flora, mythological characters and spirits from Japanese folklore – into which is often thrust a young human girl or boy, an alien, as the protagonist. Like Lewis Carroll’s Alice, they fall through these perilous places, alone in an adult world by which they are absolutely dwarfed.

The beauty of the backgrounds, design, and animation in these films cannot be overstated – they are absolutely stunning in every example, and I would happily attempt to stand by Miyazaki being the definitive animator of all time. However, despite the traditionalisms and multi-coloured menageries that have spawned a thousand toy lines and teenage obsessions, one of the most affecting aspects of these films is often the more subtle moments of modern humanity. In Spirited Away (2001), ten-year old city girl Chihiro finds herself forced into labour in a bathhouse visited by kami (spirits and gods). Typically, she transforms from a bratty child into someone a bit handier with responsibility and must face various obstacles including the hoary-nosed, witch proprietor. The really transporting moments though, and certainly my favourite, are when she leaves the bathhouse. She takes a train across an ocean in the dark – silent neon signs pass the windows and dark, translucent workmen with hats and jackets shuffle their newspapers. It’s a very unwanted reminder of the real world’s existence, especially so close to such an explosive fantasy realm – like Chihiro, and the viewer, have to face the subtler, lonelier mysticism of the everyday adult world. Like many Ghibli films it pangs with inexplicable nostalgia – an effect helped in no small way by a soar in the score by frequent collaborator Joe Hisaishi, who has scored all of Miyazaki’s Studio Ghibli features.

In a 2002 interview Roger Ebert remarked to Miyazaki about these moments of stillness, shots of characters looking out of windows or just sitting, with little bearing on the story. He replied:

“We have a word for that in Japanese,” he said. “It’s called ma. Emptiness. It’s there intentionally.” He clapped his hands three or four times. “The time in between my clapping is ma. If you just have non-stop action with no breathing space at all, it’s just busyness, But if you take a moment, then the tension building in the film can grow into a wider dimension. If you just have constant tension at 80 degrees all the time you just get numb.”

A lot of Miyazaki’s films are conspicuously concerned with the somewhat turbulent relationship between man and nature. Accordingly with traditional Japanese Shinto beliefs, the natural world is personified by spirits and deities in Nausicaa Of The Valley Of The Wind (1984), Princess Mononoke (1997) and Ponyo (2008) – and often they and the nature they represent is visibly disturbed by humanity. This is at the heart of films like Laputa, Nausicaa and particularly Princess Mononoke, in which the spirits of a forest clash with a town harvesting its resources for their survival. Human rubbish and waste, or smoke-spewing industrial machinery is usually juxtaposed with great spaces of natural beauty, such as lakes, the sea, forests and mountains, and the sky. 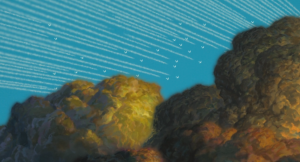 Not necessarily ecologically speaking, the man-nature relationship is also explored in Miyazaki’s fascination with machinery and particularly flight – being brought up around his father’s business clearly inspired a lifelong fascination. Flight is obviously the original, unattainable feat to humans, and with the flying machine that limit is broken but never quite achieved as in nature– Miyazaki plays with this idea in his films. At one moment they are lovely, whimsical images, animated into beautifully gentle motion, just as at home in the sky as the gulls that flank Nasicaa’s glider, or the paper planes in Spirited Away or The Wind Rises – the next moment they are colossal, creaking warships raining fire and looking like they’re about to fall out of the air, just kept afloat by flapping insect-like wings. It never feels entirely certain whether they belong up there.

He fully realises this theme in The Wind Rises: Miyazaki’s last film of 2013, the fictionalised story of the real Jiro Horikochi- a brilliant designer of Japanese fighter planes during WWII. In his dreams as a child, he flies a gull-like plane around the rolling countryside, but even in youth is haunted by their potential for weaponisation when through the clouds breaks a great steel torpedo, branded with an Iron Cross, dangling hundreds of throbbing bombs from its fuselage. Then again, of the planes feel even more organic in the film due to much of the spluttering, whirring engine sounds being recorded with human voices – where man-made technology, man and nature are separated becomes increasingly unclear. 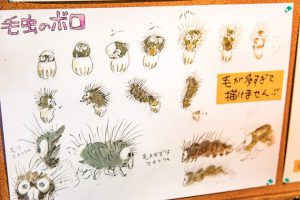 Boro The Caterpillar, was originally a short, CGI, film (Miyazaki and Ghibli’s first) for the Studio Ghibli Museum in Mitaka, Tokyo. But Miyazaki was apparently unsatisfied and has proposed expanding it to feature length, hinting at possible completion by 2019. Presumably it will be a little less politically readable than some, but we can certainly expect a natural setting, and perhaps even some metamorphic flight sequences from this friendly dude.

We asked other Edge writers to comment on the Miyazaki films have had the most profound effect on them:

Jordan MacPhee Torres:
“I’ve always been struck by the allure of Porco Rosso. The setting of the Adriatic had this strange mysticism about it, and though its historical setting is one we come to know as harsh, it established an almost innocent and fanciful sentiment within it.”

Lois Saia:
“Whilst the bones of Howl’s Moving Castle may not be Miyazaki’s he masterfully fleshes out and breathes new life into his adaptation. The worlds of the film, whilst based on reality become fantastical and filled with delight and the characters which move through them, both fair and foul burst with life and vibrancy beyond their two dimensional form.”