Sweet Tempest are a Danish dream-pop duo made up of Julian and Luna, two talented friends who draw their musical inspiration from the adventurous aspects of everyday life. Luna has lent her unique voice to several artists, musicians and genres before collaborating with Julian, who has also produced and written songs for theatre and film during his career. Their style is nostalgic, compassionate and lyrically rich, and they conceived of their first song, ‘Never Break’, as a result of many glasses of whiskey, cups of coffee and long Scandinavian nights after Julian moved into Luna’s apartment. 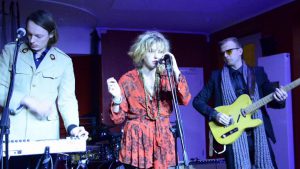 Beginning their musical journey together in 2013, they released their first EP, Snow, made up of five songs – all beautiful, softly focused reflections on the world, that form a story in their own right. ‘Snow’, the titular track, is a catchy homage to a lucid dream, while ‘The Truth’ is gentler and more loving than ‘My Boulder’, a harsher sounding track to contrast with ‘Never Break’ and ‘Monsters Under the Bed’, both breathy, rich narratives with an otherworldly quality. The whole album is incredibly easy listening, at odds with the obvious effort that the duo have put into writing, producing and mixing their tracks.

Playing at festivals and gigs up and down Denmark, their music lacks the exposure that it really deserves – they perfectly encapsulate their gauzy vignettes about life into each song, providing a feast of lyrical flourishes to sample in the process. Their guitar-heavy, distorted single ‘Mine’ featured on Nicolas Winding Refn’s The Neon Demon soundtrack, a departure from their usual sound while still retaining their subtle musicality and having the potential to appeal to listeners who aren’t fans of the acoustic. Their new single ‘Empty Box’ marks a return to their more liquid tone, and is simply out of this world – the production quality is slick, the arrangement is more complex, and Luna’s cloudy vocals are on point as always. Whether you’re new to the soundscapes of dream-pop or a veteran listener, Sweet Tempest are bound to surprise you.

Listen to their music on Soundcloud or Spotify, and watch their music video for ‘The Truth’ below.