Read more
You are at:Home»Features»Steve Harrington and the art of the perfect minor character arc
By Rehana Nurmahi on December 9, 2016 Features

So last week, I finally finished watching Season 1 of Stranger Things. *Cue the applause*. Yes, I admit that it took me rather a while to watch it, and that I’m months behind the rest of the world. However, the series did still captivate me in the same way as those who binged it all on the day of release.

When it comes to the appeal of the show, a lot of it comes from its perfect encapsulation of 80s movies of that genre, and one of the ways it does this is through its initial introduction of characters that follow all the standard tropes: group of misfit kids; disinterested parents; good girl older sister; rebel boyfriend; city cop in a deadbeat town, etc. etc. The thing that Stranger Things does however, and something it does rather well, is that it subverts all these tropes so that they aren’t as typical and expected as you’re led to believe at the start. Possibly my favourite example of this is the character of Steve Harrington (Joe Keery). 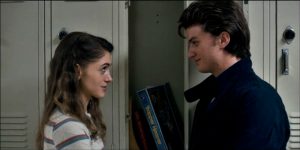 Steve is the boyfriend of Nancy (Natalia Dyer)- the main protagonist’s sister. He’s one of those kids who is too cool for school, and really we don’t think that there’s many reasons for him wanting to be with Nancy other than she’s hot and he wants to sleep with her. Then there’s that moment in the first episode, after Nancy berates him for trying to sleep with her, that he continues to help her study, and that moment was a refreshing surprise to be honest. It was the moment that you began to think, “Oh. Maybe he’s not going to abide by the trope’s rules”.

Then as the series goes on, he does seem to be a bit more conventional. He’s a bit of a tool, and as each episode goes on, you lose faith in him. As Nancy gets closer to Jonathan (Charlie Heaton), Steve doesn’t deal too well with it, and he and his awful friends retaliate in a way that makes you shake your head in disappointment. However, by the end of the series, Steve is given a chance at redemption, stepping in to help overcome the Demi-gorgon, and at the end it’s shown that Nancy and Steve are still going strong, despite the previous hints of a romance between Nancy and Jonathan. He makes us love him again, and not just for his ridiculously good hair.

The question is then: what’s so special about Steve Harrington? The answer is: nothing. Nothing. Nada. Zilch. So why is that I have so much love for this character and his arc? Well, it’s precisely the fact that Steve isn’t anything special- he’s an ordinary human. He doesn’t get everything right, but he also doesn’t get everything wrong. He’s a young person who gives into peer pressure sometimes, but sees error in his ways, and does what he can to make up for those mistakes. 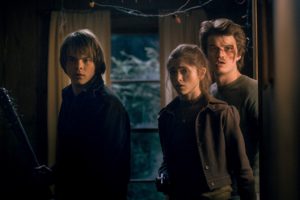 This shouldn’t be so refreshing to see on our television screens, and yet it feels that way, especially on a show like Stranger Things. There’s such a need in our culture, and in our media particularly, to make sure that the good guys and bad guys are marked as such, and they are marked distinctively. However, when is the line ever that clear cut? “The world isn’t split into good people and Death Eaters” after all! There doesn’t seem to be as much room for these grey areas on TV though.

This is why I think Steve is such a great example of a well written character arc. What with the suggestions of Nancy and Jonathan becoming romantically involved, as well as his detachment from the supernatural element of the show, it would have been easy to write Steve out when he fought Jonathan. However, the writers don’t choose to do that, they actually choose to have him stand up to his horrible friends and try to make things right with both Nancy and Jonathan. Steve isn’t just some tool- he’s a guy with a good heart who makes bad decisions. Isn’t that what most teenagers are?

It can be so tempting as a writer to not give as much attention to minor characters on a show, especially when you have such a rounded host of leads. However, the writers of Stranger Things did not give in to this temptation and I can only be grateful to them for that.

Steve Harrington is a real, flawed, human character, and that is why his arc is perfect. I hope that we get to see more characters like him in this wonderful era for television.