Frida Sundemo is a Swedish-born singer with an ethereal voice and futuristic sound that has firmly placed her in the ranks of the already transcendent Scandinavian music scene. Despite her appearances in the film Kill Your Friends and her prolific songwriting, she is remarkably mysterious. Her Twitter feed is positively alight with supportive messages and new music announcements (interspersed with adorably enthusiastic support for Sunderland FC), but her success is by no means a recent phenomenon, as Frida is perhaps one of Scandinavia’s best kept secrets. 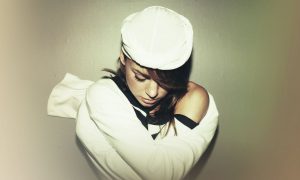 She began making music with her debut album in 2010 – Dear, Let It Out. The album began with ‘Towers’, ‘I Was Surrounded’ and title track ‘Dear, Let It Out’, all of which feature her distinctively pure voice and synth-heavy melodies. Frida described her own music in an interview with Celeb Mix as ‘cinematic, melodic and intimate’, which can certainly be seen in her 2013 Indigo EP, an album full of exquisite contrasts – ‘Snow’ features melancholic lyrics that turn almost whimsical at times, ‘Indigo’ is breezy yet bittersweet whilst exploring the theme of persevering your dreams, and ‘Jaguar’ is hugely catchy and euphoric. Her other tracks are equally stellar, and the Indigo EP led to Frida supporting Charlie XCX in June, featuring on fellow Swede Rasmus Faber’s ‘Indian Summer’, and releasing several more gorgeous singles. ‘A Million Years’ creates the same trademark balance between happy and sad with a minimalist white-background music video, and ‘For You, Love’ lived up to its wintry December release with a more glacial tone than her previous work.

Her next big release was the Lit Up By Neon EP in 2014, the entire album playing like a vocally acrobatic fairytale, and Frida has been releasing single after single into 2015, attracting a wider fan base through ‘Keep An Eye On Me’ being featured on the hit show Grey’s Anatomy and ‘You’ appearing on horror-comedy Scream Queens. Her voice is endlessly remixable because of her unique sound and pure quality, and her remix of ‘Beautiful Heartbeat’ by Morten featuring her own vocal talents, has gained over eight million plays on Spotify. Now signed to Cosmos Music, her latest track is ‘We Are Dreamers’, a triumphant teaser for her highly anticipated next album due next year, and it promises to be another well-crafted electro-pop masterpiece.

Watch Frida’s new lyric video for ‘We Are Dreamers’, which is out now, below, and find her music on Spotify and Soundcloud. To see the other artists The Edge have introduced this year, check out our Spotify playlist.