Read more
You are at:Home»Features»How important is chemistry between TV presenters?
By Eleanor Joyce on November 27, 2016 Features 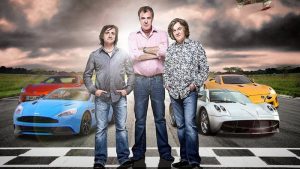 The huge success of Amazon’s new series The Grand Tour has raised more than a few eyebrows among viewers after the controversy surrounding Top Gear co-host Jeremy Clarkson and his spat with the BBC, especially when coupled with Chris Evans and Matt LeBlanc’s new season of the show floundering without its old presenters. Amazon have bought into the tried-and-tested Top Gear formula, but this time they’ve pumped it up with considerably more cash to fuel the shenanigans of screen stalwarts Clarkson, Richard Hammond and James May. But how many people tune in to shows like The Grand Tour to find out about the intricate workings of an engine compared to those who simply enjoy watching three grown men behave like twelve-year-olds? How important is this chemistry between presenters? Does it really make a difference to audiences? 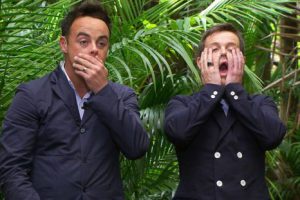 Perhaps the most iconic presenting team is Ant and Dec, the loveable Geordie duo who have been the face of shows including Pop Idol, Britain’s Got Talent, I’m a Celebrity… Get Me Out Of Here and Saturday Night Takeaway. Named the eighteenth most influential people in British culture back in 2004, their friendship off-screen began way back in 1989 during their stint on children’s TV show Byker Grove, where they became firm friends over their mutual love of Newcastle United. These days, they live three doors down from each other in London, they were each others’ best man at their weddings – and bizarrely, they’ve even taken out insurance against the other dying. They mess up their lines and make each other genuinely laugh on screen. Their daytime TV colleagues Philip Schofield and Holly Willoughby follow in the same vein; their easy camaraderie on This Morning has led to dozens of YouTube clips of their laughing fits and tangential conversations. Friends for seven years and presenters on This Morning for five of those, Philip and Holly admitted in the Daily Mail that their relationship is in many ways like a marriage, and there’s little that they don’t know about each other. Both pairs of presenters have become synonymous with British television, and that’s in no small part down to their real-life friendships resonating with viewers. 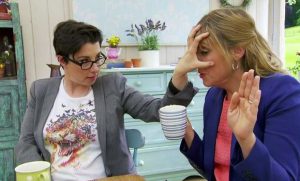 A more recent addition to the TV hall of fame is the inimitable Mel and Sue, until recently the presenters of the Great British Bake Off. Their famous baking innuendos and terrible one-liners have endeared them to the nation as part of the Bake Off craze.They began presenting the show in 2010, but they’ve been friends for 27 years since they crossed paths at Cambridge University as part of the Footlights comedy group. The first TV show that they presented together was Channel 4’s Light Lunch in 1997, yet their real fan following began with Bake Off, where they have such a great relationship with each other and with the bakers in the tent, reassuring them when the pressure gets too much, and also sampling their delicious bakes… The pair have admitted that they never thought that the format of a baking show would work, and that they initially signed up to pay the bills – but it seems that they’re a winning combination, as this year’s final drew in a record 14.8 million viewers. 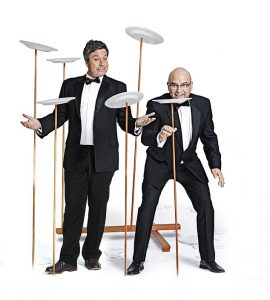 Another foodie duo who are integral to the success of a cookery show are Greg Wallace and John Torode, the hosts and judges of Masterchef. Since the show was revamped in 2005, it’s been on our screens throughout the year with spin-off shows Masterchef: The Professionals and Celebrity Masterchef. Aside from judging buttery biscuit bases, the pair’s bromance makes for an entertaining show, with Greg’s renowned love of desserts playfully exasperating his fellow judge and making them both beloved by the nation. They first met when John arrived in the UK from Australia, where Greg was offering his services as a vegetable supplier for the Chelsea restaurant John worked at, and they remained in touch until they reconnected through the Masterchef auditions. Once again, neither of them expected the success of the show to be quite as enduring as it has been, and their chemistry off-screen has translated into a recipe for success in the ratings and further Masterchef conquests in America, Australia and New Zealand.

There will always be some presenters who just don’t gel with their colleagues, and this has made for some awkward scenes that audiences aren’t afraid to call them out on. The new series of Top Gear made a lot of veteran viewers switch off because they simply didn’t enjoy the lack of chemistry between the inauthentic Chris Evans and cheesy Matt LeBlanc, leaving the show with its lowest ratings in ten years. Other presenting flops include James Martin and Anita Rani filling in for Philip and Holly on This Morning in July this year, being branded ‘wooden’ and ‘unwatchable’ by the Daily Mirror and hurriedly replaced by the effervescent X Factor alumnus Rylan Clark-Neal and his husband Dan. Similar ‘manufactured’ pairs of presenters like Vernon Kay and Gaby Logan on Splash! have failed to appeal to viewers largely because they’ve been matched due to their popularity as individuals, but they never quite achieve the same level of good humour and just plain silliness like the unique brand The Grand Tour‘s three amigos can carry off without a hitch.