Read more
You are at:Home»Features»Progress on the Small Screen: Is an all-female directing team a good thing?
By Alice Johannessen on November 25, 2016 Features

In late October, Executive Producer Melissa Rosenberg announced that all 13 episodes of the second season of Marvel’s Jessica Jones would have women directing. Such a decision follows the trend established by BBC’s Call the Midwife and Ava DuVernay’s Queen Sugar. But why is such a bold move necessary? Is employing an all female directing team a good thing?

The Centre for the Study of Women in Television & Film conducted a study on the number of women on and off the television screen and found that women comprised only 12% of directors working on broadcast network programs in the last year. These figures are a far cry from the progressive and diverse image Hollywood likes to project. You’ll remember the Oscars being #sowhite for the last 2 years. In fact the Oscar nominees as a whole can be described in three words: male, stale and pale. In the award show’s 88-year history, only four female filmmakers have been nominated for Best Director, with Kathryn Bigelow being the first (and only) of those to be given the prize, for 2008’s The Hurt Locker. 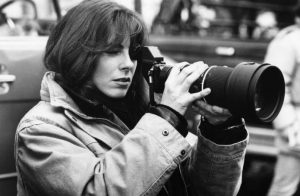 You may be thinking, it’s 2016: how on earth is this still a problem? Surely we are past the era of overt workplace sexism? Is there an office full of white men in black suits in a tall tower in Hollywood scheming to prevent women from directing big budget films? Of course it’s not as explicit as that. The sexism is much more subtle and institutionalized, grounded in gender stereotypes.

Martha Coolidge, the first woman president of the Directors Guild of America, has heard all the stories, claims and excuses: “no woman over 40 could possibly have the stamina to direct a feature film. I’ve heard people say that the kind of films they want to make are too big, too tough for a female director.” Manohla Dargis argues, “The reluctance to hire women seems symptomatic of a conservative, fear-driven industry that recycles the same genres, stereotypes, and impoverished ideas year after year. So, exactly like the outside world, the movie business clings to dusty stereotypes.” In an era where movie studios always go for reboots over risk, it is hardly surprising that it is on the small screen where the real progress is being made.

For Melissa Rosenberg, hiring entirely women for the second season of Jessica Jones was “a conscious decision”. Similarly creator of Queen Sugar, Ava DuVernay made a deliberate effort. The decision is an extension of ARRAY – an independent distributor that DuVernay founded in 2010. As the company’s website outlines, they work “to the amplification of independent films by people of colour and women filmmakers globally”. Here are two examples of women in positions of power using that privilege to amplify the voices of other women. Such an occurrence is not unusual. The same study by the Centre for the Study of Women in Television and Film found that on programmes with at least one female creator, women accounted for 26% of directors. On programmes with exclusively male creators, women comprised of only 8%.

Tina Mabry, who directed two episodes for Queen Sugar, has said, “People tell me this show – a female-led and minority-led show – is a unicorn. But for me, the goal now is that this not be a unicorn. Let’s tear off the damn horn and make it a horse.” We are often unaware of the lack of progress that has been made. This is largely due to Hollywood’s tendency to applaud and idolize the one or two figures that made it through the glass ceiling instead of bringing the whole thing down. Ava DuVernay shares her frustration in being used as one of these figures, “There needs to be more done than applauding one or two people who make it through your door.” Indeed Hollywood is very good at applauding itself as expressed by Jimmy Kimmel in his monologue for the Emmys, “Here in Hollywood the only thing we value more than diversity, is congratulating ourselves on how much we value diversity.”  The most refreshing thing about the decisions made by DuVernay and Rosenberg is that it has moved past panels, discussions, hashtags and into some tangible change.

But why is it important to have a more equal representation of women directors? Or diverse filmmakers in general? The answer is simple. It makes better TV and film. The Centre’s study found that with female directors, programmes are more likely to feature women in major parts and as complex characters. It makes sense that if you want multi-dimensional roles for women, avoiding stereotypes we have too often seen; you get women themselves to create them. This can be seen in the brilliant, flawed women in Call the Midwife, Jessica Jones and Queen Sugar. Having more female directors even has a financial benefit. The online movie-financing platform Slated analysed 1591 films released from 2010-2015 and found that movies with women in key roles behind the camera tend to make more money even though they are rarer and have smaller budgets.

Many people feel uncomfortable with positive discrimination of this kind. Such a deliberate effort for diversity is rarely without backlash. However Oprah Winfrey notes that ‘diversity’ is not the correct term but rather ‘inclusion’ should be preferred. “The word that articulates what we’re looking for is what we want to be: included. It’s to have a seat at the table where the decisions are being made”. An all-female directing team is not diversifying for the sake of it. It’s opening the door for women to take their seat at the table they have earned.

Let’s tear off the damn horn and make it a horse.