Read more
You are at:Home»Features»“I don’t think I am famous” – An interview with GBBO’s Selasi Gbormittah
By Anneka Honeyball and Carly-May Kavanagh on November 20, 2016 Features, Interviews

At his recent appearance at The Stags for Flamingo’s Hawaiian Launch Party, we were lucky enough to catch up with everybody’s favourite super chill baker, Selasi Gbormittah.

After gaining nationwide recognition as a contestant on The Great British Bake Off this year (in which he finished in fourth place, narrowly missing out on the grand final), Selasi followed up his debut in This Morning’s kitchen with a trip to our humble student pub for Flamingo’s Hawaiian Launch Party; meeting, greeting and icing biscuits for the night’s punters (including our Deputy Editor, Ashleigh). 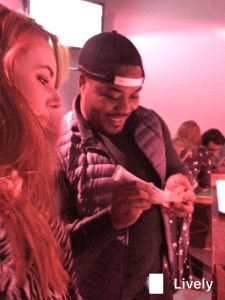 Donning a flipped back cap and body warmer and looking effortlessly cool as he casually leaned across a chair, Selasi revealed that this wasn’t his first time in Southampton, as he’s actually lived here before in Ocean Village. When asked about Southampton’s night life, Selasi cited that “Bedford Place and Buddha Lounge” were the best places in town, before quickly interjecting that his alma mater, Nottingham was the best.

Given his heartthrob status on Twitter, we wondered how the banker and motorbike enthusiast was adjusting to his newfound fame and recognition. Of course, as we perhaps should have expected, he was very chilled about it. “I don’t think I am famous to be honest. I went on the show to have fun and I did and now life goes on. It doesn’t really bother me, I still see my friends and go out.”

Despite his protestations, we were still curious about his level of fame, going so far as to ask him who he would want to play him in a film based on his life and Bake Off experiences. His answer? “One of my friends? Someone who actually knows me and can do it properly.”

The 30 year old, who is also reported to be working on getting his own bakery, also revealed that his baking playlist of music to cook to varied from bake to bake. “I have quite a weird playlist. I like all sorts, R’n’B, Rap, Pop. It depends on the bake. If I was cooking a sponge, I’d go more old school.”

In the last few precious seconds we had with the Bake Off star, we asked the ultimate question: ‘How do you pronounce the words ‘scones’? Is it “s-cons” or “s-cones?” To our great joy, it turned out Selasi was a “s-con” kind of guy, but he agreed with us that Mary Berry was probably more of a “s-cone-r.”

Check out Selasi’s appearance on This Morning, as well as his boozy Christmas cake recipe, in the video below.