Read more
You are at:Home»Features»US Election Special: Why Dr. Doom should be President of the United States
By Rob Tucker on November 2, 2016 Features

So, a Marvel supervillain might not seem like the obvious choice for the next President – Dr. Doom is pretty much Kim Jong-un with magic – but hear me out with this one. I truly believe that Doom has the necessary experience, leadership qualities and downright power to be President of the USA. Here’s why…

When he’s not busy battling the Avengers, Dr. Doom spends his time ruling Latveria, a (fictional) nation which he runs as the absolute monarch. Here, there is no legislature: the word of Doom simply is the law, and any who dare challenge him are wiped out. Let’s assume, therefore, that he would stand as an independent – partisan politics means nothing to Doom – which would immediately solve America’s current problem with Congress never getting anything done. In fact, Doom would probably just destroy Congress, to make sure they couldn’t possibly oppose him. Sounds like a bad President so far, but bear in mind that, thanks to Doom, Latveria is free from any disease, crime or poverty, and his scientific genius has made the tiny nation a superpower in the Marvel world. True, the people of Latveria live in fear of their monarch, but as long as they don’t criticise him, they are well cared for and everyone’s quality of life there is good. 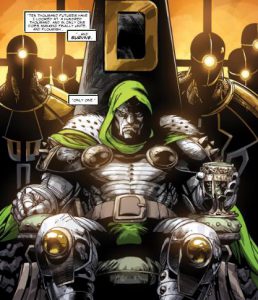 It may sound crazy that I’m actually supporting a totalitarian dictator-like character’s presidential bid, but when we compare Dr. Doom to America’s leading candidates in this year’s election, he would (somewhat worryingly) have a pretty good chance at winning. Like Trump, Doom believes himself to be one of the most powerful, skillful and intelligent people on the planet – the difference being that Doom, well, actually is. His armoured suit and magical powers make him nearly invincible; he could, therefore, defend the nation almost single-handedly, and would crush terrorism in one fell swoop. He’s also the antithesis of a career politician: nothing that Doom does is for personal gain, as his sole aim is to protect humanity by uniting the world under him. Would Hillary Clinton kill millions to save billions? I doubt it. Doom, on the other hand, wouldn’t bat a metal eyelid. He is completely incorruptible; his willpower is unbreakable; he is never motivated by greed. His methods may be appalling, but Dr. Doom is really the most honest and pure politician imaginable.

Furthermore, in one storyline, Doom allowed himself to be judged before a Panther God, who looked into thousands of possible futures and saw that the only one in which mankind survives is when Doom rules the world. In this future, there is universal education; no wars; no famine; no inequality of any kind. Which sounds a heck of a lot better than what the Republicans and Democrats are offering. He was judged to be pure of heart, because every action that Doom takes, however evil, is for the singular purpose of ensuring that this future comes to pass. So, really, he’s over-qualified for the job of President – he should really look into ‘Ruler of the world’ nominations. Hell, I’d vote for him. Of course, the USA would basically become a dictatorship overnight, and any friendship groups calling themselves the Fantastic Four should probably start worrying. But hey, look on the bright side: Dr. Doom really would make America great again.