Twin Wild have just released their new EP – and it’s a force to be reckoned with. My Heart is a triumph, a musical dreamscape with intelligent lyrics and undeniable confidence. It has been listened to over 150,000 times on Spotify already and marks the beginning of something special for the YNot, Great Escape and Isle of Wight Reunion Festival alumni. The titular track is an eclectic mixture of Richard Hutchison’s soft vocals and the instrumental talents of Imran Mair, David Cuzner and Edward Thomas, reflecting the struggles and the rewards that come with chasing your ambitions. “It’s that never ending beat, cause there’s only one thing that my heart is set on”, Hutchison murmurs, and that never ending beat is partly what makes the song so catchy and instantly memorable, courtesy of Mair’s sharp rhythms.

‘Willow Tree’ is a different beast that still retains the band’s pop-rock sound: the relentless track encourages the listener to embrace the ‘endless ocean’ and ‘open road’ of opportunities available in life, while the twang of the guitar riff  with themes about superficiality and the perils of being fake are the real star of ‘Superstar’. The stand-out feature for me is definitely ‘Interlude’, however – sitting between ‘Superstar’ and ‘Willow Tree’ at a shorter length of one minute and fifty-two seconds,  the ambient guitar sounds really help the listener to immerse more fully in the feel of the album, and take a breather among some of the more taut, snarling songs. 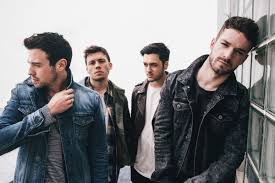 Their musical style has matured since their debut work ‘Fears’, which has been around since 2014, and at the time of writing has achieved a staggering 348,478 plays on Spotify and was played on Radio 1’s Review Show. ‘Fears’ is principally about realising what’s really important to you and overcoming your limitations; “I will tell you for the first time, I will tell you what I’ve always wanted to.” Their follow-up single ‘Another Stranger’ was then released in the same year, receiving airtime as Radio 1 DJ Zane Lowe’s Hottest Record and reinforcing their stadium-ready rock sound to a wider audience. ‘Another Stranger’ has slightly more melancholy lyrics than Twin Wild’s other work, telling the well-known story of a relationship that has disintegrated and left both parties wondering how they could share so much and “All so suddenly, you stand in front of me, we can barely speak.”

I hope that My Heart is the start of something truly exciting for Twin Wild – their songs have all the ingredients to become huge hits, and with more exposure, you could very well be seeing them at a stadium near you in the future.

Listen to their new track ‘My Heart’ below, and find the rest of the album on Spotify, Soundcloud or YouTube.