Read more
You are at:Home»Features»Blonde: The many voices of Frank Ocean
By Harley James Mitford on October 12, 2016 Features

Having now listened to Frank Ocean’s long-awaited sophomore effort Blonde an unhealthy amount since its release, I’ve made a few observations that I’d like to share. To set up the context we need to go back to 2011’s ‘Novacane’, on which he delivered the telling line “…every single record, autotunin’ / Zero emotion, muted emotion, pitch corrected, computed emotion.” A fascination with the digitizing of the human voice and the resultant effect on its meaning is not a new concept for Frank, as we can see from the above lyrics. 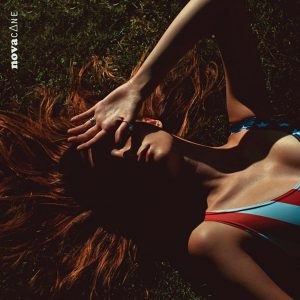 He wryly understands the slippery slope of auto-tune, which in its mildest form can be innocently employed to correct a small vocal blemish. At its most extreme however the consequences can be devastating, removing any and every human error and thereby creating a Frankenstein’s monster of supposed ‘perfection’; a sort of sonic plastic surgery – rewriting the rules for singers so that it becomes necessary for the less strong-willed to perform auto-tuned for fear of their blemishes (the very thing that endows their humanity) being discovered by the indoctrinated masses.

So what’s all that got to do with Blonde? Well, Frank is an example of an artist who thoroughly understands how the digitizing of a voice can be artistically employed. But he doesn’t shy away from his own vocal imperfections either, with many of the tracks featuring highly off-key moments of expression. When he does dabble with audio processing effects however, the results range from obnoxious (‘Nikes’) to sublime (‘Close to You’). He shows a fascination on Blonde with how obscuring his voice’s natural sound can be used to aid a narrative, present another side of a personality, or simply further the emotional impact of a melody. As the Chicago Tribune‘s Greg Kot notes; Frank employs “two distinct voices, like characters in a play, a recurring theme throughout the album and perhaps its finest sonic achievement.” ‘Nikes’ is an example of the most extreme end of the pitch-shifting spectrum, with the whole of the track being chipmunked up into a high soprano register. Interestingly, in its music video there is another voice added to the mix, that of a narrator pitch-shifted way down into a low bass register. So neither voice is in its natural tenor realm here; a bold statement for an opening track. A moral fable about the hangers-on that come with monetary wealth, ‘Nikes’ and its video explore not only Kot’s “play” idea but Frank’s own bisexuality, employing images of him in effeminate garb and make-up, as well as both male and female strippers; blurring traditional gender roles and creating a fluid intermingling of hetero and homo aesthetics. 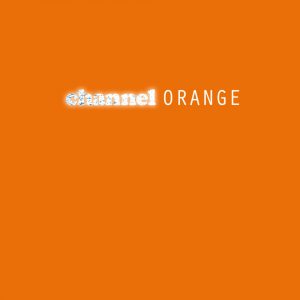 It brings to mind his open letter on Tumblr that preceded the release of channel ORANGE, in which he bravely expressed his tortured experience of having romantic feelings for a man. It could be argued that it was this letter which subsequently influenced the inauguration of a more open mind-set towards the LGBTQ+ community within hip-hop; traditionally a genre which pigeon-holes any sexual identification other than straight as a pejorative other, to be mercilessly jeered at and scapegoated. So in that regard Frank’s open letter helped make a real change to the social trend of hip-hop.

Returning back to the music, and to Frank’s use of voice distortion. In second track ‘Ivy’ his voice becomes more and more distorted towards the end of the track, complementing the rising tension in his intonation. Finally he screams “DREAMING!” at the climax of the song, followed by the music cutting out and the sound of him smashing things up in anger. So grating is the combination of effects and vocal delivery on the last word that the resulting dissonance shakes us violently out of the groove we were so slyly lured into. The gorgeous ‘Close To You’ quotes the tune of The Carpenter’s Bacharach-penned original and uses a harmonizer/vocoder to expand the single line melody into a lush, emotive harmony (think Imogen Heap’s seminal ‘Hide and Seek’). So, it seems he uses vocal effects to annoy, jar, and move us all in the same hour. 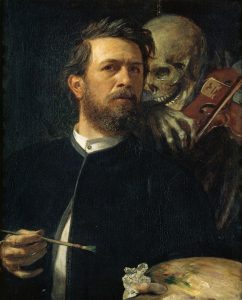 Self Portrait (18720 by Arnold Böcklin – Image via Wikipedia

The most ingenious use of digitization however is also its most simple one. In ‘Nights’ Frank notches the whole song up a tone, as can be heard from this nifty demonstration of what it would sound like brought back down. The result is otherworldly; a sound that is subtly strange and beautifully ethereal. Although in a completely different context, the tuning up bears some relation to Mahler’s Fourth Symphony. Stay with me here – I’ll tell you why. In the symphony’s Scherzo, Mahler instructs the violin soloist to tune up a tone, resulting in a tense, almost supernatural sound. A perfect tool for depicting the Danse Macabre (Dance of Death) led by the fiddle-playing skeleton – a personification of death itself – and supposedly inspired by Swiss symbolist painter Arnold Böcklin’s Self Portrait of 1872 (pictured left). It’s a very different context, yes, but an effect that is weirdly similar in its use of an artificial tuning mechanism to affect the listener’s emotions. Never thought you’d hear Mahler and Frank Ocean in the same sentence, did you? But there’s certainly a connection there.

So when you listen to Blonde again – for the upteenth time no doubt – listen out for these elements, and you may, as I have, find your listening experience greatly enriched by Frank’s incredible grasp of technology and his ability to manipulate your emotions by employing it in just the right way. I’ve only scratched the surface here, and you may well find that that there are more striking cases of this process to be discovered on the album, laden as it is with carefully crafted effects throughout. If you’ve enjoyed reading this little piece, then please do have a read of my five-star review of Blonde here.