Read more
You are at:Home»Features»Freshers’ Special: How Kiki’s Delivery Service helped my transition to university
By Laurence Russell on September 27, 2016 Features

Picture the scene: You’ve just moved into halls of residence, leaving your parents’ house for a strange and noisy city where you’ll be staying away from home for the next three years. You’ve been a little too eager to join in with the fun of freshers’ week and have learned a valuable lesson about your body’s alcohol limit. It’s the morning after a bad night and you’re slowly dying in bed dealing with a hell of a hangover, barely able to move or think. Completely at random, you decide that now will be the day you see the Studio Ghibli gem, Kiki’s Delivery Service, for the first time. 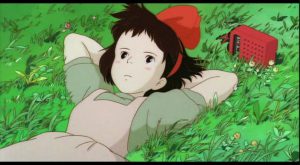 The film opens with Kiki, a young witch in training leaving home to experience a year of living independently, as all witches must do, to mature into a fully-fledged witch. Kiki makes her way to the bustling seaside town of Koriko, filled with screeching automobiles and huge crowds, which overwhelm Kiki, who is still having trouble flying her broomstick. Managing to stay at a local bakery, Kiki is anxious to make herself useful. She believes her only real magical power is flying, and so she starts an airborne delivery service.

Kiki’s new company experiences a number of difficulties, as things constantly go wrong. Slow business, misplaced parcels, rude customers and awful weather make Kiki’s job incredibly difficult, whilst she also has to deal with homesickness and feeling lonely in a strange new world she doesn’t yet understand. Not to mention the polite young boy, Tombo who becomes quite taken with Kiki, who is flattered by his interest in her, but has no idea how to respond to him, or his loud friends. She even becomes ill after flying in the rain, and can’t work because she’s stuck in bed. 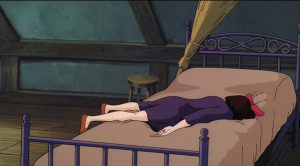 As Kiki’s insecurities and doubts about her new life accumulate, she notices that she is losing her powers, eventually leading to her magic vanishing entirely. Her childhood friend and pet cat Jiji even stops talking to her, as Kiki loses the ability to understand him.

The early parts of Kiki’s journey encapsulate the experience of moving away from home for university. Kiki’s crushing bad luck is akin to the common fresher’s terror in the depths of the Jesters dance floor, when they realise they’ve just dropped their phone. Kiki’s overwhelming new responsibilities mirror the delirium of students attending lectures after a night out, still far from sober as they attempt to write notes with an empty Biro. And of course Kiki’s illness, which causes her to miss work and her friend’s party, recalls to the dreaded fresher’s flu, which has claimed countless victims over the years, causing them to become dead to the world as their body attempts to disintegrate from the inside. 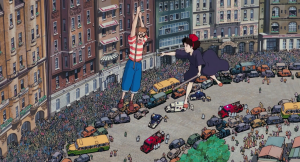 But it’s not all doom and gloom. After Kiki receives some much needed encouragement, Kiki learns to trust in her instincts more and learn to hope that she shouldn’t give up on her new life because of a few setbacks. After Tombo is lifted into the air by a giant dirigible losing control in the summer wind, Kiki is his only hope. When Kiki finally manages to tune out the worries of her strange new life and focus on a single goal, she finds her magic rush back to her. With only a common street sweeper’s broom to hand, Kiki manages to make the old broom soar through the air, rushing to Tombo’s rescue. With great difficulty, she only just manages to save her friend from falling out of the sky, and gains a reputation as a local hero for saving the day.

Back in the bed, you watch the film’s credits with a warm smile, feeling better by the hour, but there’s one final scene after the credits end. Kiki’s dad receives the first letter that Kiki’s sent home to her parents and you hear the words in Kiki’s joyful voice. She ends the letter with the line; “There are still times when I feel sad, but I’m doing fine.” You cry like a third year who’s just missed her dissertation deadline, and forever afterwards see your university life in a new light.

This is part of our ongoing feature for Fresher’s week; read the other titles we think help the transition into uni as the week goes on.