With the release of Imperium this week, The Edge sat down to talk to director Daniel Ragussis about the film, politics, and where he’s going next.

Imperium is Ragussis’ first big feature film, and it’s clear that this was an important project for him. The narrative follows FBI agent Nate Foster (Daniel Radcliffe) who goes undercover to infiltrate a radical white supremacist group who are suspected of terrorist plots. Based on a story of Michael German, a real undercover FBI agent who spent 20 months undercover among white supremacists and right-wing militants, the film is steeped in realism.

Imperium is incredibly revealing in reminding audiences that ideological and militant racism is not an issue which went away after the work of the Civil Rights Movement in 1960s America. It is shocking to see that this movement is alive and kicking today, and even Daniel Ragussis himself wasn’t aware of the extent of this movement until he began research. “That was one of the things that was really shocking to me about the whole thing”, he says, “I not only discovered the size and the depth and the breadth of the community, but also the degree to which huge portions of it were middle class, or affluent, were highly educated…because I think like many people I thought this was the province of the poor and the uneducated and unfortunately it’s not”. 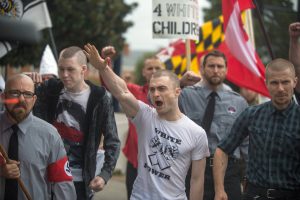 With the white supremacist movement being unfamiliar territory to Ragussis, he explains just how useful it was to have the insight of real undercover FBI agent Michael German when writing the screenplay, “on the one hand I was sitting down with Mike every week for four or five hours doing an extensive interview, but then parallel to that I was also doing my own research…where I amassed this huge white supremacy book shelf which always raises a few eyebrows!”.

As well as first-hand experience from Michael and literature, he explains other sources of his information, “Then of course there’s the internet, where you can find online communities with millions of people in them where people are not only talking about their politics, but about their favourite painting or their favourite pieces of music or they’re exchanging recipes…so the benefit of that for a purpose like this is that you can get a very detailed and nuanced view of what these folks’ everyday life is, which is something which was really important to me to try and convey in the movie”.

The subject matter of Imperium is a sensitive one to say the least, and it couldn’t have been easy for either Radcliffe or Ragussis to work on this film, but Ragussis insists that Radcliffe’s preparation was what made the process so smooth. “He came so remarkably prepared for the role and was so committed to the role…you would think it would be difficult but it wasn’t”. Both were also incredibly committed to the research phase of the film. Ragussis explains that he made Radcliffe a “white supremacist care package” with books and materials which he sent him prior to shooting.

He highlights just how useful Radcliffe’s preparation was due to the nature of the film, “this isn’t often the case with indie films where you have so little time and money…but somehow we carved out a good amount of time before the shoot started…so when the cameras started rolling there was already a great deal of work that had been done”.

Daniel Radcliffe certainly commits to the role wholeheartedly, even though he may not have been everyone’s first choice for an undercover white supremacist, but Ragussis insists that the inspiration came from Michael German himself, who was “nothing like you would imagine an FBI agent to be”. “I sort of imagine this big hulking guy…but Mike is this very unassuming, soft spoken, articulate, literate guy…who would talk to you or I about art and culture and you would never suspect that he was an undercover FBI agent”. 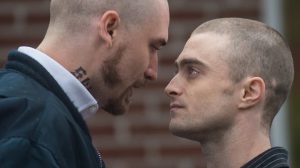 Nevertheless, Michael German highlighted the fact that being an undercover agent is about social skills, and “it’s about relating to people and connecting with people, and having people trust you”. This is what led him to think of Radcliffe for the role, “So once he started describing the work in that way and I looked at him I thought…hopefully there’s an opportunity to do something a little different with the undercover genre…and then casting someone like Dan became perfect”.

Daniel Ragussis says he also that he wanted to emphasise the “complexities of this movement”, as one of the most challenging things about watching Imperium is seeing the human side to these people who are widely recognised as some of the worst people in the world. However, Ragussis recalls that when he was researching he discovered that Hitler loved Wagner, “and I’m a huge Wagner fan”, he says “and I realised that at that moment I was listening to Wagner. I was having the same exact emotional experience as Adolf Hitler, which is a really crazy and disturbing thing to realise!”.

He emphasises the idea that there is a shared common humanity, and that you see online especially that these are just people living their lives every day “and they deal with many of the same things that we do”. He goes on to explain that this is not just true of the white supremacist community, but of every community, including Isis and other groups that we “paint as completely unintelligible to us”. “And I certainly don’t excuse these things” he says, “but I think realising that all these groups share a common humanity with us is something that’s important, and hopefully in the long run something that’s helpful towards dismantling these ideologies”.

With Ragussis’ first big feature film set to be a success, he finishes by talking about other projects he’s working on, including a feature length version of his short film Haber, a script about Freud when he was hypnotising people and discovering his theory of dreams, and a project on the stock market crash in 1929.

Imperium (2016), directed by Daniel Ragussis, is distributed in the UK by Signature Entertainment. Certificate 15.