Read more
You are at:Home»Features»Remembering Marilyn Monroe: The Legend and the Woman
By Bruno Russell on September 20, 2016 Features

Marilyn Monroe is without doubt one of the most famous Hollywood film stars in history. From the famous ‘Diamonds Are a Girls Best Friend’ from Gentlemen Prefer Blondes, to the iconic still of her white dress exposing her underwear in the Seven Year Itch, we admire her as an epitome of the ultimate classical film star. She revolutionised cinema in the 1950s as she captivated audiences as the dumb-blonde character in a range of different personas, with an outstanding level of acting skill and a brilliant voice to go alongside this. She personifies the golden age of Hollywood! But how exactly was her legend formed and why do we remember her so iconically? Under it all, who was the real Marilyn Monroe? 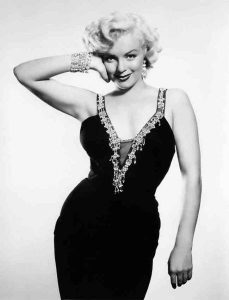 Monroe was certainly more than just your standard film star. Since her death, she has become cemented in the legendary canon of celebrity figures. Today people still collect her photographs, she still has a best-selling yearly calendar and has top-selling statuettes, mugs and canvases. She has become almost symbolic of the golden age of Hollywood and cemented in our memory and culture. However, it’s harder to answer why she is regarded as such a legend. Why are her co-stars, for example Jane Russell, not remembered with such fondness and grandeur? One reason could certainly be Monroe’s use of body and sexuality. On one level she was conventionally attractive: her public presentation, as well as her films, used her hour-glass figure to great effect. She was also often presented in either black or red to subconsciously represent sexual desire and lust, or in white to express her sexual innocence that men then desired to take. Sexually innocent, however, she was certainly not. Monroe understood and played the sexual conventions of the day and even appeared nude on the cover of the first, and subsequent, issues of Playboy.

Her sexual appeal didn’t end here either. While her body and sexual teasing captivated men, women were equally obsessed with her image. On one hand, they wanted to imitate her image and allure in order to appeal to men in the same way. But on the other hand, she also represented a unique form of feminism: she had a hold over men and allowed women to realise they also could obtain this. She understood how to use the female body in a way that did not objectify her but rather gave her power in the political gender-play of the 1950s. But this sexual appeal was also linked to her ‘dumb-blonde’ character suggesting, in Mailer’s words, that while sex might ‘be difficult and dangerous with others, [it would be]ice cream with her’. She represented exactly what men wanted but could not have: she was the unattainable (and indeed her image had been constructed as an effort by 20th Century Fox to draw more men to the cinema in the 1940s). By the time her career was at its peak, she epitomised sexual glamour and sexual innocence simultaneously and, by doing such, challenged pre-existing sexual ideologies in the most exciting and legendary way. Her screen construction was perfectly pitched. 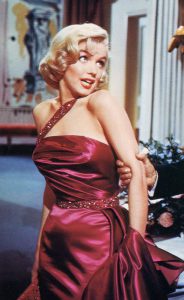 Monroe from ‘How to Marry a Millionare’ [20th Century Fox]

But I think, as some historians have done, to try and explain her legend just in terms of her body and sexuality is somewhat of a mistake. I think she is remembered for two other reasons: firstly her actual talent and authentic personality on the screen, and secondly the ‘public-private’ life that was constructed for her, and to extent by her, which allowed her to manipulate and use the press, and for the press to use her as a commercial tool. It would be a mistake, I think, to excuse Monroe’s actual acting talents from a discussion of her famous legend. While, naturally, they would not have been enough to create her image today they were central to her on-screen construction. She managed to convincingly portray the dumb-blonde character in a range of roles from the gold digger in How to Marry a Millionaire to the sexually ‘dumb’ in Bus Stop. Alongside this was her incredible talent as a singer as she recorded some of the most iconic film songs which also exposed the vulnerable tone to her voice and allowed her to polish her on-screen character construction. She was an incredibly skilled actress and this was foundational to everything that was then added on to this to turn talent in to celebrity.

Her ‘public-private’ life, however, is even more even important. I use this phrase because to assign Monroe a private life is somewhat of a misnomer: her ‘private’ off-screen life was as public as her cinematic character portrayals. Of course we all remember the iconic ‘Happy Birthday Mr. President’ song to Kennedy and the surrounding rumours that there was an affair between them. 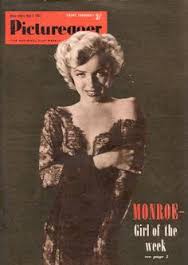 Her numerous marriages were the subject of extensive press scrutiny, as was her backstage behaviour, on-screen antics, fashion choices and day-to-day life. It would be fair to say that Monroe had no private life as her whole life both on and off the screen was extensively covered in film-fan magazines such as Picturegoer and Photoplay. This had two effects. The first is that this – alongside her unique on screen sexual construction – allowed her fame to grow to such a level that it would live on as legend after her death. We remember Monroe now as much for her films and figure, as we do for the scandals that surrounded her and Kennedy that are still the subject of modern public fascination. The second is that, I believe, it caused Monroe’s own deterioration. She killed herself due to her depression saying that ‘Beneath the makeup and behind the smile, I am just a girl who wishes for the world… An actress is not a machine, but they treat you like a machine. A money machine’. It seems that she killed herself because she could no longer face that her own identity was lost and the one that replaced it a constructed façade.

Monroe stands as a sad reminder that fame can remove any right to a private life and, as a result, remove your own identity in favour of the one constructed for you on the screen and in the press. Monroe committed suicide because she was no longer Monroe. Even this authentic declaration, however, was to be manipulated by the press as the New York Daily Mirror suggested sensationalised murderous alternatives and even today people commonly suggest political conspiracies rather than face the real reason she ended her life. We rightly remember her for her acting talents and representation as a sex symbol, but I think she deserves even a higher level of respect than this as she essentially becomes a martyr to the consequences of fame. She is a cultural symbol that we should be careful exactly what we wish for.