We’ve all seen a fair few dating shows in our time, from Dating in the Dark to Paddy McGuiness’ ‘no likey, no lighty’ show Take Me Out. But the newest contribution to this genre seems a lot more worrying: a dating show where you choose your date based on nothing but their naked body. We’re left asking some worrying questions: should dating be seen in this way? How does this blur the lines between dating and sex? Can we really have a Naked Attraction? 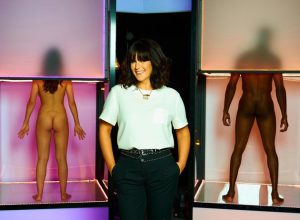 The idea of Channel 4’s new reality dating show Naked Attraction is quite simple. One woman, or guy, will have six potential dates revealed to them slowly as they voyeuristically explore and assess each part of their body, starting with the bottom half and then moving to their genitals, their chest, voice and so on. The catch is that they are all naked and the date is chosen purely on physical appearance alone. The effect of this is that dating is promoted solely as a sexual activity. Why does it matter (and these are quotes taken from the show) if she has a ‘tiny vulva’ with ‘no mess’ or if he has ‘quite a lot of excess foreskin?’ Admittedly, these may be considerations later in the relationship in terms of how you engage sexually, but how do they impact your ability to date and love someone else? There really seems to be no link between a man’s 6 or 7 inch penis and his suitability as a future boyfriend. It just seems downright odd and backwards when the question becomes ‘will they like each other when the clothes come on’?

But what really is so wrong with this new television format apart from this odd and backwards feeling? Why is it really so damaging to society? On the broadest level, its removing personality from dating or, at least, making it second-rate to physical appearance. This just fuels the judgemental society and reinforces body problems whereby men feel they have to be thin, with well-jelled hair and at least a six-inch dick, and woman feel they need the perfect hour glass figure and to be perfectly shaven for the purpose of male entertainment. None of this encourages body confidence but rather forces us all to aspire to the same goal and experience anxiety in the process. In fact, The Guardian’s sex survey found that 77% of men and woman have body anxiety (of which 29% have it in a form that is negative to their health), and 38% of us would happily reduce our life to gain the perceived required physique. Dating should combine appearance with personality. Naturally you are not going to date someone you aren’t attracted to, but someone you want to spend your time with should appeal to you on personal levels: their charm, their humour, their likes and interests. This is exactly what Dating in the Dark – a show I think should be watched a lot more – promotes: finding ‘the one’ by personality first and appearances second. Naked Attraction is promoting and representing a misinformed and worrying dating culture. 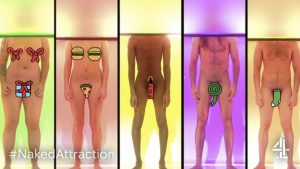 What is dating by the look of our genitals and chests going to do to our body confidence? [smash.com]

This isn’t the only social problem that the show raises. It also seems to raise worrying concerns over media censorship and press privacy. The show’s format works by asking the contestant to pick some pre-determined features they like in a partner (i.e. tattoos, big dick, muscly chest) so they can find six naked potential dates. But then when asking why they have chosen such features they give reasons like ‘I want a man with better foreskin than my past boyfriend’ or ‘this feature signifies to me I’ll get a better sexual experience than my previous partner’. Worryingly, this blurs the public-private divide. If we maintain that the phone-hacking scandal was socially wrong, then why can people reveal the sexual habits and physical physiques of their partners? Especially when modern day social networking makes it relatively easy to reveal that partner’s identity. Furthermore, the show then has observations like ‘I’d prefer a cleaner vagina’ or ‘I want a man with a good snail line’ backed up by some kind of quasi-scientific evidence that seems to purposefully mislead the viewer into believing this form of dating is promoted by science. There seems something fundamentally wrong about this type of media leading and lack of censorship.

But the worries go even further than social considerations. Over-focus on appearance is one thing, but Naked Attraction also blurs (and seemingly conflates the line) between dating and sex. Dating, essentially, seems to become a sexual activity. ‘Right now sex’ is morally allowed in various forms, including prostitution and modern-day casual sexuality (sleeping around). But Naked Attraction does not promote ‘right now sex’. It promotes ‘right now body dating’. This is hugely problematic as it corrupts the boundary between sex and dating and makes it appear, especially to young teenagers who might watch this show, that to date someone you must engage sexually with them. In my opinion, there is nothing wrong with right-now sex when it’s clear only sex is on the table. But Naked Attraction appeals to this idea and dating at the same time and ends up making the former wrong by allowing it to link too, and corrupt, the latter.

So it seems that Naked Attraction is one television show that certainly never should have been commissioned. While it may reveal some of our tendencies to be sexually judgemental, this is not something we should be promoting, due to its issues with body anxiety and televisualised pornography. Meanwhile it’s also wrong on ethical and moral grounds as it combines our allowed desires for ‘right now sex’ and for dating into a problematic middle ground that raises ethical and cultural problems. Naked Attraction is thus certainly doing a lot more harm than good; we can only hope this is one show that doesn’t get a second series.