Read more
You are at:Home»Features»“I love to play characters that aren’t necessarily being given a voice in film and television”: An interview with Afsaneh Dehrouyeh
By Harley James Mitford on September 6, 2016 Features, Film, Interviews, Interviews

Up-and-coming English actress Afsaneh Dehrouyeh is on the verge of big things. Having landed a prestigious role in the current series of US political drama Tyrant, she’s also just starred in Conor Ibrahiem’s Freesia; Britain’s first film to deal explicitly with the pertinent issue of Islamophobia. I recently had the pleasure of speaking with her about her past, present, and future work. 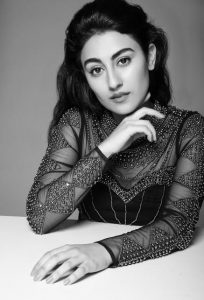 So, tell us a little about yourself. Where did you grow up, and what was it that made you want to pursue a career in acting?

I grew up in Cheltenham and moved to London when I was 18 to go to Goldsmiths University and never moved back. I always loved performing as a child and caught the acting bug very early on. I grew up doing amateur theatre after school and at the weekends with Theatre Studio at the Playhouse theatre and always knew I needed acting to be more than a hobby. Whilst studying theatre making at Goldsmiths I began to explore filmmaking independently but at the same time was realising that I was never going to be content unless I gave acting my best shot. So when I graduated I spent a year working in bars and auditioning and although I did get some work I still knew that I wanted to do this properly by getting training. By this point I was obsessed with screen acting and thankfully I managed to get a place at the International School of Screen Acting.

You graduated from the School along with Susie Coreth in July of last year, what was your time there like, and what was it that brought you two together to make short films?

My time at the school was a priceless experience. Like everything in life, I really think that drama school is what you make of it and I knew my year of training there was going to be precious so I really threw myself into it in every way I could. I knew it might be the only time that I could wake up every day and go do what I love most, learn more about it and fail as often as necessary in a safe space. I never wanted to take that for granted. The great thing about ISSA is that the ethos of the school is to create your own opportunities. They want to prepare you to go out into a competitive industry by giving you as many skills as possible so that you’re not sitting around waiting for the phone to ring after graduation. One of my goals has always been to have my own production company and Susie and I began discussing short film ideas whilst we were still at school. A couple of months before graduation we came up with the idea for Only Human, so we started writing it once we finished.

What can you tell us about the premise of the film, and your reasons behind making it?

We wanted to make something that was meaningful to the both of us but also relatable and current. It follows a day in the life of two women living a century apart, Susie in 1916 and myself in 2016. Both women face a similar trauma in being left behind by a younger sibling. We hope that by connecting the two women’s backgrounds and stories together, it will encourage people to see a different insight into how relevant traumas going on in today’s world can affect people. 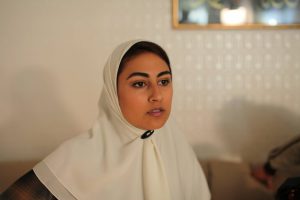 There seems to be a polemical edge to much of your work, including recent film Freesia (pictured left). Is that a coincidence, or is there a particular political or social message you’re aiming to send out to people?

It’s a coincidence, but I do love to play characters that are relatable but aren’t necessarily being given a voice in film and television. I would definitely say that I am drawn to strong-minded characters and scripts that have depth and ambition, but no there isn’t a particular message that I’m trying to send out.

You’re in the new series of US political drama Tyrant, congratulations! How did you get the gig, and what – if anything – can you divulge about your character?

Thank you! Well it has started to air but I still don’t want to give too much away for those who are planning to watch it. I play a young woman called Mahdiya who is a very strong minded and fearless university student. When we first see her she is determined to witness a change in her country and she is searching for her place in society in order to make that happen. She is radicalised and joins the Caliphate, but you’ll have to watch and see how that all pans out and what life in the Caliphate is like for her. You really can’t ever predict what is going to happen to her next so it was fun to experience all those challenges. Tyrant is shot in Budapest so a lot of the casting for the show happens in London which is where I auditioned for the part. 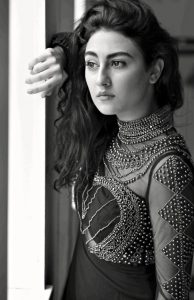 Our recent Brexit sadly seems to have sparked a lot of racism in this country. As a Briton of Middle-Eastern origin have you or your family ever experienced any racism here at home, and what in your opinion can be done to prevent hateful attitudes from developing in the future?

I think the only way to prevent it is through education. People of my generation can only have these hateful, ignorant opinions because of what they have been taught to believe. We have to focus on how our youth are being brought up and educated.

Finally, is there anything else you’d like to tell our readers, either about yourself or more generally?

Just thank you for having me today and if anyone would like to keep in touch or ask me anything then you are welcome to by Twitter and Instagram.

Freesia is currently picking up awards at festivals around the world, watch the official trailer below.