Read more
You are at:Home»Features»“I still don’t know what happened!”: An interview with Patricio Valladares, Barry Keating, and Natalie Burn at FrightFest 2016
By Harley James Mitford on September 5, 2016 Features, Interviews

Waking up bright and early last Sunday, I headed down to FrightFest in Shepherd’s Bush to see Downhill; a horror-comedy about BMX biking and Satanism – well why not? When I arrived, there was many a ghoulish sight to be seen; cult DVD collections, fans dressed up as their favourite monsters and beating hearts on butchers’ hooks. After the screening I had an opportunity to speak with Downhill’s director Patricio Valladares, writer Barry Keating, and lead actress Natalie Burn about the film, as well as a little about themselves, Takashi Miike, the Royal Ballet, and flaming cabins…

Natalie: “I’m not married.” [Everyone laughs]

Good to get that in there early on.

[Laughs] Right well we’ve covered those then, good. So Patricio, what would you say your influences were as a director?

Patricio: “Takashi Miike, because I remember Visitor Q was like “whooaah!” and Dead or Alive was like “whooaah!” But they’re too much experimental or extreme movies, the problem is you have to make movies for money too. So I make a movie on my idea but pick up other influences too. I have a lot of influences on the movie.”

What drew you to horror as a genre, in particular?

P: “I love the comic books of Todd MacFarlane and the Lionsgate titles from their horror movies. And I love comedy. When you’re making horror movies you can shock the audience, but I think it’s more funny. Sometimes you see a movie and there’s too much talk, talk, talk. If you make the movie faster and more entertaining…”

Cool. Natalie, you trained as a ballerina, first at the Bolshoi and then at the Royal Ballet; both very prestigious schools. What was the Prima Ballerina experience like for you? 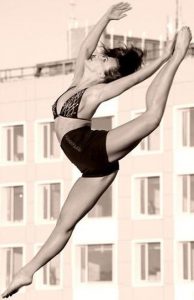 N: “Completely different to what I’m doing now. [Laughs] Ballet is probably the toughest thing I’ve ever done in my life, obviously. Difficult hours training. The Royal Ballet was a tough cultural difference; I’m Ukrainian originally. A different kind of school. It was something that definitely built my character and prepared me for life I’d say. So nowadays I feel like nothing really can challenge me as much as ballet did. So I’m like a stone; I’m ready to defeat Hollywood! I’m just kidding.

But seriously though, it trains you as a child and I started dancing when I was like three years old; starting from the Bolshoi and coming to the Royal Ballet. That was my first life, that was my career until I got injured. Then I moved into acting because I realised that for athletes, gymnasts, and ballerinas unfortunately the career is so short. You have to know where you’re going to take yourself, and I quickly realised acting was something I could continue doing for many years, and I started producing as well. It’s something that’s a long-term commitment, and with my background as a ballerina, it definitely helps me in terms of physical roles. I feel I can control my body a lot better than other actresses out there.”

So the physicality of ballet has really helped you as an actress?

N: “Absolutely. I love physical roles. I love to challenge myself. I love taking parts where I have to do a lot of stunts or fighting or any kind of sports, because I miss it. My body is in need of training and putting myself through that pain. For me it’s like “oh, that’s my excitement”, so when I get to do both in a film, that’s a winner. I wanna do it.”

N: “Also a ballerina.” [Everyone laughs]

Barry: “Yep, but unfortunately I injured myself putting the tutu on and that was it.”

Well there you go, what you gonna do?

We’ll leave that one on the side maybe. So, video games, is that where you started out? 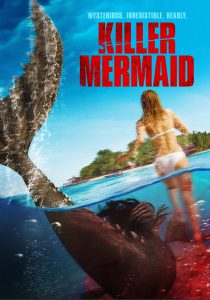 B: “I started off as a journalist myself; video game journalist, film journalist, and then I transitioned into video game development. But I always wanted to be a writer, always wanted to write movies. Then I was working for Sony Playstation in their studio in Liverpool and it closed down. So I was thinking “what am I going to do?” I started thinking about film and did my first film with Natalie; Killer Mermaid, which played here [FrightFest]. That was great, and it really opened the door; if it wasn’t for that film then I wouldn’t be sat here. And I was introduced to Patricio then; we worked on Downhill and it all came together that way.”

N: “And I didn’t even know that Downhill was written by Barry. I was contacted by Patricio and then I start reading it. Only after I finished reading the script did I go back and I was like “Barry?!? Again? My God, I can’t deal with this writer again!”

B: “…Ghosts of Garip, and then we did Nightworld where Natalie was one of the producers. And so we’ve been working together quite a while now, you know. It’s kind of like a twisted family. “[Laughs]

Just after the screening you said that you two [Barry and Patricio] had only just met in person today. What was it like making the movie over the internet, was anything lost in translation?

B: “The entire movie.” [Everyone laughs]

B: “It was a blessing, you know? He wants Satanic… pffft, whatever. Okay.”

N: “And then I didn’t even know how he was gonna put it together. I’m like “huh, I wonder how he’s gonna do it,” and then the movie starts with the cult. I had no idea it was gonna start with the cult so I was like “huh? That’s not how I read it!” So it’s all [Patricio] basically. As long as it makes sense right here, [laughs]then we’re okay.”

B: “I don’t think anything was lost in translation, we just – back and forth via email – developed shorthand I think, bouncing ideas backwards and forwards.”

P: “The script was… not too much space, I think three pages!” [Everyone laughs]

B: “Three? One and a half man… including the comics! Yeah I think the script was really tight, I’m a big big fan of Walter Hill and his style of writing. It’s just one line, boom, description, boom, one line – and there’s your action. No big blocks of writing. So I think it was a fast read, it was kind of fun to do and it was the first time I’d tried to write in that particular style. Since then I decided I prefer this; I’ll just stick to writing in short descriptions.”

N: “I was like “Barry, what’s my character like in three words?” He gave me a description and I was like “alright, good enough!” [Everyone laughs] And it’s impossible to ask this one [pointing to Patricio], he just says “Action!”

So the Hitchcock method?

N: “No, this one doesn’t talk. You ask him a question and he just looks at you and walks away. [Barry laughs] I’m like “was that an answer? I don’t understand.”

P: “I remember we were doing a shot; Natalie came over to me and I was like “Okay, we’re good!”

The make-up and special effects looked like a lot of fun. What was the weirdest or the craziest thing that happened when you were doing all of that?

P: “Well my reference was David Cronenberg’s The Fly. So “like this, but more cheap please!” [Everyone laughs]

So the body horror element…

N: “Four or five hours in the morning to put it on and then the same again to take it off in the evening. The funny thing is that I hadn’t seen him in the make-up. My first reaction was when I stepped in front of the camera and saw his face. They kept me in the dark on purpose.” 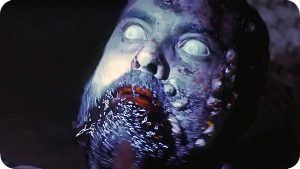 N: “Yeah. Bryce [Draper] couldn’t see because he had white contact lenses on. So I had to literally take him by the hand and put him in place. It was so psychological for him because he was in this crazy mask and couldn’t move, it was very tough to stay still. Plus he couldn’t see. The whole situation was frightening; psychotic and Satanic already. Because we were living in the place where we were shooting we were all very close by to each other. That whole Satanic feeling never left until we were back in our reality, which was pretty awesome because everything’s happening while you’re living.”

Wow. So then the cabin fever becomes a real thing?

N: “Just like that. And all the light went completely dark and all we have is my flashlight like this [gestures]shaking on The Stranger, and then the fire. We continued shooting and then all of a sudden – after we’re done – he says “cut!” We ran out of the cabin trying to save it. It literally was the best moment ever!”

P: “And The Stranger was alone.” [Barry is in hysterics at this point]

He had the [white contacts in his]eyes too? Oh no! Poor guy…

N: “That was the craziest moment ever, we freaked out. Those moments were crazy because they were real and we didn’t know; I never knew what was happening. And you can’t talk to him [Patricio]. You’re like “well what do I do?” and he goes “action!” and you’re like “dammit! Where are the things coming from?” You never know what’s going to happen. But that’s what’s fun about it. I love Horror movies so I literally felt like I was in a Horror moment. There was always something happening.”

As we parted ways I was left chuckling to myself about the insanity of the whole project, and how much fun it must’ve been bringing it about. If you’re curious to find out more, read my review of Downhill here.