Today (Monday 5th September 2016), marks what would have been the 70th birthday of one of the most iconic singers in music history: Freddie Mercury. Famous for his extravagant showmanship and charisma, as well as his exquisitely skillful vocal range and virtuoso piano-playing, Mercury’s legacy among music fans and the industry itself is unparalleled. On the 70th anniversary of his birth, and in celebration of his illustrious and all too-short career, we share some of our favourite Freddie moments – from the endearingly ludicrous characters he concocted in various Queen videos to his incredible talent for exciting a crowd.

His performance of ‘Bohemian Rhapsody’ at the Odeon Hammersmith in 1975

‘Bohemian Rhapsody’ is one of Queen’s most iconic, beloved tracks. It’s been re-recorded and covered to death by dozens of musicians in the decades since it was released, but try as they all might, none of them can compare to Mercury’s original vocals. Mercury’s live performance of the song at the Odeon Hammersmith in 1975 is a testament to his incredible talents not only as a singer and performer, but also as a skilled musician in his own right. As the frontman of Queen, Mercury was arguably the driving force of the band during their peak. He wrote a large majority of iconic tracks – including BoRhap – and paired his belting set of vocal pipes to dozens more, as well as playing a variety of instruments – most notably the piano. In the video below, Mercury exemplifies what every musician should aspire to be, giving his all into offering a deeply passionate and incredibly realised live performance.

When you visualise Freddie Mercury in your mind, I would like to think everyone comes up with one of two images: either the iconic frontman at Live Aid, swathed in yellow leather and all the majesty of a showman at his best or the mustachioed housewife with dangly earrings and a tight latex skirt from the ‘I Want To Break Free’ video. There’s a reason that this video is so loved and remembered and I would argue it’s almost entirely because of the irresistible star power of Mercury. You can’t keep your eyes off of him. Even when the drag parody of Coronation Street manifests into a slightly artier ballet performance, in which Mercury is like some dalmatian-spotted adonis aggressively diving into grapes, he’s still so watchable – even decades later. His sheer charisma cannot be understated and it is undoubtedly a huge part of what has made his appeal so long-lasting.

His improvisation with the crowds at Live Aid

Showcasing his abilities as one of the finest singers and frontmen in the business, in front of one of the biggest crowds in history, at one of the most famous concerts in history, Freddie Mercury basically defined himself and his legacy in two minutes.

How you might ask? By singing out a series of notes to the crowd and goading them to sing it back. It’s simple, it’s entertaining and it’s a sheer joy to watch. Mercury’s vocal range is fantastic and his on stage charisma is unbeatable; whilst the likes of Billy-Joe Armstrong might endlessly sing “Heeeeyyyy Oooohhh” to his crowds, and James Hetfield bombards his audiences with a barrage of “YEAH”s, nothing can quite capture the pure magic of this moment. As mentioned, this is unquestionably one of the best concerts of all time and still stands out as one of the best and most famous moments from a truly epic show. It’s Freddie Mercury personified; the confidence, the swagger, the charm, the charisma and the showmanship; there’s never been a performer like Mercury and there never will be again.

Skatting with David Bowie in ‘Under Pressure’

Thanks to my parents, I was exposed to the rock genre at a very early age. Two of the most prominent musicians of my former years were Queen and Bowie; lo and behold my Mum introduced me to a little something by the name of ‘Under Pressure’ that involved the two.

The first single from one of Queen’s less popular records Hot Space (which is hard to understand with the tune that is the second single, ‘Body Language’), ‘Under Pressure’ saw the combination of two polar opposite yet complementary vocal ranges from Freddie Mercury and David Bowie. Both happened to be in Montreux, Switzerland; Queen were at their studio and Bowie was living there at the time. Bowie originally came to the studio to record back up vocals for another Queen song entitled ‘Cool Cat’, with Bowie’s vocals ultimately being scrapped as he wasn’t satisfied with his performance.

‘Under Pressure’ didn’t come without controversy however, not in the relative sense but within the band. It all revolves around the creation of the bassline; was it John Deacon, or was it Bowie? Deacon says it was Bowie, Brian May and Roger Taylor say it was Deacon, Mercury stated that Bowie changed Deacon’s bassline to what is heard on the final song, and Bowie recollected that the bassline was already written before he became involved. We may never know who actually came up with the bassline, but thank God it exists. 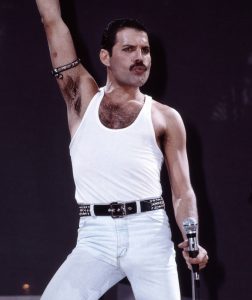 Bob Geldof’s Live Aid is one of the most memorable music and charity events ever. Known as the day ‘the music changed the world’, the 10-hour concert was organised to raise money for the Ethiopian famine. Running simultaneously in both the USA and the UK, Live Aid featured a number of globally successful acts including Status Quo, Sting, Billy Ocean, Bryan Adams, U2, The Beach Boys, David Bowie, Madonna, Bob Dylan, Mick Jagger, Phil Collins, Paul McCartney and many more. However, one man in particular stole the show and is one of the many reasons why Live Aid was so successful. Freddie Mercury and his band Queen performed an absolutely phenomenal set on July 13th 1985, and were virtually impossible to follow.

The performance was all round fantastic, but credit really is due to Mercury. He was electric from the moment he walked on stage. They covered a number of their most popular songs including. ‘Radio Ga Ga’, ‘We Will Rock You’ and ‘We Are the Champions’. Starting with ‘Bohemian Rhapsody’ on the piano, no one knew just how explosive the rest of their set was going to be. Leaping up for the piano, Mercury utilised the whole stage for the rest of their performance. A number of crazy moments followed including playing his microphone like an air guitar, call and response with the crowd, and the iconic ‘Radio Ga Ga’ clap movements.

Having lost momentum in the early 80s, Queen found new life at Live Aid and Mercury performed for 20 minutes like his life depended on it, and helped reassert the Queen legacy that still lives on today.

Are you really a bonafide rock star if you haven’t made a couple of really bonkers music videos? For ‘I’m Going Slightly Mad’, the title warranted some kind of extreme lunacy and it really delivers to that effect, with it’s dancing gorillas, banana crowns and penguins. This was one of the last videos that Mercury recorded before he tragically succumbed to the effects of HIV, but even as he himself was fading, his star power was still shining. Bursting from the black and white screen with all the presence of a vaudeville star, it’s amazing how endlessly watchable Mercury continues to be.

The extravagant video for his solo single, ‘The Great Pretender’

Though the legend of Freddie Mercury is always very closely associated with Queen, he did branch out by himself in his later years. ‘The Great Pretender’ is probably his most famous solo track and goes to show how much of the slightly wacky, exuberant stylings of Queen stemmed from Mercury himself. In the music video, Mercury descends from a grand staircase with all the majesty of a king (or Queen?) and alludes to highlights of his career with Queen. It also sees him dressing up in drag once again and on the whole, with it’s exuberance and style, encapsulates what makes his legacy so great.