Read more
You are at:Home»Features»“Thanks for nothing, colonialism!” An Interview with Steve Sladkowski of PUP
By George Seabrook on September 2, 2016 Features, Interviews

The second album from Canadian Punk rock band PUP, The Dream Is Over, was released in May 2016. Its ten blistering, raucous, and gleefully defiant tracks, all written in a brief springtime break between endless touring in 2015, recorded in the autumn of that year, make up one of the most vital rock albums of the year. It’s just about the best way to spend 30 minutes of your valuable time listening to new music. And it’s not just small outlets supporting the band: PUP are one of ten nominees for the 2016 Polaris music prize, the Canadian equivalent of the Mercury music prize. We caught up with guitarist Steve Sladkowski, to ask him about how it felt to be nominated, amongst other things.

Congratulations on the album, it’s really terrific, and on being nominated for the Polaris music prize. You’re in some pretty esteemed company this year, many of them nominated on the shortlist for the first time too. How did you feel when you first heard about it, and what does it feel like now?

Thanks! It’s truly insane to see our album alongside so much diverse Canadian talent. It didn’t really feel real then and it doesn’t really feel real now. We still don’t think we’ll win — and unfortunately we’ll miss the gala ceremony with its free food and booze ’cause we’re in Vienna that night — but we get to send our parents to party, and probably lose, on our behalf.

Obviously, you’ve done a lot of interviews around the new album and the tour – what have people asked you the most? If it’s the same question that we just posed to you, we’re very sorry.

“So, tell the story of “If This Tour Doesn’t Kill You..” Do you guys really hate each other?”

What do you think has changed about the band, or about the world, that might have helped The Dream Is Over to get this sort of recognition?

That’s a difficult question to answer. If we could predict the pace of changing attitudes, we’d probably do something more than make records. We just wanted to refine what we felt we accomplished on the first record — and clean up some of the things we didn’t like — while feeling like we’d also progressed as songwriters and players. Whether or not that is what changed peoples’ opinions or broadened our audience is virtually impossible to tell; and furthermore, it can be a very dangerous game to attempt to think about critical reception whilst writing and recording a record. Pandering is the quickest way to put out stagnant, boring, and irrelevant music.

The UK equivalent of the Polaris prize, the Mercury Music Prize, has just announced their shortlist of 12. Have you heard any of those albums, do you have any favourites?

I’ve heard the Bowie record; the first single off The 1975 record which… sounded like a Bowie record; the new Radiohead record; and some of the Skepta cuts. I recently got a crash-course in UK Grime from our lovely British tour manager Stanley Richard Somerville IV and it is really something else. Let’s go with Skepta as a favourite, Bowie second, Radiohead third; and probably the 1975 last behind those other records I haven’t heard.

This is one which comes straight from twitter: why did the cops get called when you played at Hillside Fest? Is that a goal you set for gigs and festivals, if it calls down the establishment? 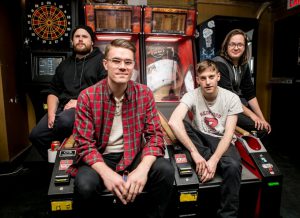 I would say that involving the police in anything tends to be about as far from a goal at our shows as we could possibly get. The reason they were called to a previous gig at Hillside was due to an unexpectedly rowdy mosh pit which produced an even-more-unexpected young gentleman under the influence of psilocybin who would not calm down.

Everything about the album makes it feel like you’d be angry all the time, but everyone says you’re the most, polite band in the punk scene. Does putting on more explosive and angry shows help you relax day to day, or are you just so effectively polite that you can say the meanest things with a smile and no-one will mind?

We’ve been very fortunate to perform in a great many countries to mostly-receptive audiences. Those sorts of opportunities afford a lot of catharsis. I think it’s important for performers to leave it all onstage, much like great athletes or actors do; doing so allows you to come back down to earth and realize that, at the end of the day, you’re still just a normal human being trying to get through life without being too much of a jackass.

Your twitter page had a few interesting things to say about Brexit on the 24th of June, like how you’d sponsor immigration to Canada, how you were drunk in Boston watching the currency tumble, and how it’s finally affordable to tour here. Those all seem like very mixed emotions and approaches – any thought as to how you might incorporate that anger and whatnot into your UK gigs? Maybe Canadian dollars cannons instead of confetti?

Those Tweets, like most of our online presence, were certainly sent with our tongues firmly planted in cheek. Besides which, even with the massively confusing fallout from Brexit, the pound is still ludicrously expensive when exchanged against the Canadian dollar. Thanks for nothing, colonialism!
All kidding and geo-politically-induced-socio-economic-reality aside, the UK has been one of the most receptive and enjoyable touring markets we’ve encountered. This tour will be our fifth visit, and first headline, so we’re quite excited to be back. Who knows… maybe we’ll be able to subsist on something fancier than Tesco meal deals this time around!

When you’re touring, do you like keeping up with current music, of different genres, or do you have set albums and artists that keep you sane in tour buses?

Hah! Tour buses! How flattering of you. We’re nine people in a nine-seater on this tour. No luxury for us, man. We listen to an equal amount of podcasts and Spotify. Some current favourites of mine include Malcolm Gladwell’s Revisionist History (podcast); Mosey by Daniel Romano (album); There’s A Lot Going On by Vic Mensa (album); Benjamin Walker’s Theory of Everything (podcast); and anything that piques my interest regarding weird sounds and ideas floating around the ether. Everyone also brings headphones because sometimes your bandmates aren’t as interested in podcasts about baseball statistics (weird, right?)

There are almost no slow songs on either PUP or The Dream Is Over, so bringing that to a live show, and keeping the audience’s energy up for a full hour or more has got to be a challenge. Does that affect how you draw the set lists and how you interact with the audience?

Certainly. Some of the mellower material — ‘Pine Point’, ‘Yukon’, ‘The Coast’ — tend to be important set pieces that we build around. Often, we’ll construct sets with the audience in mind. It’s insane to do more than three or four songs without a break because one or both of the audience and us would be totally exhausted. As we begin playing longer sets, we’re starting to think even more about pacing and song groupings so that the set is a little bit different every night.

Have you played at the Joiners before? If not, what are you expecting from the crowd, and how the UK might differ from punk scenes in the U.S.?

There is no venue in the entire United Kingdom that we have played more times than The Joiners. I believe this will be either our forth or fifth time on its stage. We’re one of the few bands that Tricky Ricky Bates has allowed to stay in his new flat. The second time we played there, some very brave people decided to make a human pyramid in front of the stage and high-five us mid-song.

And finally, since you wrote a song about it in ‘Sleep In The Heat’, if you had to die (having lived) as any animal, which would you pick?

Definitely a whale. Those things know how to live.

PUP’s Polaris award nominated second album The Dream Is Over is now available on iTunes, Spotify, and in stores. Their 2nd September headline show at The Joiners Southampton is sold out.