Read more
You are at:Home»Features»“It’s something perfect that had been ruined or torn and that’s what the album is all about really”: An interview with Josh from Beaty Heart
By Josie Osborne on August 27, 2016 Features, Interviews

Fresh from releasing their second album Till the Tomb, I caught up with singer Josh from electro-pop trio Beaty Heart, talking about music to be drunk to and the days all blurring into one.

Do you prefer the new album to the first one?

Yeah I prefer this one. I think that the first one was a fun time, but I don’t think it necessarily represents what I want to be as a musician. I think what happened was the first one took such a long time to get out, it just kind of, what we originally wanted to do with it maybe got lost. So whilst I enjoyed and appreciate the times we had with the first record, this new one gives a better indication of who we are. The first one, the recording process was really broken up and fractured so we started recording it like a year before we actually finished it, but this new one, after we got off tour for the first one we wrote it in like six months then got straight back into the studio. We were almost like, we couldn’t really wait to get back in and do something else.

What’s your favourite track from the new album?

Probably the first song on the album, ‘Flora’.

It’s been championed by Annie Mac and Huw Stephens hasn’t it? – I keep seeing them tweeting about it.

Yeah they’re all really into it! We wanted to release that one first from the album as it’s how we really want to represent ourselves, so yeah, I really like that one.

Would you say you guys are ready to be back on the road? 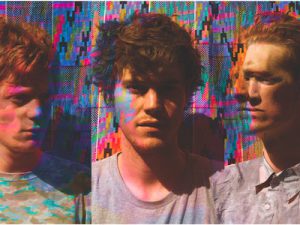 It’s really exciting, going on tour is great. It’s definitely really hard work but always really rewarding to be able to share these new songs with people. Obviously it’s still pretty new to us to be playing and we’re kind of still learning about these songs every day so it’s exciting.

Is there anything you miss in particular when you’re on tour?

I mean like, I like being on the road, cos I like the experience of being somewhere new every day, but there’s definitely things that you miss, like your creature comforts. I just like sitting at home, watching movies, listening to music and hanging out with my girlfriend really – really boring things. The grass is greener on the other side though, like that last week of tour when the end is in side is when you miss home the most but then you get off tour and you can’t wait to get back on the road again.

Have you got a favourite new song to perform yet?

There’s a lot I like playing- I think ‘Glazed’ and ‘Flora’ are my two favourites so far; the whole band would probably agree with that one. I think ‘Glazed’ is- it’s actually going to be the next single that we release from the album. That one seems to be getting a really good reception and people seem to be digging ‘Flora’ too.

How was working with Jungle on the song ‘Raw Gold’ after touring with them?

It’s quite funky that one. It was great really, I mean obviously we know them well on a personal level but to get to work with them on a professional level was really interesting – one of the best things about touring with another band, whoever they are, is that you get the chance to learn from other people’s creative processes and how they’re different from ours. They’re so professional in everything that they do and the way they write songs is really different from how we would. I remember this one time we were in the studio with them working on ‘Raw Gold’ and they go “right so this is the part in the song where everyone puts their hands up” and we were like … hadn’t even thought about that, in terms of like, writing for the crowd. So yeah, that was really interesting and a really good experience.

How do the three of you go about creating a song?

I think for the majority of this record it was mostly stuff that I’d written – demos that I’d got to a certain stage of completion and then the guys kind of added to them and helped restructure it, so we kind of like go through that process together but for the most part it starts with something that I’ve made and it develops from there. It’s really great and that feeling of, I mean it’s a frustrating experience of writing a song but at the same time it is really rewarding, like that energy you get from the room when you’re all making headway on a song – that’s really exciting.

How does the new album artwork reflect the music? 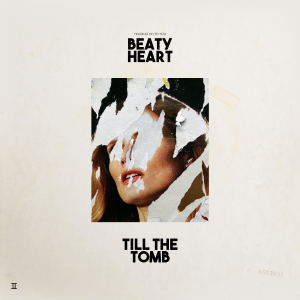 Well, I think that the artwork- it was somebody that we found on the internet- a French photographer and we liked that one because obviously the album name is Till the Tomb and the meaning behind that is that, like, that it’s ambiguous whether it’s referring to something light or to something dark so we felt that that photo represented that. It’s quite a beautiful photograph of this woman but then there’s the scratch marks down it, it’s something perfect that had been ruined or torn and that’s what the album is all about really. I think that’s really the theme of the lyrics and of the songs in general like, something on the surface that could be portrayed as one thing but on another level could be something else.

Massively cliché question, but where do you guys draw inspiration from given your different kind of sound?

Well this is a cliché answer but we do listen to a lot of music and it all seeps into what we try and do. I think we, with this one, obviously we’ve always listened to a lot of hip-hop, R&B and pop, I think that this one has a lot of influence from Arthur Russell, Lee Scratch Perry, just lots of sounds like, as well as, 70’s jazz records and soul jazz records, not so much in the way the songs are written but more in terms of the textures and tones, there’s that warm vinyl-like tone that we wanted to recreate; that kind of Motown vibe.

How excited are you for Bestival?

I really like playing festivals, there’s always such a good atmosphere. It’s just a good time and there’s always stuff to do while you’re waiting for your time on stage so that’s good! I think by the end of it, you’re really tired. I think there’s some festivals that really stand out and some that are that bit more generic, so it’s really exciting to go to a festival where you feel like it’s something you haven’t seen before so yeah, Bestival is going to be wicked – we’re all going for the whole weekend and are very excited about that one. I think a lot of bands do that because it’s the last festival on the circuit. Sean Paul – that’s insane. And the Cure! It’s going to be good. All good.

You can listen to the new album Till the Tomb here on Soundcloud and purchase Bestival tickets here, with a £25 deposit option and student discounts available. Bestival takes place from the 8th-11th September at Robin Hill Country Park on the Isle of Wight.