Read more
You are at:Home»Features»The rise and fall of two-part movies
By Rehana Nurmahi on August 5, 2016 Features

With the recent news that the final Divergent movie, Ascendant, is looking likely to be a TV movie rather than making it to the big screens; it would seem that the legacy of the two-part movie is nearly at the end of its short lived life. Perhaps Ascendant was just victim to the appallingly unfaithful adaptations of the series; but it seems more likely that this format just isn’t the right way to do movies. In the wake of this news, The Edge chronicles the rise and fall of two- part movies.

The first big box-office movie to arrive in two cinematic parts was the thrilling conclusion to the Harry Potter series, Harry Potter and the Deathly Hallows. Although the concept of splitting the novel into two parts was initially met with negativity from the producers, they soon realised that the scope of the narrative was not able to be recognised in the space of only one film. They therefore filmed the movie in principal photography as if it were one film; but then edited it into two parts, both being the length of the other films in the franchise. The format was something very different from anything we’d expect in cinema, bringing with it some pros and cons. Pros include a more faithful retelling of the novel, a heightened sense of anticipation before the finale (considering the 8 month wait between the parts), and obviously the doubling of profit for Warner Bros. However, problems were also found. The first film was considered by many as a drag, jokingly referred to by some fans as ‘Harry Potter and the magic tent’ due to the majority of the story focusing on the Golden trio moving from place to place. Contrasting this, the film’s next installment becomes like one extended battle sequence – though this makes for some spectacular footage, it’s not necessarily everyone’s cup of tea. There also comes the groans of fans who were still disappointed in the cutting of many scenes from the book, even with the 4 hour long runtime. That time also breeds yet more woe for when you’re watching the films; as it seems like you’re so close to the end but then you remember that there are still 4 whole hours left! Nevertheless, the films both did tremendously well at the box office, and influenced many other franchises to follow suit… 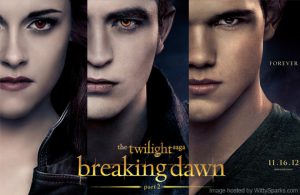 Following in Harry Potter’s foot steps, another young adult franchise decided that the only way to adapt this book was to release it as two movies: the Twilight Saga. The fourth book of the series (which admittedly does clock in at 754 pages) was always said by Stephenie Meyer to need two films to do it justice; but at one point didn’t even seem likely to be made. There was a lot of speculation about whether it could be done due to the nature of the character of Renesmee, Bella and Edward’s half human, half vampire child whose mental age massively outweighs her physical one. Also, due to the more adult nature of this story, there were questions about whether it would be able to have a PG-13 release or not. However, the studio managed to do it – twice – dragging out our suffering with Twilight for a whole extra year. Although it allowed for more truthful retellings of the source material, it seemed that they had a bit too much time. The second part features an almost half hour vision sequence for seemingly no reason other than to throw fans of the book off the scent of where the story is going. Both parts drew in considerable gains from the box office however, and fans of the books seemed to all be happy in the end. So all is well, I guess. 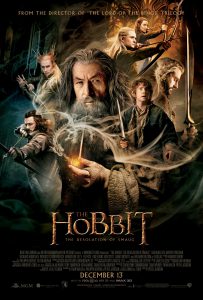 The next story to get the multi-film treatment was Peter Jackson’s version of the Tolkien classic, The Hobbit. When I first heard that The Hobbit was to be made into not just two, but three films, I was extremely confused. Purely because the book really isn’t big enough for that much movie to be drawn from it; especially if the movies were the length of the Lord of the Rings films. It’s pretty clear that money was the main reason for the story being split in this way, but it did allow for an epic trilogy of films. They tell not just the original narrative but built on the world to make it bigger, and draw in characters from the franchise that we already recognised. The films’ staggering runtimes seem unnecessary, and there is much debate over how many of the additions were actually beneficial. It did mean that some female characters were added to this sausage fest of a book; though there are still not nearly enough and Tauriel is simplified to a love interest even though she had such potential. The split also allowed for an in depth exploration of characters such as Bard, and saw the return of Legolas. As well as this, it made Tolkien’s world relevant and exciting for a new generation, in the same way that the Lord of the Rings films did a decade before. However, The Hobbit films didn’t quite live up to the hype in my opinion – and in this case just showed the multi-film format to be a money grabbing scheme, and an excuse to indulge in longer fight scenes.

The finale of another YA series (are you seeing a trend here?), The Hunger Games, was also made into a two part cinematic feat. Like the Harry Potter and Twilight movies before it, the films are all relatively long to begin with – so to watch the two parts consecutively does create a rather impressive overall runtime. Although with these films Francis Lawrence is much truer to the source material than his predecessor Gary Ross (who seemingly ignored the book), it again is only truly appreciated by fans of the source text. Mockingjay Part 1, though in my opinion a beautiful and harrowing adaptation with stellar performances, is considered the most boring of the series. There’s a reason why – the source content is. The first half of the book (and entire first movie) is about the development towards events in the latter half of the novel; so the film correlates to a build up to its sequel. This does create some suspense and excitement, but in truth, it just drags for those who are waiting for the action to kick in – which it never does. Sure, there are definitely some memorable moments (“If we burn, you burn with us” *goosebumps erupt*), but not enough to make it an exciting film in its own right without its second part. 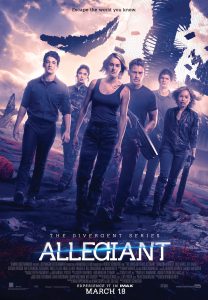 The final YA series to be caught up with the multi-film finale is Veronica Roth’s dystopian Divergent series. Truth be told, I gave up watching the films right after the first one.  The last half hour wasn’t even recognisable to the book, and not in a way that made it a better film! However, it seems that these movies seem to keep getting worse and worse; especially now the last one has been knocked down to a television release. In fact, the box office grosses of these films went from the first one making $54 million to the latest making only $29 million. Allegiant is often considered by many fans as being the worst novel of the trilogy; a disappointing ending to a good series. Many fans especially showed contempt at the ending, which I won’t ruin for anyone who wants to read them. Allegiant definitely could have been done in one film, and maybe if it had (and stuck to the source material) it would have been more successful.

It would seem that not every YA franchise under the sun feels the need to split their finale into two parts. For example, the final Maze Runner film has been kept as one solitary film, and hopefully this will be the case for any more YA films that arrive in the next few years. For the short while it lasted, the multi-part film saw many successes and provided some unique opportunities for these blockbusters. However, it would seem that the good was not quite enough to save the format, unless there’s a miraculous two-part movie revival.