Read more
You are at:Home»Features»Talking so brave and so sweet: when private love lives influence public music
By Camilla Cassidy on July 26, 2016 Features

A few weeks ago – when I began writing this article, though it is of course no longer the most exciting Swift-related event on the newsreel – the rumour mill began churning out the gossip that singer Calvin Harris was soon to release an autobiographical song regarding the breakup between himself and ex-girlfriend Taylor Swift. Or that he’d already written one. Or was soon to? Or it was about Tom Hiddleston instead? Something along those lines.

Though Swift’s camp has countered with claims that the song was written before their split, even the possibility of this reality existing is vindicating for some. Swift has long been marred by claims that she only knows how to write songs about her ‘long list of ex lovers’, such that it has become a point of recent self parody. This is, of course, a massive hyperbole. Furthermore, it is one at odds with both mine and Lily Allen’s opinion that the blatant hypocrisy wherein male singers can brag about their sexual conquests while women aren’t afforded the ability to occasionally lament a lost love soon has to stop. Regardless, however, it is clear that Swift’s love life is in the public eye – and is one which permeates through to affect how we feel about her music. Or, at the very least, which leaves us with a weird ‘behind the scenes’ feeling when we know what certain songs are about.

How does knowing the subject of a song affect how we regard it? 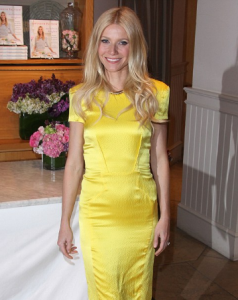 Image via The Daily Mail

Be they happy or sad associations, we know what they’re about. Public breakups such as Swift’s make the entertainment news, such that a musical response is actually almost expected. That song then becomes the one about them, this little mark that rests on the track’s Wikipedia page and that you can trot out as a fun bit of trivia, or use to win a pub quiz. Even when not centred around a public incident, the public knowledge of artists’ private lives leaves these little bits of affection as common knowledge. For example, Coldplay’s ‘Yellow’ isn’t just a generic love song. ‘Yellow’ is about Gwyneth Paltrow. While the personal motivation to create it surely made the music all the more powerful or touching, now it can leave you with this little wistful pause for a love life that isn’t your own.

The reverse is also true, of course. I remember when I learned that Sheryl Crow’s poignant, rhythmic tune ‘Leaving Las Vegas’ was autobiographical. Despite the fact she didn’t truly write it, I still found that oddly disappointing. It’s still not a song for you, the listener, anymore, you know? It’s a song about her. As an artist, she didn’t mean that song for me, or for you. That can’t help but change how you view a song, and your emotions when you listen to it.

But this doesn’t just happen on the part of the listener, of course. Among my favourite songs is Leonard Cohen’s ‘Chelsea Hotel #2’, from his 1974 album New Skin For Old Ceremony. In his raw, thick, whisky-rich tones the singer croons about a brief love affair in the Chelsea Hotel, which was at the time among New York’s most famous Bohemian hostels, and played host to creators from Bob Dylan and Charles Bukowski, to Tom Waits and Patti Smith. Arthur C. even wrote 2001: A Space Odyssey within its walls, and it was where Cohen spent his time while not at his home in Montreal. The song is visceral, a love song for ‘two ugly people’, and contains beautifully breathless lyrics, including “giving me head on the unmade bed, while the limousines wait in the street”. For several years when introducing the song, he told a story which made it clear that he was speaking of Janis Joplin.

Cohen would eventually come to deeply regret his choice to make people aware that the song was about Joplin, and the graphic detail in which the song describes their brief relationship. In a 1994 interview on BBC Radio, Cohen apologised, and even referred to it as “the sole indiscretion in my professional life… Looking back I’m sorry I did it. There are some lines in it that are extremely intimate.”

When something is in public knowledge, it can’t be taken back. You can never un-learn it, and nor can the artist ever un-tell it. I wish I didn’t know which bits of Lord Of The Rings were superimposed, for instance. Doesn’t it always detract from when you’re watching that bit? You won’t love it any less, and you’ll still enjoy it. But it’s suddenly some kind of other, some kind of different. The scene, or song, is never the same.

Facts and stories from a creator are forever linked with what they produce, and whom it is about, be that with their consent or not. What was intended for Cohen as a wistful tribute is now and forever an association with someone who never asked to be involved. The best of intentions can turn sour. In the more topical Swift and Harris case, it can’t help but rub me the wrong way that songs can now be released as parts of private tiffs turned public as smear campaigns.

In the era of the 24 hour news cycle, we’re going to know ever more about the private lives of our stars as they merge more and more into their public personas. Inspirations far and wide have always influenced the artistic works they produce; but when knowing these influences is inescapable, we as consumers may need to decide how much we should chose to invest in them.

And, of course, what right we have to know about them in the first place.