Read more
You are at:Home»Features»The problem with idolising celebrities
By Rehana Nurmahi on July 22, 2016 Features

During the past week, I have been let down immensely by someone I thought would always be there for me; someone whom I always defended to the end of the world. That person was Taylor Swift.

I know, I know, the fact that Taylor Swift was a hero to me is something to make many shudder, and many eyes roll. But look at it from my perspective; Fearless came out when I was 11 years old, so throughout the whole of my teenage life, Taylor’s music has been a constant companion, and at times, a friend. Then as I got more invested and became a self-declared ‘Swiftie’ (to use technical terminology), I became more fascinated by the woman behind the music, and thought her to be a passionate, dedicated, and wise person in the industry. Here was someone who genuinely cared for fans, someone who seemed to understand the concept of being an outsider who makes mistakes, and someone who expressed her love and loss through creativity. She was someone I looked up to, and the prologue written in the lyric booklet from Speak Now is in fact still up on my bedroom wall. 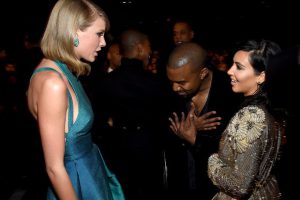 In recent times however, while Taylor has been in the middle of a relatively negative media storm, I have been left quite confused. Because for one of the first times in my teenage life, I have found myself not taking Taylor’s side. In fact, I, like Calvin Harris, got rather frustrated by how she revealed her writing on ‘This is What You Came For’. I, like Kanye and Kim, thought that although the lyric was offensive, at least Kanye asked whether he could use her name on his record, ‘Famous’. Don’t get me wrong, I’m not suddenly declaring a war on Taylor Swift, and I will always be a fan. I am, however, re-evaluating the light in which I look at her, and it has been a very important reminder to me that we cannot idolise celebrities.

I’m not saying that we cannot like celebrities, or look up to them, or not feel as if they can help shape our identity and growth. The problem comes when we ‘other’ them, and forget that at the hearts of these people are just that – people. Human, living, breathing, people. People with emotions and friends and family and regrets and flaws. As John and Hank Green often say on their YouTube channel, we have got to “imagine others complexly”; we cannot see these people on screens and forget the human nature that underlies their every decision.

Taylor Swift is someone of whom the media has always had something to say about, and many times, it has not been something nice. She’s been labelled a slut and a flirt, and is constantly criticised for writing about her personal experiences. This has always seemed strange to me. If a normal friend of ours, someone not in the limelight, had dated six people in the space of three years, would we really be judging them the same way we jump to judge Taylor? Is writing about the people who have influenced our lives, be it for better or worse, really a bad thing? I don’t think it is, and if I did, I’d be a hypocrite, because I’m one of those people who tends to use poetry as a way to vent about my personal experiences. Taylor Swift has even said it herself; why is it that people get on her case for writing about her past relationships, when nobody says the same of Ed Sheeran or Bruno Mars or any other number of male artists? Even in the recent debate with Kanye and Kim, Taylor makes a fair point; she is allowed to have an emotional response to being called “that bitch” in front of the whole world, and that’s because she’s human.

It is so important to remember that the only thing that sets these people apart from us is their platform, and at the end of the day, like us, they’re just trying to live their lives. They are going to date people, and get things wrong, and they are going to say things that they wish they didn’t – unfortunately, these things are going to be broadcast to the whole world. I do think that there is a level of responsibility that comes with being a celebrity, and I think the way in which you respond to fans says a lot about the way you view that responsibility. These are the people who have given you your status and ultimately your power, and if you see yourself as one of them rather than above them, I think it’s a reminder that you yourself have not forgotten your own sense of humanity. 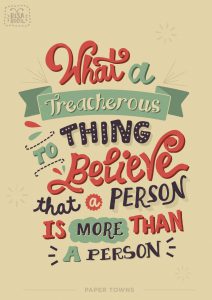 I think the problem is, where in our culture we are so determined to ‘other’ celebrities, celebrities start to ‘other’ themselves, and this is where the problems start to arise. If these people, who have a lot of sway in the media, begin to see themselves as more than they are, they will push the concept of ‘celebrity’ further, and the concept in itself is a dangerous one.

Celebrity status is a social construct, and the more we enforce it, the more we treat famous people as gods rather than people. When we do this, we find ourselves let down by them so much more, because the stakes and expectations are so much higher. I think that if we remembered that celebrities are humans just like us, I think the way in which we aspire to be like them would be very different. We would still be able to look to them, and still be able to say that they inspire us, but we would do this without the fear of never reaching their status.

Returning once more to the words of John Green: “What a treacherous thing to believe a person is more than a person.”